Chocolate is the food that is obtained by mixing sugar with two products derived from the manipulation of cocoa seeds: cocoa mass and cocoa butter. From this basic combination, the different types of chocolate are elaborated that depends on the proportion between these elements and their mixture with other products such as milk and nuts. 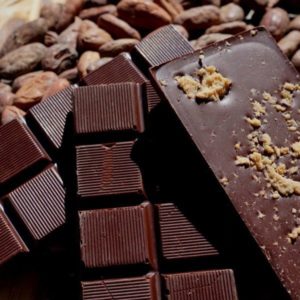 Cocoa has been cultivated by many cultures for at least three millennia in Mesoamerica. The earliest evidence of the use of cocoa belongs to the Moka culture and to Mexico, with traces of chocolate drinks dating from 1900 B. C. However, the Olmecs of La Venta in Tabasco were the first humans to taste, in the form of a drink, the ground cocoa beans, which they mixed with water and added various spices, herbs and chilli peppers and they were also the ones who started to grow cocoa in Mexico. In fact, most Mesoamerican people made chocolate drinks, including the Mayas and Aztecs.

The cultivation, use and cultural elaboration of cocoa were early and extensive in Mesoamerica, to which the cacao tree is native. When pollinated, the seed of the cocoa tree finally forms a kind of pod of 10 to 35 cm long hanging from the branches, inside the pod, there are 30 to 40 brown-red almond-shaped grains embedded in a pulp sweet and slimy. Beans are bitter because of the alkaloids inside them, the sweet pulp may have been the first element consumed by humans. Evidence suggests that it may have been fermented and served as an alcoholic beverage as early as 1400 BC.

Benefits of cocoa for your health.

Although chocolate is commonly eaten for pleasure, there are beneficial health effects associated with its consumption. Cocoa or dark chocolate benefits the circulatory system. Other suggested beneficial effects include anti-cancer effect, brain stimulator, antitussive and anti-diarrheal. An aphrodisiac effect has yet to be proven. 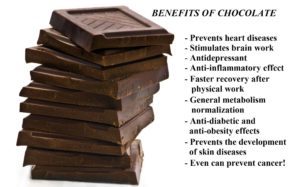 On the other hand, the uncontrolled consumption of a large quantity of any food rich in calories, such as chocolate, increases the risk of obesity in the absence of a corresponding increase in physical activity. Raw chocolate is rich in cocoa butter, a fatty component that is removed during the refinement of chocolate and then added again in varying proportions during the manufacturing process. Manufacturers can add other fats, sugars, and milk, all of which increase the caloric content of chocolate.

Recent studies suggested that cocoa or dark chocolate may have certain beneficial effects on human health. This is mainly caused by a particular substance present in cocoa called epicatechin. Cacao possesses a significant action as an antioxidant, protecting against LDL oxidation, perhaps more than other foods and drinks rich in antioxidants polyphenols. Some studies also observed a moderate reduction in blood pressure after ingesting dark chocolate daily.

There has been a diet called “Chocolate Diet” that emphasizes eating chocolate and cocoa powder in capsules. However, the consumption of milk chocolate or white chocolate, or whole milk with dark chocolate seems to largely negate the health benefit, processed cocoa powder (also called Dutch chocolate), processed with alkali, greatly reduces the antioxidant capacity compared to raw chocolate powder.

The processing of cocoa with alkali destroys most flavonoids. A third of the fat in chocolate comes in the form of saturated fat called stearic acid and a monounsaturated fat called oleic acid. However, unlike other saturated fats, stearic acid does not raise LDL cholesterol levels in the bloodstream, and consuming relatively high levels of dark chocolate and cocoa does not seem to raise serum LDL cholesterol levels and some studies indicate that in fact, small but regular amounts of dark chocolate lower the possibility of a heart attack, a result of cholesterol imbalance according to the lipid hypothesis.

People believe that chocolate can cause acne, this belief is not based on scientific studies. Several studies point not to chocolate but to the high glycemic nature of certain foods such as sugar, corn syrup and other simple carbohydrates as a cause of acne. The chocolate itself has a low glycine index. Other dietary causes of acne cannot be excluded yet, but a more rigorous investigation is required.

Chocolate contains a variety of substances, some of which have an effect on our organic chemistry. These include Sugar or occasional sweeteners. Theobromine, the main alkaloid in cocoa and chocolate and partially responsible for its stimulating effect. Tryptophan, essential amino acid and precursor of serotonin. Phenylethylamine, an endogenous alkaloid sometimes described as a love chemical, is rapidly metabolized by mono amino oxidase B and does not reach the brain in significant amounts. Caffeine, present in low amounts.

One of the best chocolates in America is that of Costa Rica.

Costa Rica has one of the best chocolates in the Americas. Costa Rica’s cocoa is next to coffee and bananas, as the most important agricultural products for export, with a significant impact on the economy, culture and national identity. Its production represents 5% of the international gourmet grade export market, something special since only 10% of global suppliers can qualify as gourmet.

Somewhat forgotten in the Central Valley has been the influence of cocoa in the confirmation of the Costa Rican culture, but its imprint in the collective imaginary is indelible because it is the thread of the socio-economic conduct between ancestral indigenous culture and post-Columbian history. It has appeared cyclically at key moments, normally associated with the Caribbean area and its predominant cultures: the indigenous and Caribbean, both with an undeniable contribution to the national culture.

For millennia, hundreds of generations have survived in the shade of cocoa, children have sucked their seeds to clean them secretly from their parents, young people have waited for the sun every day to dry them and there they have found their partners, the elderly take care of all the details and rites to obtain the first “grain of gold” of Costa Rica.

Before the Spanish colonization and it is not known since when, the cocoa seed was used by the natives as a means of economic interchange, it was recorded in the descriptions of the zones of Nicaragua and Costa Rica by the conquistador Gonzalo Fernández de Oviedo at the beginning of the century XVI. In 1709 the governor Lorenzo Antonio de Granda y Balbín declared the cocoa nuggets as official and as acceptable means for commercial exchange in all circumstances for the inhabitants.

A real, the basic unit of the Spanish monetary system coined in silver, was equivalent to two reals of cocoa, that is to say, one hundred and sixty cocoa seeds, since the one real of cocoa constituted, in general, eighty seeds. Although cocoa was banned as currency at the end of the 18th century, its use for barter continued even during much of the 19th century, given its commercial importance.

The cultivation continued steadfastly until 1979, with the appearance of the Monilia fungus, which damaged the crops and produced a drop in their production. Around 1985, with the help of the Tropical Agronomic Center, CATIE, the species, and agronomic techniques were strengthened, and it took a new boom with organic crops, from which it is positioning itself as a gourmet quality product, bringing fresh resources to communities of the Caribbean and  Talamanca, and consequently reactivating the culture of cocoa.

At the end of the decade of the 1980s in the country, there were three industries and twelve exporting companies of cocoa. They emphasize the formation of alternative commercialization oriented to give a better return to the producer using cooperatives, associations of producers, and cantonal agricultural centers. Among the main ones were: Costa Rica Cocoa Productos, El Gallito Industrial Limitada, Process and Bering, and Hering.

In 1984, significant progress was made with the start of the Cocoa Promotion Program. In support of this in 1988, the Center for Food Technology Research (CITA) structured a research and transfer program, achieving important advances in fermentation, design of beneficiary plants and quality assessment. By 1994, 14,000 hectares were rehabilitated, reactivating export and local consumption of some 7,200 MT.

The projects of COOPEFRUTA in Quepo, COOPALSUR in Palmar Sur, CEE in Puríscala, UNCASUR in Golfito and ASPROCA in Laurel stand out. In 2007, CANACACAO was created by 12 associations and companies who had the vision to appreciate the potential that exists in Costa Rica to become a recognized supplier in the world market of high-quality cocoa, produced responsibly in terms of social and environmental standards.

By 2013, some individual experiences with clonal gardens of highly productive and disease-resistant hybrids, both in private farms and in official research centers, have obtained varieties of cocoa that turn out to be very resistant to diseases and productive under “organic” farming conditions. “The market has favored aroma and organic cocoa, preferring an important rebound in prices and overpricing due to its characteristics.

The lands of Costa Rica have many of the best characteristics for a successful high-quality cocoa crop, in terms of acidity, humidity, water table and composition. Given the scarcity of economic activities that help raise the quality of life of the inhabitants of agricultural areas, especially activities that imply a low impact on the environment, the possibility of reactivating the cultivation of high-quality cocoa as an alternative is very relevant. Such is the case of the Talamanca area, in the South Caribbean, where productive projects have been developed in peasant and indigenous communities, combining ecotourism and agrotourism with the production of organic cocoa and plantain.

Many of these have had the participation of non-governmental organizations such as ANAI and environmental activists such as Ibo Bonilla and Benson Venegas. Also noteworthy is the initiative to improve cocoa production and conserve the biodiversity of the Talamanca area in Costa Rica with the Conservation of Biodiversity and the Sustainable Production Project in small indigenous farms that produce organic cocoa in the Talamanca-Caribbean Biological Corridor. The project involves indigenous people from the Bivirí and Cabecear cultures, two of the most important in Costa Rica.

Costa Rica’s cocoa is now found in national and international airports and organic and delicatessen stores in many countries. Today, more than 2,500 families, mostly located in the northern zone, in the Huerta Atlántica region, and in the Branca region, maintain the best conditions for the 4,000 hectares of high-quality cacao sown on the Costa Rican soil. If in the 90’s production decreased due to the arrival of Manila fungus, distribution of unproductive genetic material, low world prices and government incentives to other crops.

In the second decade of the 21st century, the cocoa sector is expected to rise due to the better conditions of the raw material, the improvement in international prices and the rise of chocolate companies willing to transform the grain into delicate bars and fine chocolates made in a natural organic way. Cocoa, like mystic stone spheres, remains strongly rooted in the collective unconscious, as a living connection to ancestral roots, for chocolate and the taste of cocoa is the flavor of history.