A brief summer is a break that occurs in the middle of the rainy season. It receives this name because there are dry and sunny days (or with very little rain, less than or equal to 1 mm daily). That is, the conditions of the dry season return, but for a few days only.

In the particular case of the “Verano de San Juanillo” (San Juanillo Summer), it is the first of the year and was given that name since it usually occurs around June 24th. Based on the Catholic calendar, the birthdate of St. John the Baptist is commemorated, who would have been born 6 months before Jesus Christ (December 24th), according to the Holy Scriptures.

In Costa Rica, this summer is usually presented after June 21st, with a duration of 3 to 6 days, exclusively affects Guanacaste and the Central Valley.

This year, it is estimated that this brief summer would be ahead compared to the date used as a reference (June 24th). The period most likely to occur would be between June 14th and 23rd, when a noticeable reduction in the amount of rain is expected. 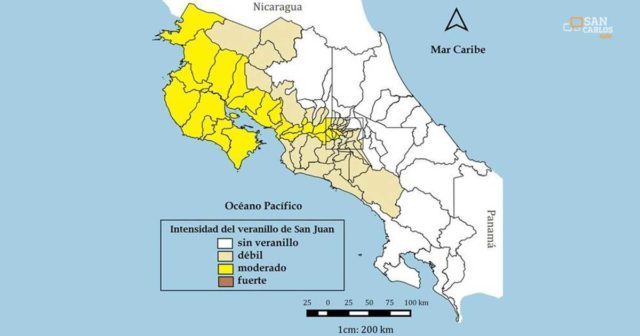 The photo shows the intensity and regions where the “Verano de San Juanillo” would be perceived. Areas with moderate summer have the possibility of presenting dry and sunny days; with a weak level, those that will have a partial suspension of the rains; in blank areas, it will not be present.

How Costa Rica’s Climate Makes It a Tropical Paradise

Project Analyzes the Effects of Climate Change on the Relationships among Species of Plants, Birds, and Insects

Amphibian Decrease Associated with Pollution and Climate Change, according to the UCR