The in-situ condition of forest species in danger of extinction in Costa Rica was studied, in order to contribute to their recovery and survival, for the benefit of forest ecosystems and society.

The species studied were selected according to the CITES (Convention on International Trade in Endangered Species of Wild Fauna and Flora) and the lists of the International Union for the Conservation of Nature (IUCN) where they are classified as native species in critical danger of extinction.

The main species that could disappear from our biodiversity are the following:

Anthodiscus chocoensis, ajo negro, is a plant species of the Caryocaraceae family. From Colombia, Panama and Costa Rica. It is normally found in small remnant wooded areas, disconnected from each other, in the central and southern Pacific of the country.

In its natural habitat, it is scarce, because its populations are naturally formed mainly by scattered trees, and/or the intense exploitation to which it has been subjected. The present populations are composed of few adult trees, with the scarce presence of young individuals and seedlings in the lower strata and the forest floor. The tree crown reaches the upper canopy of the forest, being a heliophilous species in its maturity.

The environmental conditions required by juveniles are not clearly determined, but field observations suggest that seedlings do not survive in dense forest conditions at a low level or at the ground level. Better germination and survival of seedlings are observed in clearings within the forest.

The flowering occurs mostly between the months of March to May, simultaneously with the production of new leaves. The fruits reach maturity mainly between August and November. The fruits contain 12 capsules and generally have between 6 and 12 seeds (one per capsule), which remain inside the fruit during germination.

At the field and greenhouse level, it has been observed that only one seed per fruit germinates. The causes of this are unknown. In greenhouse conditions located at 1240 amsl, germination was slow, irregular and low, taking between 6 months and 18 months, obtaining seedlings in no more than 15% of the fruits.

The growth of greenhouse seedlings was also slow, reaching an average height of 27 cm in height at 9 months, for a sample of 20 seedlings. The small size of the remaining populations and the available habitat, the low abundance of the species within the forest, the genetic erosion and the apparently low rate of natural reproduction suggest a high possibility that the species is in critical danger of extinction and that their populations may be below the “minimum viable size”.

It is necessary to carry out detailed studies on its reproductive biology and its population dynamics, as well as on its genetic variation and the levels of inbreeding that it presents in the forested islands it inhabits, in order to define an adequate conservation strategy. It is also necessary to develop techniques that allow their reproduction and ex situ conservation. 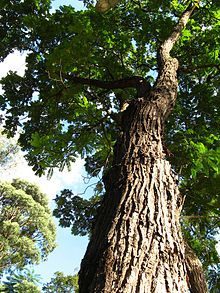 The missionary cedar or ygary is a botanical species of tree of the dicots class, family of the Meliáceas of tropical regions of America. Native to Central America and South America. It is a tree of humid and dry tropical forests. It does not resist winds, frosts or droughts. It has an important shaft that can reach 30 m in height. The trunk can measure 10-15 mm in diameter.

Although the species is cited as deciduous in its area of origin, when cultivated in the NOA it maintains the foliage in the winter. An important species of the forest occurs with high frequency and abundance throughout the area covered by tall forests.

Colonizing where there is enough light to make rapid growth. Diameter (cm / year): 0.69 Height (m / year): 0.9 Volume (m³ / year): 0.04 Cedar is planted at low densities, because a high density attracts the Hypsipyla grandella Lepidoptera or wood borer, whose larvae destroy the apical bud by decreasing the vigor of the tree and in turn its commercial value since the stem tends to branch out. A solution to the problem of Hypsipyla grandella has not yet been found.

The bark is febrifuge. It is a melliferous tree. Its reddish-brown wood is very appreciated for its quality; it is used in all kinds of carpentry, furniture, coatings, and naval constructions. It is a light to medium wood with very good physical-mechanical characteristics and excellent dimensional stability. The pod of its seed is also used in several countries to make fancy jewelry.

The cypress, pine, or pinillo, is a species of conifer in the Podocarpaceae family. It is endemic to Belize, Colombia, Costa Rica, El Salvador, Guatemala, Honduras, Mexico, Panama, Venezuela. It reaches up to 30 m in height and 80 cm in diameter, narrow crown, straight shaft, brown-reddish bark, scaly, thin branches. Leaves are simple, alternate, lanceolate, 6-10 cm long and 1-1, 5 cm wide, with its central rib compresses towards the wedge of its base and narrow at the apex, the leaves of old branches are 1-2 cm smaller in length and width. Dioecious flowers (rarely monoecious), male solitary or grouped in the armpits of the leaves, pedunculated;

No male cones, female, cylindrical, axillary, peduncle 3 mm long. Elliptical seeds, 6-9 mm long, 5 mm wide, with the conical ridge. It is threatened by habitat loss. Included in Costa Rica’s list of threatened and rare plants (IUCN, 1988). It is protected in the Osa Conservation Area (Marenco Biological Station) and the Guanacaste Conservation Area (Rincon de la Vieja National Park). It is the only native species of lowland and humid to a very humid climate, at altitudes between 50-1,500 amsl, and precipitation exceeding 2,500 mm / year.

Teams of investigators went for up to six days into the mountains and still did not find specimens of several species of trees that were considered in danger of extinction in the country. Of the list of 18 species in this category, the specialists could not see 11 of them in the course of the exploration.

To some extent, this warns of its critical state, which allows us to even think that some of these species may already be extinct in Costa Rica, according to the National Forest Inventory (INF). The INF was an initiative led by the National System of Conservation Areas (Sinac) and financed by the Regional Program REDD / CCAD-GIZ. Its goal was to calculate, for the first time in Costa Rica, exhaustively and with scientific rigor, the forest stocks that are counted, as well as to characterize them and evaluate their status.

Having found 70% of the forest species in the country in the inventory and that these 11 did not appear, it suggests that they may not exist anymore, “said María Isabel Chavarría, Coordinator of Forest Monitoring of Sinac. The species that were not observed were the corrí or quirá (Caryodaphnopsis burgeri), royal cedar (Cedrela fissilis), camíbar (Copaifera camibar), black laurel (Cordia gerascanthus), cachimbo (Couratari scottmorii), royal guayacán (Guaiacum sanctum), chirraca (Myroxylon balsamum), sangrillo colorado
(Paramachaerium gruberi), giant tamarind (Parkia pendula), cypress or pinillo (Podocarpus guatemalensis) and toasted (Sclerolobium Costarricense).

Included in the decree.

The 18 arboreal species listed as endangered are included in Executive Decree No. 25,700 – Minae, dating from 1997, which prohibits their use. In fact, this decree was based on research carried out by the scientist Quirico Jiménez, in 1993, and later updated in 1999. In the study, 34 forest species were identified that were in critical danger of extinction, since their populations were reduced due to deforestation and overexploitation of wood products.

According to Chavarría, the INF intended to verify that information in the field and update it, in order to guide the inclusion or exclusion decisions of species in this closed list. “The inventory gives us many good clues, but we still have to carry out a more thorough analysis,” said Chavarría.

Costa Rica has 2,040 species of trees; that is, 20% of the world flora is represented in the national territory. Of that figure, 130 tree species are under some type of threat. According to the criteria of the International Union of Conservation of Nature (IUCN), there are five risk categories: critically endangered, endangered, threatened, and vulnerable and of minor concern.

On average, per hectare (ha), 19 trees of different species are in critical danger of extinction. Mature and secondary protected forests function as large reservoirs for these species. In this sense, mature forests have 39 trees/ha while the number corresponding to secondary forests is 30 trees/ha. 79% of the species in danger of extinction are found in the North Pacific and the Central Valley, followed by the Central Pacific and theSouth Pacific, with 12%.

Considering all forest categories and strata, Costa Rica has an average of 67 trees/ha under some type of threat. The majority are present in mature forests (157 trees/ha), palm forests (87.8 trees/ha) and secondary forests (80.2 trees/ha).