To the magical rhythm and with colorful masks, the Boruca indigenous people celebrate “el baile de los diablitos” (the dance of the little devils), a tradition that recalls the struggle that this indigenous community waged against the Spanish during colonial times.

At the time of contact with Europeans, the Boruca people were grouped into three kingdoms: Quepoa, Trucara and Coctú, which were located throughout the central and southern Pacific region of Costa Rica.

These kingdoms had a great abundance of natural resources, but they also had a great tradition in the elaboration of gold objects and stone spheres, which are currently symbols of national identity in Costa Rica.

When the Spanish conquerors arrived in the country in the 16th century, the borucas were one of the groups that most resisted the conquest, having several strong confrontations. Juan Vázquez de Coronado, advance mayor of Costa Rica, visited the region in 1563, documenting the existence of fortified populations, called palenques, in addition to recording the fierceness in combat of indigenous people, including women, who made up a warrior class , the baritics.

The baile de los diablitos is considered a way to recall these struggles.

Other authors consider that the tradition could well be older, prior to contact with Europeans, but that new elements were added upon their arrival, such as the bull, an unknown animal for pre-Hispanic aboriginal peoples.

A large number of pendants and gold artifacts representing masked characters, musicians and dancers have been recovered from the southern part of the country. 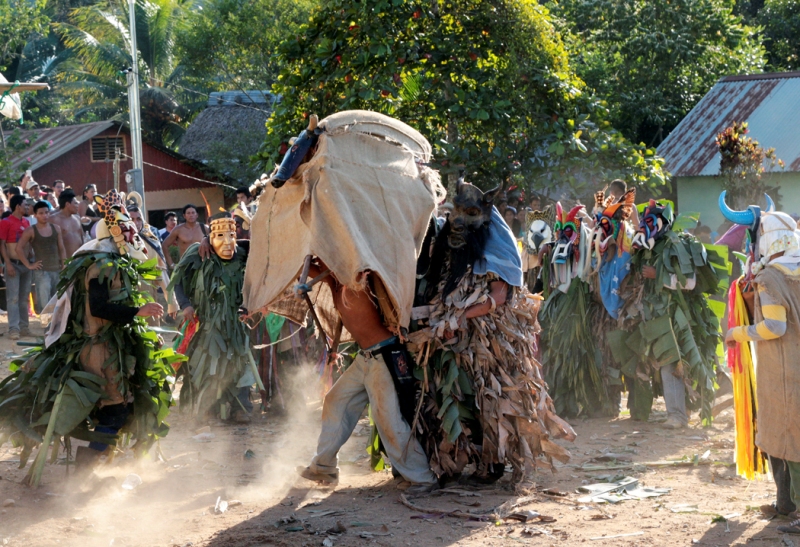 The diablitos (cagrúv) represent the indigenous Borucas, and are hierarchically organized. There is a boss called Diablo Mayor, who has several helpers at his disposal. In Boruca, the older devils are distinguished by wearing a jacket, while in Rey Curré they dress in the traditional gangoche costume.

The older devils are responsible for the smooth performance of the dance, ensuring that the rules  are followed and punishing those who disobey. The older devils, in general, have their faces uncovered. The rest of the little devils are minor devils. There are also minor devils, who are men dressed as women.

It is worth emphasizing that only indigenous people can participate by dressing up as devils during the celebration. Tourists can watch but are not allowed to participate.

Every devil has a task in the dance

The bull is a unique character, representing the Spanish conqueror. The bull mask is made of cedar wood, painted with black and white lines, has natural bull horns, and is the only one that is saved for the next celebration. The costume has a guava wood frame covered with hook, with the mask of the bull’s head on the front. At some point during the celebration, branches and leaves are added that will later be burned.

In addition to the devils and the bull, there is the participation of several musicians who play the flute, the traditional drum called cajón, the guitar, the violin and the accordion.

Deputies from the 6 fractions with representation in the Tico Congress gave their signatures to promote the declaration of...
World News

Neither Age nor the Evolution of Society Stops Amanda Moncada