The traditional ox cart is the most famous type of craftsmanship in Costa Rica. Since the mid-nineteenth century, oxcarts were used to transport coffee beans from the central valley of Costa Rica, in the mountains, to Puntarenas, on the Pacific coast. A trip required 10 to 15 days. 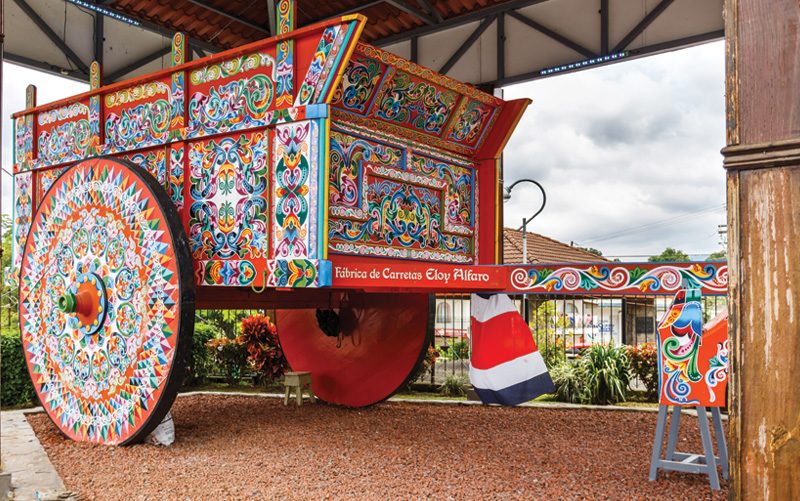 Ox carts had wheels without radii, a hybrid between the disk used by the Aztecs and the wheel introduced by the Spaniards, to advance in the middle of the mud without getting stuck. In many cases, oxcarts were the only means of transportation for a family and symbolized their social status.

The tradition of painting and decorating carts began in the early twentieth century. Originally, each region of Costa Rica had its own design, which allowed identifying its origin by the themes painted on the wheels. At the beginning of the 20th century, flowers, faces, and miniature landscapes began to appear next to the motifs that represented pointed stars. Annual competitions were organized to reward the most creative artists, a custom that still exists today.

Each ox cart is built to produce its own “chant”, a unique carillon produced by a metal ring that hits the wheel hub when the cart rattles on the roads. When the ox cart became a source of individual pride, they were built with more care, selecting the best quality woods to produce the best sounds. The variegated and richly decorated carts of today are little like the original rectangular vehicles, with a box of cane and crudely carved and covered with rawhide.

In most regions of Costa Rica, trucks and trains have replaced oc carts as the main means of transport, but these are still strong symbols of the country’s rural past and occupy an important place in parades, religious and secular celebrations.

With ox carts gradually turning into an obsolete means of transport, the demand for them has been reduced, and therefore the number of craftsmen who master the technique to make and decorate them has also decreased in recent decades. The purpose of the safeguard project is to help revitalize and preserve the tradition in Costa Rica through education and awareness-raising activities, empowering the ox cart artisans and develop an inventory of historical related data. A national network will be established to safeguard and revitalize the tradition and training workshops will be organized on cultural and resource management.

A digital inventory will be created that contains the diverse expressions of the tradition of ox carts and a practical manual that describes the technical and artistic processes that take part in its construction and ornamentation.

One objective of the project is to enhance the skills along with the artisan organizations, to propose and manage current and future safeguarding activities in cooperation with the government, civil society, and the private sector. In addition, the plan aims to sensitize the public about the importance of this tradition.

The “Boyeo”, a trade that passes from generation to generation.

Carchi arrives petitions from all over the country, by ox cart lovers who make orders for building and painting them to their personal liking, because they have become a souvenir. Many of the orders also go directly to preserve another custom, the “Boyeo”, a trade that passes from generation to generation.

In addition to the breeding and caring for the oxen, this practice requires that the “Boyero”, as is called the person dedicated to this task, learning to handle with skill and cunning, oxen for transport and fieldwork. At the same time, making the animals get used and at ease with their master, the yoke and the cart.

Although sometimes separated by great distances, Boyeros and ox cart artisans are connected by the same commitment, revitalizing this practice. The stimuli of the “chuzo” (a big stick to direct the oxen) and the orders of the master, that with the daily chores are converted in mutual gestures of affection, trust, and obedience that facilitate the field work. The chuzo allows to establish hierarchies, but it is not used to attack the animal.

Plow the field, spin the wheels of the “trapiche” (mill), transport firewood, sugarcane, corn, and other products, taking the coffee to the places of exchange for salt and grains, transport the sick, or simply go for a family ride. These have been some of the functions that oxen and ox carts have allowed in Costa Rica. All this accumulation of knowledge and skills, intangible and imperceptible but rooted in the collective memory, have contributed, to some extent, to the definition of the Costa Rican identity.

Originally from Spain, the Costa Rican oxcart arrived in the country in the sixteenth century and today is the product of a series of adaptations to the local geography. The “cureña” was a very simple type of cart, made of logs, sticks, and reeds used to transport wood, with a triangular base. Another variation occurred in Guanacaste, where the cart has been commonly used without painting.

In the Central Valley, it was refined in structural and aesthetic terms. In order to cope with the loading of the coffee to the port, its various parts were modified to obtain a stronger and lighter cart. The wheel also had its changes. At first, it was made up of spokes (rods that joined the shaft with the wheel rim) or in one piece. Then the three-piece wooden wheel was implemented. Later, this design was improved to one made with sixteen wedges, adjusted by an iron ring.

The so-called “singing of the cart” is a sound emitted by its horn and its axis. This harmonious special sound on each cart distinguished the owner and alerted the acquaintances upon arrival. It was as important as the decoration when choosing a cart. And it has inspired writers and poets, over time.

At the beginning of the 20th century, colors acquired a primordial place. Designs and paintings gave life to the decorative style that we still see. Characteristic of the Central Valley, the painting on the carts was inspired by the environment and responded to the need to highlight and enhance this vehicle that had supported the development of the country.

It was when the cart was displaced by other means of transportation that the need to decorate it was felt. Cartago, Alajuela, Heredia and San José are the provinces that have cradled this tradition. The artisans have inherited the art of ox cart making for generations and gave a particular style to the decoration according to their locality. However, in many of these places, technological changes have caused the disappearance of this practice.

The tradition of the Costa Rican boyeo and the ox cart officially declared of public interest.

On August 7, 2012, with the publication of the Official Gazette, the “tradition of Boyeo and the Oxcart in Costa Rica”, were converted into an activity of public interest in the Costa Rican territory. This proclamation is achieved with the support of Alfio Piba Mesén, Vice President of the Republic, and Manuel Obregón, Minister of Culture and Youth, who signed Executive Decree No. 37220-C. The declaration of public interest supports the proclamation of the United Nations Educational, Scientific and Cultural Organization (UNESCO), which on November 25, 2005, declared the “tradition of Boyeo and Ox Cart in Costa Rica” as Masterpiece of the Oral and Intangible Heritage of Humanity.