Parque Morazán (Morazan Park), in San José, Costa Rica, is one of the most important urban spaces of this Central American capital, as it is constantly used for many cultural events and activities. Located between Calle (street) 3 and Avenida (avenue) 7, in the district of El Carmen, it is surrounded by important historical buildings and public places, such as the Metálico Building, Las Acacias House, the Vitalize Madrigal School, the Aurora Holliday Inn Hotel, the Jiménez de la Guardia House, the Maroy Building and the España Park. 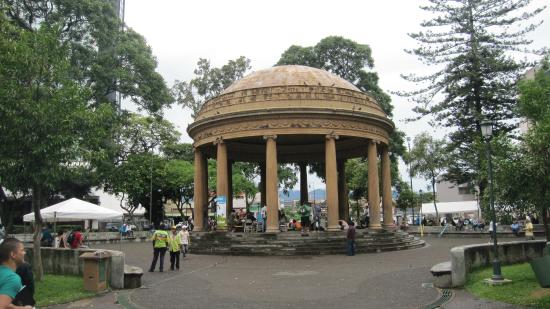 It is part of an urban axis that connects the National Park with the Morazán through the Paseo de las Damas, one of the main avenues of the Costa Rican capital. Baptized in tribute to Francisco Morazán, head of state of the country during 1842 and leader of the Central American Union.

History of the park.

La Laguna Plaza was initially called in 1887 because it was erected over a small lake in which the inhabitants of San José of the nineteenth century obtained the mud necessary to make the adobes with which they built their houses. There the New Year holidays were celebrated. The lake, of artificial origin and known as the Villanueva well, was known at least since 1790.

In 1808, the then Spanish governor of the Province of Costa Rica, Tomás de Acosta, had urged the authorities to dry out the place. Around it, there was a ditch, called Las Arias, so some families had begun to settle, forming a neighborhood called La Laguna. Between 1853 and 1856, President Juan Rafael Mora Porras ordered the construction of the National Liquor Factory in the neighborhood, which came to consolidate the housing presence in the area.

For sanitary reasons, in 1877, the government acquired the land, drained the lagoon and in 1881 allocated 1,500 pesos for the construction of a square, glimpsing what would be the second Josefino Park after the Central Park. 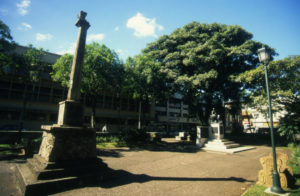 After the death of President Próspero Fernández Oreamuno in 1885, the liberal elite of the time decided to build a monument to honor him. The work was entrusted to the sculptor Francisco A. Durina Vasalla (uncle of the Italian-Swiss artist who left great artworks in Quito) and the marble bust was inaugurated on August 10, 1887, by President Bernardo Soto Alfaro, later on, it was taken to the old square of the La Merced Church, southwest side of the current Central Bank of Costa Rica, until, at the request of his widow Cristina Guardia Gutiérrez, it was transferred to Alajuela, where it is today in the park that bears the name of the former president.

The lots near the original site were expropriated to consolidate the public space, this public space was named (by the government then in office, which never explained why) in honor of the Honduran general Francisco Morazán, who had been shot in the Main Plaza, today Central Park, on September 15, 1842.

This decision unleashed a great controversy, due to the contrast between the two military leaders: while Morazán had been a champion of the union Central American, Fernandez had prepared himself militarily to defend the independence of Costa Rica from the intention of the Guatemalan Justo Rufino Barrios to rebuild the Federal Republic of Central America by force.

The government, however, remained silent and the public works of the space were entrusted to engineer Juan de Young. In 1910 an elegant octagonal floor kiosk with a nouveau art theme was commissioned, by the Civic Festivities Commission, which then would be replaced by the Temple of Music present today.

José Francisco Morazán Quezada (Tegucigalpa, October 3, 1792 – San José de Costa Rica, September 15, 1842) was a Honduran military and politician who ruled the Federal Republic of Central America during the turbulent period of 1830 to 1839. He rose to fame after his victory at the Battle of La Trinidad, on November 11, 1827. Since then, and until his defeat in Guatemala in 1840, Morazán dominated the political and military scene of Central America.

In the political sphere, Francisco Morazán was recognized by the members of his party as a great thinker and visionary, according to liberal writers such as Federico Hernández de León Lorenzo Montufar and Ramón Rosa, who said that Morazán tried to transform Central America into a large and progressive nation; while Conservative writers such as Manuel Coronado Aguilar accuse him of trying to impose himself for personal reasons; finally, socialist writers such as Severo Martínez Peláez suggest that the liberals led by Morazán were the Creole landowners who had been exploited by the Guatemalan Creoles and the regular clergy during the colony and, with Morazán at the helm, they intended to take the power of the region for themselves.

The government of Morazán as president of the Federal Republic promulgated the liberal reforms, which were aimed at taking power away from the main members of the Conservative Party: the Creoles residing in the Nueva Guatemala de la Asuncion and the Catholic Church. These reforms included: education, freedom of the press and religion among others. He also limited the power of the clergy of the Catholic Church with the abolition of tithing by the government and promulgated the separation of the State and the Church.

With these reforms, Morazán won powerful enemies, and his period of government was marked by bitter internal struggles between liberals and conservatives. However, through his military capacity, Morazán remained firm in power until 1837, when the Federal Republic broke down irrevocably. This was exploited by the regular orders of the Church and the conservative Guatemalan leaders, who joined under the leadership of Guatemalan general Rafael Carrera, and, in order not to allow the liberal Creoles to take away their privileges, they eventually divided Central America into five states. 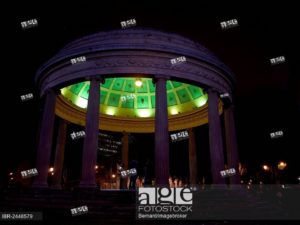 The Morazán Park Music Temple is an almost replica of the Temple of Love and Music located in the Palace of Versailles, France. It was built by the architect and painter José Francisco Salazar to replace the wooden kiosk located in the same place, for its construction mainly concrete and reinforced steel were used.

In 2010 it had to be restored due to the damage suffered by pigeons that used it as a nest and also by the pollution caused by cars. Opened on December 24, 1920, in the middle of the election of the beauty queen of the popular celebrations of San José. During its first decade of existence, the Temple of Music hosted festivals and musical shows with which the Josefina population said goodbye every December 31, until these celebrations moved to the González Víquez Square.

Apart from hosting a huge amount of musical performances throughout its long history, the building has played a very prominent role in the public life of this country and many leaders have used it as a stage for some of their main political rallies, concerts of the National Symphony and other orchestras, and even acts of transfer of political power. Nowadays it is also the site of multiple cultural activities, such as the International Arts Festival, the Transitarte or the Fall in love with your city program. It was declared Architectural Heritage in 1975 by the Ministry of Culture.

In addition to the Temple of Music, Morazán Park has other monuments: Effigy of Francisco Morazán: head carved in bronze by Costa Rican Fernando Calvo; placed on a pedestal of martyring cement, it is 35 cm high; It was installed after the remodeling of the park in 1993. Monument to the Liberator of America Simón Bolívar: one of the four copies of the statue designed by the Italian sculptor Pietro Teheraní (the others are in Bogotá, Caracas, and Hamburg); approximately 1.7 m high, it rises on a limestone pedestal and each side has white marble slabs with legends alluding to Bolívar, it was presented to Costa
Rica by the Venezuelan Colonel Ernesto Pérez Luna and opened on September 15, 1931, on the north side of the park and removed from its original site at least twice.

Bust of Mauro Fernández Acuña, Benemérito (exemplary citizen) de la Patria (of the fatherland): 73 cm high bronze bust, the work of the Costa Rican sculptor Juan Portugués Fucsina, was cast in the Workshops of the Pacific Railroad by Juan Hárbatele Rojas and inaugurated on December 19, 1943. Bust to the Liberator of Chile Bernardo O’Higgins: bronze on cement pedestal, is approximately 70 cm high and is the work of Costa Rican sculptor Luis Umaña Ruiz.

Plaque-monument to combatants and those killed in the Coto4 war and the Treaty of Limits between Costa Rica and Panama Calderón Guardia-Arias Madrid. Bust of former Argentine President Domingo Faustino Sarmiento: dated in 1938 and placed in the park in the 1950s, this bronze sculpture about 75 cm high is the work of Argentine Luis Perlotti.

Monument to former Costa Rican president Julio Acosta García: work of the Italian sculptor Leones Tommasi, the ruler appears seated; The statue is 1.5 m high and has two allegorical bas-reliefs of 95×1, 30 cm that are related to justice, wisdom, protection, and peace. The pedestal (3.6 m wide by 2.5 m high) is made of Roman travertine marble plates. Dated in 1962, it was inaugurated on December 14 of the following year. Monument to former Costa Rican President Daniel Oduber Quiroz: located on the northeast side of the park, the bronze, 3.5 m high, was sculpted by Olger Villegas Cruz on a marble and stone pedestal; At the foot of the statue, there are three plaques with phrases from the president.