It symbolizes the diversity and beauty of our natural ecosystems.

The purple orchid is popularly known as the purple guaria whose scientific name is Cattleya Skineri flowers in the months of February and March. 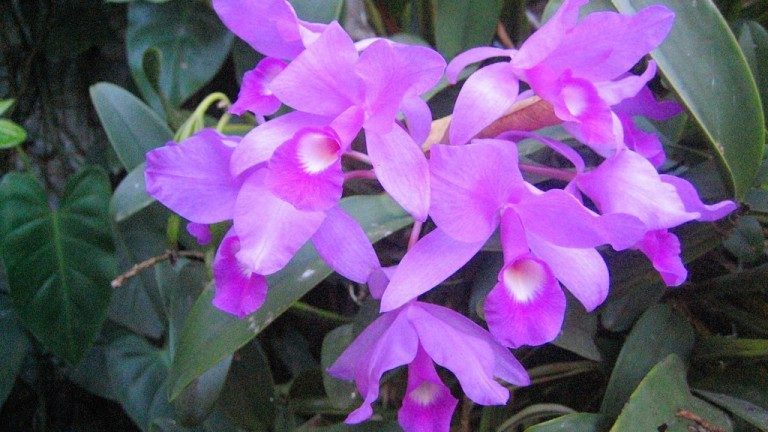 The Guarianthe (formerly Cattleya) skinneri is the most cultivated orchid in Costa Rica. The name was given to him in England, by the botanist James Bateman to honor his discoverer, Mr. George Ure Skinner, who was an English merchant based in Guatemala, who sent plants from Central and South Mexico to Europe.

However, it was in Guatemala the first place where Skinner discovered her. Despite being distributed throughout Central America and even in Colombia and Venezuela, it is in Guatemala and Costa Rica where it is most abundant, it is appreciated and cultivated mostly. In Guatemala, it is popularly known as the flower of Candelaria or Flor de San Sebastián, since the beginning of its flowering coincides with these two religious festivities, and is used as an ornament for the churches and processions.

The root GUA is not European, nor Asian, nor African, it is a surname of clean American extraction, which runs in the sap of the Andean jungle, in many native languages. The root GUAITIL means tree and was transformed into the GUA radical, and that is related to the characteristics of orchids to grow on trees, that is, as epiphytes.

The guaria Morada was decreed as a national flower in the government of León Cortés Castro by the Secretary of State in the Office of Development and Agriculture, by agreement No. 24 of June 15, 1939. Subsequently, through executive agreement No. 24, November 1972, under the presidency of José Figueres Ferrer, the second week of March is established as the week of the Costa Rican Orchid. In 1934, a song dedicated to this flower was composed, which is currently in one of the national anthems of Costa Rica.

In 1939, in Argentina, a botanical garden was founded, called the Garden of Peace and they asked the Costa Rican State to send their national flower so that it would shine with the other flowers of the different countries. Because at that time, the country did not have a national flower, the Garden Club and the Rotary Club held a contest to choose the one that would represent the country from then on. In the contest, very Costa Rican characteristics would be valued, such as the one that was originally from America and was very incorporated and rooted in national customs. The winner turned out to be an orchid popularly known as guaria morada.

La Guaria Morada is also the National Flower of Costa Rica because it is the mystic flower of faith, which was inherited from the elders. It is the favorite flower of Lent, the heraldic flower of the Holy Week; not only is it intimately linked to the traditions of the country, but it is one of the national symbols. Therefore it must be estimated and protected, so that future generations can also enjoy the spectacular beauty of its flowers.

As a way to highlight this national symbol of great beauty, its image was integrated into the design of an old five-colón ticket, considered one of the most beautiful that has been issued.

Currently, there is an annual orchid exhibition in Alajuela Costa Rica, usually in October. The orchid exhibition in Costa Rica, a fabulous anticipated event for flower lovers. The show is not only a great place to learn about this beautiful plant, but it also creates awareness about endangered plant species and efforts to protect them such as Cattleya dowiana (Guaria Turrialba), elata Peristeria (Holy Spirit) Psychopsis Krameriana (Mariposa), Trichopilia suavis and Guarianthe skinneri (Guaria Morada – National flower of Costa Rica). The event is carried out by the Alajuela Orchid Association.

The abundant flowering extends between February and March. It is called “purple” in reference to the reddish purple color of its flowers, similar to one of the blackberries, small berries of the thorny plants of the genus Rubus.

Its flowering in this season, the color of its flowers and the appreciation that the people have, makes them use it for the decoration of altars during Lent for the “Huerto” and the Holy Sepulcher during the Semana Mayor.

There is great variety in the coloration of the flowers, from the purple ones to the albas, the hidden albas (white with a purple spot in the throat of the lip) and the pink ones.

It is called “purple” in reference to the purple color of its flowers, which are similar to blackberries, it has large flowers and broad petals, it has a leaf that leaves the apex of the pseudobulb. Its flowering extends between January and March and measures about 50 cm high.

It is the flower that is mostly cultivated in Costa Rica, although it is distributed throughout all the countries of Central America, and in Colombia and Venezuela (where it is known as Candelaria or San Sebastián flower)

It is used as an ornament for churches and processions.

It lives in the peaceful zone of the country, and in the pre-mountainous zones of 500 to 1000 meters. It is an epiphyte of certain temperate earth trees. Its ecological distribution is as follows:

Traditionally, the grandparents cultivated the “guaria morada” in the walls of the internal courtyards and the roofs of many old houses, in the gardens or in the lots of their houses, but it was classic to see them on the outside, in the adobe walls. or bahareque, on clay tiles, as the song by Aníbal Reni and the Talolingas says.

This type of cultivation was very common in traditional cities such as Cartago, Escazú, Santo Domingo de Heredia or Barva, but the telluric movements, such as that of 1810 and the “renovators” architectural movements, ended this pleasant habit. Also, it was possible to appreciate them in the trees of the parks or in the canyons of the rivers Virilla, Grande or Tárcoles.

Overexploitation for profit by unscrupulous “materos”, made them disappear from these sites. In their natural habitat, they can only currently be seen on private farms in Acosta, Miramar, Miravalles or Nicoya.

In addition, some Palmares gardens, such as Cocaleca, or Naranjo, because of the number of plants they have, constitute a sort of conservationist sanctuary for the most prized guaria.

is a typical song of Costa Rica, whose lyrics and music are the work of national composers Roberto Gutiérrez Vargas, Carlos López Castro and Aníbal Reni (a pseudonym used by Eulogio Rojas Ramírez). Written in 1934, it is considered one of the main anthems of this country, given that, as its name indicates, it is dedicated to the guaria morada, which is the national flower of Costa Rica. Along with the song Caña dulce, it is considered one of the most representative melodies of Costa Rican folk music from the Central Region of the country, also called “village music”.

The rhythm of Guaria morada is the so-called national air, rhythm very measured, with distant reminiscences of the waltz, but much slower. Precisely the music of Guaria morada is considered the most representative example of this musical rhythm. It has been recorded and performed by multiple national artists.

Traditionally in Costa Rica in the late nineteenth and early twentieth centuries, purple huts were usually grown on the walls of the inner courtyards and the roofs of many old houses, in the gardens or on the lots of houses, but it was classic to see them in the external part, in the walls of adobe, or bahareque, and on clay tiles.

On the covered wall

Flower of this blessed land.

Hanging in the bower

when in the dark the goldfinch

It is entangling your tune.

where are the cold mountains

And there are the icy waters.

the mourning of your clothes,

It is the same as my grief.

and the poppies bleed,

The love of your corollas.

of the pampa and the hill,

as you are spring,

On the entertaining wall,

in the rock and the stream

She is an emblem and is a gala

that embellishes and glorifies,