Costa Rica has several particular regions that are ideal for bird watching. For example, the Osa Peninsula where the “Lapa Roja” is found as a common resident. San Gerardo de Dota is a magnificent region for bird watching and includes the “Quetzal”. In the northern area is the reserve of Caño Negro. Also near San José de Turrialba, there are many beautiful species. Regardless of where you want to go make sure to look up into the trees and also the sky. Maybe you will find the species you were looking for.

The birds in our country present a high biological diversity within the fauna, as a result of their location and biological origin. The diversity of birds’ species is divided into four ornithological provinces, highlands, slopes of the Caribbean, North Pacific and South Pacific. 920 bird species of the country are identified, of which 56 are endemic. The enormous range of colors in their plumages, as well as their innumerable and incredible bird sounds, are admired by both foreign and national tourists. They abound in national parks and wilderness areas.

Birds occupy all the possible niches, from birds of prey both land and sea and scavengers, also those that feed on insects, fruits, seeds, nectar, larvae and eggs, presenting diurnal and nocturnal habits, thriving on coasts, mountains and plains, in forests, mangroves, wetlands and open areas, for which they present adaptations in structures such as beaks, legs, claws and color and plumage pattern, as well as in variety from solitary or gregarious behavior.

Tips and tricks of bird watching. 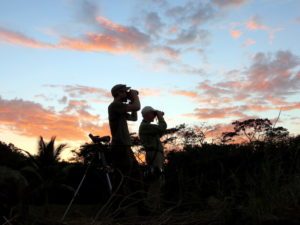 With so many species it can be difficult to keep track. Here are some recommendations.

Binoculars. Be sure to buy a good pair.

Field Guide. After having many photos, use your guide and document each one.

Keep a Record. Use a notebook or one of the new applications to record all your photos and the name of each bird.

Nature Guides. Do not underestimate the tour guide’s abilities, as they know all the best areas to spot these wonderful flying friends.

Your Ear. Know the specific calls for each bird species. Since it is more than likely that you listen to them before you see them.

Applications. There are a lot of bird-watcher applications out there and some are extremely detailed with sounds and impressive descriptions.

Just Go out, explore and have fun is what bird-watching is all about.

Most common bird species in the country.

Hawks. They feed exclusively on carrion. They locate the corpses with their sharp vision and sense of smell, flying at a sufficiently low height to detect the gases produced by the beginning of the decomposition process of dead animals. To move in the air, they take advantage of thermal air currents reducing the need to flap.

Quetzal. Possibly the most recognized bird in Costa Rica. The resplendent Quetzal is beautiful; its body plumage is iridescent green, with reflections ranging from gold to violet-blue, with an intense crimson red chest and belly.

Iris Peak Toucan. It is one of the many species of toucan found in the jungles, of black plumage contrasted with the intense yellow and part of the chest; it has a large peak 16 cm long.

Scarlet macaw. It is a large and colorful bird; it belongs to the family of parrots. Measuring between 81 and 120 cm long and weighing about 1 kg as an adult specimen. They live in lowland rainforests, on flatlands at sea level and up to a thousand meters high; it occupies the high and medium evergreen jungles and near large rivers and streams.

White-crowned hummingbird. It is a very small bird, only 6 centimeters long and barely weighing 2.5 grams. However with an incredible wing speed.

“Copetona” eagle. One of the birds of prey of Costa Rica. It is found in the rainforest and feeds on smaller reptilian birds and even monkeys.

Emerald toucan. Found in mountainous regions, the emerald toucan is bright, marked and has a long beak.

Parakeet. Its plumage is green with variations of bright green tones on the head passing through a yellowish-green hue in the abdomen area and a dark green on the wings. On the forehead or crown, it has an area of red feathers. It measures approximately 28cm.

Many of these birds are beautiful for their vibrant colors and are a unique gift when you visit Costa Rica.

Corcovado National Park: One of the Few Natural Areas That Remain Virgin in Central America