When we mention the great variety of birds that live in Costa Rica, we can only think about all the colors. Truly a paradise for bird watchers, Costa Rica is also a great place for anyone who appreciates the beauty of nature.

The birds of Costa Rica represent a high biological diversity within the fauna of this country, as a result of its location and geological origin. Bird diversity is divided into four ornithological provinces: Highlands, Caribbean Slope, North Pacific, and South Pacific. As of 2018, 930 bird species have been identified here, of which 56 are endemic.

Here are some of the bird species that abound in our national parks and wilderness areas.

The Eagle. One of the largest birds of prey in the world is the tropical eagles, one of the most powerful, is the Harpy eagle, which weighs about 4.8 kilograms. It lives in the lowlands of the virgin jungles from the south of Mexico to the north of Argentina. Due to the constant loss of its habitat, it has become an endangered species.

It feeds mostly on arboreal mammals such as monkeys, sloths, and opossums. The dorsal part is black and the ventral white and has a black band on the chest. Its pale gray head sports a double crest that when it is erect gives this eagle a certain resemblance to an owl. The Eurasian equivalent to this eagle is the monkey-eating eagle, which has a similar weight. It is the national bird of the Philippines, although it is now restricted to a few mountainous areas on the larger islands.

Other outstanding species of Latin America are the black crested eagle, which is located from southern Mexico to northern Argentina, as well as the striped crested eagle and the
the white crested eagle that lives from Honduras to the south of Brazil, as well as to Peru and Paraguay, while the crowned eagle is found in Chile, Argentina, Southern Brazil, Uruguay, Paraguay, and Bolivia.

The American Stork. It is a large bird of 102 cm., that frequents the freshwater and salt lagoons feeding on small fish. They are found in the Central Pacific, Guanacaste and Caño Negro. 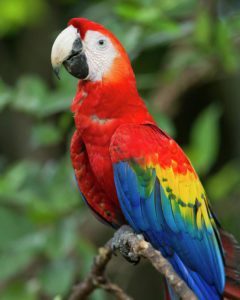 New World Parrots. Also called Macaw, the common name of the members of a group of long-tailed and strong-billed birds, belonging to the parrot family, who live in the American tropics. There are 17 species today; Several species from the Antilles and the Bahamas are now extinct. The size of the macaws is very variable. The Araya Jacinto of Brazil and Bolivia, which measure one meter, are the largest parrots in the world. Its length is more than three times that of the lesser of the macaws, at 30 cm.

Native to Central and Northeastern South America. Several of their species are threatened, especially the Spin macaw, which once lived in the interior of Brazil but is now partially or totally extinct as a wild bird.  The species that we usually find in the aviary are the blue macaw and the red macaw.

The Hummingbird. It is the common name of more than 300 species that make up a family of small, prosperous birds of the American continent. They share several anatomical characteristics that make them swift moving. This family contains the smallest of all birds; many species are less than 8 cm long The smallest species is the bee hummingbird of Cuba at just 5 cm in length and weighing only 1.95 grams.

Despite their diminutive size, they are fiercely territorial. Hummingbirds are known for their rapid flight; Its powerful wings are so fast that they produce a buzz. They feed on nectar and small insects that they find inside flowers and they hover in the air in front of them while they introduce their long and extensible tongue. To get away from the flowers the hummingbirds have to fly backward; they are the only birds capable of carrying out this maneuver. 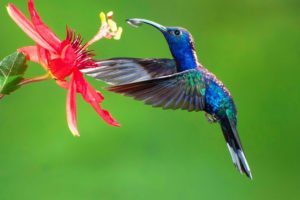 The slender beaks of hummingbirds vary in size and curvature depending on the size and shape of the favorite flower of each species. Most hummingbirds exhibit bright colors and iridescent green, usually metallic. Its throat is, in general, bright red, emerald green blue, although only in males. In a group of hummingbirds, the hermits, the plumage is fundamentally brown, without iridescence. This group also differs from other hummingbirds in that it builds long hanging nests, in many cases subject to huge leaves. Most hummingbirds build small cup-shaped nests, covered with lichens, spider webs, and bark chips, on a tree branch. They lay two white eggs, which only the female incubates. Hummingbirds inhabit the entire length of the American continent, from Tierra del Fuego, on the southern tip of South America, to almost the Arctic Circle, but most species live in tropical South America.

The Dove (Pigeons). Members of this family of birds, have an almost worldwide distribution and are very abundant in warm regions. They have a small head, a short neck, a sturdy body with short legs and smooth, shiny plumage; They also have a fleshy or cerulean protrusion, called a wax, at the base of the beak. They live in the trees or on the ground and feed on seeds, fruit, acorns and other nuts and insects.

Pigeons have a fast flight and are known for the sound of their lullaby. They build loose nests and little hatches, almost flat, with twigs, bark, straw, and weeds; the female lays one or two white or tan eggs. The best-known species is the wood pigeon, whose wild ancestor, originally from Europe and Asia, is the so-called wild pigeon. It measures about 33 cm, is bluish gray on the back, with black markings on the wings and the whitish rump, has a purple chest and bluish abdomen. The sides of the neck, especially in the males, are
iridescent

The more than 200 domestic breeds of variable coloration, derived from the wood pigeon. Carrier pigeons, which are also of variable color, are bred for their navigational skills, not for the characteristics of their plumage. Among the other domestic breeds are others pigeons often confused with the carrier pigeons, which is characterized by large carnosities around the eyes and the base of the beak; and curls, formed by the forward curvature of the tips of the neck and body feathers, giving this bird a characteristic appearance. The white-crowned pigeon is a species of the Caribbean, extending northward and reaching south Florida.

The Yiguirro (Turdus gruyere). It is one of the best known because, apart from its abundance, it is very notable for its singing at the beginning of the rainy season and has been chosen as the National Bird of Costa Rica. There are other species that could also have opted for that title, but finally, the yigüirro corresponded that honor. The reasons that motivated the declaration of yigüirro as National Bird, is based on how familiar this bird has been to Costa Ricans for a long time, precisely because it lives very close to houses and its name is often mentioned in typical songs.

Its famous singing has always been related, by farmers, with the arrival of the rainy season for the good of their crops, and also some affinity between the bird with its modest plumage singing and jumping near the orchards, with the farmers equally humble clothing and behavior.

The yigüirro can measure approximately between 22 and 24 cm. Both sexes have identical plumage, yellowish brown, a little lighter in the throat and belly. The iris is reddish brown, the bill yellowish and the legs are brownish. The juveniles have black spots on the chest and beige spots on the wings, in addition, the color of their iris is browner than in adult individuals. Some people confuse them with the female of the Zanate, which really is very different for having a longer tail, larger size, a longer beak and for walking (the yigüirro goes about in small jumps).