America is one of the continents that have the most animal species due to its geological history and the geographical position that characterizes it since millions of years ago when the Pangea harbored all the continents linked together.

Immense numbers of species flourished in such a vast land mass, many of these animals growing and evolving in America after the separation of this ancient super-continent. One of the most mega-diverse American countries of this vast territory in Costa Rica, this country hosts more than 500,000 species of animals, of which, unfortunately, part of them is listed as threatened with extinction.

As it is whimsical in topography it is in natural beauty, Costa Rica contains both tropical and subtropical climates with a great variety of pristine landscapes. With the wealth of the country’s natural resources, it can boast an amazing variety of wild and exotic species of wildlife.

Below are listed, some of the animals in danger of extinction in Costa Rica, and the main characteristics of each of them:

The Soterrey Sabanero or also known by its scientific name as Cistothorus platensis is one of the endangered birds of Costa Rica and is often known by a multitude of names depending on the area where it inhabits such as the sabanero wren, paramuno wren, Salta pared sabanero, chercán de las vegas, among others. This bird, belonging to the Troglodytidae family, lives in swamps and savannahs although it prefers open areas,
and being able to get up to heights of 3000 meters above sea level.

This small bird measures a maximum of 11 centimeters in length; its body is covered with feathers of black, white and brown colors that form asymmetric lines. Its food is basically focused on the consumption of insects of various types. Among the main threats to which this bird is subjected is the destruction of its habitat and the loss of appropriate weather conditions to live due to factors triggered by global warming.

The leatherback turtle is an endangered sea turtle that inhabits mainly the American continent between the Caribbean Sea and also the Pacific Ocean, although it has been encountered in Japan, Australia, the Mediterranean, among other places in the world. Its scientific name is Dermochelys Coriacea and belongs to the Dermochelyidae family.

This reptile is one of the animals threatened with extinction in Costa Rica. Even though it is a turtle, it does not have a hard shell on its body, rather it is protected by a kind of smooth cover approximately 2 meters long and 90 centimeters wide, which fulfills the functions of the shell, but with the difference that it is soft to the touch with a semi-cylindrical shape. The females tend to be larger, than the males, both being dark colored, between black and brown tones, with some spots of lighter shades such as pink, white or gray. They have an omnivorous diet, having among their favorite foods sea urchins, jellyfish, fish, algae, and mollusks, among others.

The main threats that put the leatherback turtle in danger of extinction have to do with human activities on the environment that seriously affect their ecosystem. Plastics poured on the waters where this turtle inhabits end the lives of hundreds of these reptiles every year; also the poaching and the robbing of the eggs of their nests is regrettably constant so that the UICN catalogs list this turtle, one of the reptiles in critical danger of extinction in Costa Rica.

The Congo or Howler monkey, as it is commonly known or by its scientific name the Alouatta Palliataes and belonging to the family of the Atelidae is one of the endangered mammals of Costa Rica. Its habitat extends into mangrove areas and swamps throughout Latin America, preferring forests of large tree species, where it lives on the heights of its leafy branches.

In Costa Rica, it specifically inhabits tropical forests that are at maximum heights at 2,500 meters above sea level. This primate is characterized by being clearly herbivorous, its diet focuses on the consumption of fresh and young leaves, fruits and flowers; preferring green leaves and avoiding the dry ones since the latter contain a low nutritional value and do not provide the energy it needs for day to day activities.

The howling monkey owes its name to the powerful sounds it emits, howling to communicate with other members of its species; its howls are heard up to almost 5 kilometers away and emitted to communicate its domination of a specific territory where it is located to other male competitors. These primates are also characterized by having a long and thick coat, which can vary between red, black or brown, showing yellowish tones in some parts of its body. Its weight ranges between 3.5 kilograms and 7.6 kilograms, reaching sexual maturity at approximately 4 years.

The main threats for the Congo monkey in danger of extinction in Costa Rica lie in the destruction of its habitat since logging and deforestation are quickly ending with the leafy trees that serve as shelter. In addition, the meat of the howler monkey is used, sometimes, for human consumption, the reason why they are usually persecuted and hunted. This mammal is in the category of moderate concern, according to the IUCN list.

It is another bird in danger of extinction in Costa Rica, whose unique beauty has catapulted it to be named one of the most beautiful birds in the Caribbean. Its scientific name is Ara ambiguous, also known as the green macaw, greater green macaw or military macaw. This bird, belonging to the Psittacidae family, inhabits the lowlands of Central America, although a small group of them lives in the northern part of western South America.

These birds full of color have a dense plumage with colors like turquoise blue, yellow, scarlet red, green, light blue and orange converge. They weigh about a kilo and a half and measure between 85 and 90 centimeters in length. They are very long-lived birds up to 60 years old! They feed mainly on fruit trees, mainly of the almond tree, as well as the sacoglottis and other trees.

This beautiful bird is inscribed on the IUCN red list, being listed as one of the birds at a critical risk of extinction in Costa Rica. Among its main threats are the destruction of its habitat due to the indiscriminate lumbering that has ended the fruit trees where it lives and from which it feeds. Also, its capture to be sold as a domestic pet.

This animal is also known as “Manatee”, belongs to the Trichechidae family, having a scientific name Trichechus manatus. Usually lives in both salt and fresh waters, usually found in shallow waters of abundant vegetation in both tropical and subtropical areas. Its condition as a mammalian herbivorous makes it prefer waters full of aquatic plants since these constitute their only sustenance to be able to feed themselves. 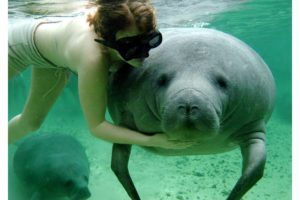 The body is quite large, resembling, slightly, the figure of a mermaid due to the tail it has to propel itself in the water and swim; they can weigh up to 600 kilograms and measure between 3.5 and 5 meters in length. The color of these animals is grayis, characterized by having a coarse, hard and quite thick skin, which is covered with algae and small crustaceans such as barnacles.

Among the threats that put the manatee at risk of extinction is, mainly, the poaching and indiscriminate hunting to take advantage of its meat. This animal is on the IUCN red list, swelling the list of critically endangered animals in Costa Rica.

The wildlife sanctuaries at the National Wildlife Refuge in Ostional, the Corcovado National Park and the Wildlife Reserve of Barra del Colorado protect some of the vital nesting beaches of sea turtles in Costa Rica. Other parks offer critical habitats for the different endangered species in Costa Rica, as for the Jaguars and tapirs of the Manuel Antonio National Park, the Monteverde Rainforest and the Tortuguero National Park, while the wildlife sanctuaries in The Monteverde rainforest, the Carrara National Park and the Curu wildlife reserve are home to a large number of mammal and bird species. The rare species found in these reserves include the fascinating scarlet macaws, pumas, ocelots, coyotes, anteaters, otters, a collared peccary, and tiger cats.