We are in the month in which “World Oceans Day” is commemorated and it is worth noting that Costa Rica is happy to be surrounded by the splendid deep blue, full of authentic biodiversity. 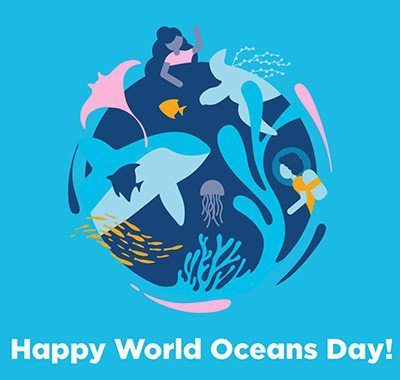 It should be noted that the natural beauties of Costa Rica are recognized worldwide and it is 92% constituted by marine territory, of which 2.7% corresponds to marine protected areas, and this is why it is essential to reverse the deterioration of the oceans “health” with concrete solutions.

On December 5, 2008, the General Assembly of the United Nations, at the initiative of Canada, approved Resolution 63/1111 that establishes every June 8 as World Oceans Day; In the perspective of the United Nations, this day is celebrated to remind everyone of the great role that the oceans play in our lives. After all, they are considered as the lungs of our planet, generating most of the oxygen we breathe.

It is an opportunity to raise awareness among the public about the consequences of activities carried out in the oceans and to launch a worldwide movement in favor of its well-being with regards to human activities like fishing, migration, as well as the creation and policy implementation.

Our Country has to the east, the Atlantic Ocean and to the west the Pacific Ocean, giving us unique tropical characteristics according to experts, that is the reason why there are variations of climate and incredible landscapes within the country.

There are two great gulfs, and many coves (Narrow sea entrances into the land that form bays where boats can anchor to shelter from the wind and storms); two large ports are located in the Pacific: The Port of Puntarenas and Puerto Caldera. In the Caribbean Sea, there is a natural harbor located specifically in Moín, (Limón area).

Marine Diversity – Nutrients for the species.

From “The Costa Rica News”, we always have reported so much information about the natural wonders of Costa Rica, including the “Thermal Dome”, whose presence was detected off the our coasts in 1948 (71 years ago), through “bathythermographs” (instrument consisting of a thermometer that allows to measure and graphically represent the temperature of the sea water at different depths), located on ships that traveled from California to Panama. Due to the dome shape generated by the thermocline (the imaginary line that separates two water masses of different temperature) when approaching the surface and the location towards Costa Rica, Cromwell (1958) baptized the oceanographic site as the “Costa Rica Thermal Dome”.

The nutrients produced in the Dome are suitable for feeding dolphins and mammals such as blue whales, which migrate from the coasts of California. The enormous amount of cold water combined with sunlight strengthens the growth of algae which helps the feeding of zooplankton made up of larger larvae and sea animals, such as a sponge, worms, echinoderms, mollusks or crustaceans, and other aquatic arthropods. Without a doubt, the Thermal Dome is an interesting place, which is also located within one of the largest tuna fishing areas in the world. To protect is to love, your contribution has value.

Previously, we made an article in TCRN, where we asked ourselves if it was a current challenge of our society to protect the Thermal Dome, in that sense, the “MarViva Foundation” presented at the Foreign Affairs Ministry of Panama, to representatives of the Ministry of Environment, the Aquatic Resources Authority of Panama, the Maritime Authority of Panama and diplomatic representatives of the Republic of Costa Rica, the initiative to promote a marine spatial order and joint governance for the protection of the Thermal Dome.

Everything coincides; we must protect and educate to be more aware of the oceans and all its biodiversity, which give us in return, in one way or another, nourishment and gratitude. We are part of the solution and the responsibility for its care if we do not do it, then who will do it? Not only because June is the month in which we highlight our oceans, the commitment must always only be in this month, but rather year around.

With regards to this celebration, we share with you a video that NatGeo made in conjunction with the University of Costa Rica and Osa Conservation, where they show authentic images of the Osa Peninsula waters.

The Osa Peninsula of Costa Rica is located on the southwest coast of the Pacific Ocean, bounded by Coronado Bay to the north and Golfo Dulce to the south. It is worth mentioning that it is administratively located in the south of the province of Puntarenas.