For hundreds of years, torrential weather has shaped Costa Rica’s valleys and canyons, creating a landscape whose twists, dips, and bumps are ripe for rafting opportunities. Some of the country’s most well known rivers – including the Reventazon, Pacuare and Corobici – carve through dense forests and meander along inspiring waterfalls. Rafting options exist for all ages and abilities, and can range from maneuvering through technical rapids to gliding along smooth stretches that are ideal for nature watching. Professional guides attend the adventures and ensure that all experiences are safe, fun and memorable.

The Reventazón (reh vehn tah SOHN) gathers its waters from the rugged core of the Cordillera de Talamanca. Some of the upper tributaries drain the wettest parts of the country. he Reventazón river, nearly 150 km long, gathers its waters from the core of the Cordillera de Talamanca (Talamanca mountain range) and flows into the Caribbean sea, draining some of the wettest areas in the country.

Rising in the Meseta Central (central high plains) the Reventazón, the 3rd longest river in the country, flows through the Orosi, Reventazón and Turrialba valleys. After reaching the Caribbean coastal plains it joins the Parismina River and becomes what is called the Reventazón-Parismina basin. In its upper segments, the Reventazón River is the source of approximately 25% of the drinking water of Costa Rica’s largest metropolitan area centred around San José city. The river is essential to the country’s power generation. Its two reservoirs: Cachí (~100 MW) built in 1966, and Angostura (~172 MW) that went online in 2002, are used for generating a substantial share of Costa Ricas electricity. Almost 80% of

the country’s energy needs are supplied by hydroelectricity.

For whitewater rafters, the Revantazón is one of Costa Rica’s most exciting rivers. By the time Reventazón waters have gathered enough volume to float a boat but have lost enough gradient so as not to smash it, the river is still at an elevation of almost 1450 m. Whitewater can be found on the Reventazón all the way to Siquirres, at an elevation of 45 m.

Several tour operators located in San José and Cartago (in the city of Turrialba) offer rafting trips down the popular Pacuare and Reventazón rivers. The drive from San José city briefly takes you through the breathtaking Braulio Carrillo National Park: past rainforests and waterfalls, across the Continental Divide to the Caribbean side of Costa Rica.

During the green season (rainy season), from June through October, the river is particularly wild as the water levels are high. The drier months from November to April provide the best runs for rafters of all skill levels. The entire reach of runnable whitewater is around 100 km long. There are many points of access along the Reventazón river allowing enthusiastic paddlers to choose from a wide variety of one or two-day trips for some adrenaline filled adventures.

There are two main sections in the Reventazón commonly used for rafting: the Florida section and the Pascua section. The Florida features 15 km of class III rapids with breathtaking views of the Reventazón Valley and its wild life.

Pascua has class IV and V rapids and is recommended for more experienced rafters. It is usually a 4 hour run over 24 km of huge waves going through rapids called “Dirty Mind”, “The Abyss”, “Indigestion” and “Horrendito” (literally: little horrible.) The trip’s stunning landscapes include the fumarole spewing Turrialba volcano that rises 3234 m above the sea level.

The Pacuare is the quintessential tropical river. Along its course lie several densely vegetated gorges which shelter jaguars, ocelots, monkeys, sloths, and an incredible variety of birds. Also found within these gorges is some of the best 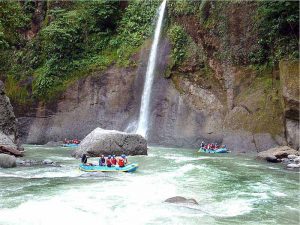 whitewater in all of Central America, ranging up to Class V in difficulty. The Pacuare is the only river in Costa Rica which contains these amenities, including virgin rain forest, while also being quite accessible. The lowland tropical forest here is remarkable for its luxuriant variety and the amazing abundance and diversity of wildlife found within it. Other rivers such as the Telire and the Chirripó Atlántico can match the attractions of the Pacuare but require either a multi-day carry-in or the services of a helicopter.

It is not difficult to paddle the entire lower Pacuare in a day, but overnight trips are much more relaxed. With a two-day trip it is possible to hike up two or three side canyons; a three day trip allows time to explore the jungle by way of the numerous trails that have been used by the local Indians and Campesinos for years. The low beaches are not good places to camp because the river often rises dramatically at night. Most of the prime camping spots above the inner gorge are privately owned. There is a privately owned campground that caters to private groups at the cable crossing approximately 3 miles (5 km) below Tres Equis.

One of the most memorable aspects of the Pacuare trip has always been the put-in. For several years, one outfitter used the original river access plan, wherein local campesinos shuttle rafts, kayaks, equipment, and food down a dirt path on an oxcart. The road to the river is was wiped out by a flood, so the oxcart method of transport was been abandoned. Although the old road/trail through San Mart´n has recently been upgraded and improved, most trips now begin at a drive-in access point two miles downstream.

From the put-in to the beginning of the inner gorge, the river drops through numerous Class II-III boulder gardens and simple drops as it becomes sequestered in the ever more verdant rain forest. Among the more interesting residents of the lowland forest are ocelots and jaguars. The big cats are rarely seen, but somehow you just know that they are 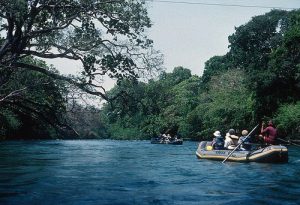 watching you warily from the dark shadows of the enclosing jungle.

Originating in the Guanacaste mountain range in northwestern Costa Rica, the Corcobici River journeys south until reaching the estuary at the north end of the Gulf of Nicoya.

Located right in the hearth of the province of Guanacaste, the Corobici and Tenorio river offers some and moderated waves, this is a wide and fast-flowing class I and II river. This experience is great for all ages, safe enough for children and gentle enough for the elderly to enjoy, just as for nature lovers and bird watchers who will enjoy the lush vegetation of the tropical dry forest.

You we’ll have the chance to observe lots of animals: howler and white faced monkeys; coatis, iguanas and otters; you may also sight some of the 300 species of birds that inhabit the nearby Palo Verde National Park: wood stork, king fishers, roseate spoonbill, boat-billed heron, bare-throated tiger heron, white ibis and many, many more, all can be spotted in the threes along the riverbanks of the Corobici and Tenorio river.