Heralding the Emergence of Human Beings

Famous Costa Rican poet, journalist, writer and politician. In 1887 he was appointed Attaché of the Embassy of Costa Rica in Washington, United States
Read more

The Power of Fruits: They Will Make You Healthy

Without a doubt, fruits are the most attractive food group and they...
Read more

Although breast cancer is much more common in women. Men can have...
Read more
TCRN STAFFhttps://www.TheCostaRicaNews.com
Creating a Conscious alternative news network that we feel the world needs. Pura Vida!

The mountain reservoir is low. Ten or fifteen meters of steep hillside lie exposed, and the light brown soil is pockmarked with stumps from trees cut down over fifty years ago. 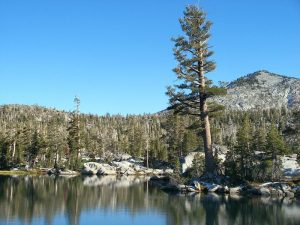 But the bowl is still beautiful, and a stiff breeze blows off the lake, generating countless wavelets that gently lap against the shore. Even in the wind, one feels once again the stupendous stillness of the place. This little man-made mountain lake is a microcosm of the universe, an Arecibo antenna for the silence of the cosmos.

Suddenly the breeze dies down, and the stillness becomes palpable. A woodland hawk soars over the water, its light-colored underwings accented by darker areas that follow the curve of its wings. For a minute the wavelets continue to lap onto the shore. Then they too suddenly stop, and just as they do, the mind falls silent and meditation spontaneously ignites.

The sun streams over the pines on the ridge a mile away, throwing a long brilliant line across the water. A skinny salamander skirts along my outstretched leg, and one sees and feels, as if for the first time, that love is the very essence of nature, being, and energy.

The domination of thought in the brain prevents perception and reception of essence completely beyond words. It’s easy to throw around a word like ‘love,’ but experiencing the actuality requires arduous inner work, attentively awakening stillness of mind. Why is it arduous, if love is in fact in the very nature of the cosmos?

What is it about the human brain that on one hand, gives us the capacity to be aware and directly experience quintessence, but on the other hand blocks us from living in terms it?

It’s easy to project man’s darkness into nature, and to see life simplistically as a struggle of “tooth and claw.” That tired worldview justifies injustice, rationalizes irrationality, and denies the unique brutality and destructiveness of man on this planet.

This isn’t to paint some Rousseauian idyll of a pre-human or pre-agricultural Eden. The predator-prey relationship, without

moral overtones, is the law of nature.

That said, even one of the smartest animals on the planet, the Orca, or “Killer Whale,” does not kill out of maliciousness, or greed, or conflict with other species, but simply to live.

I saw a video recently of a pod of Orcas cooperating with great precision to wash a seal off an ice floe. The floe was big enough to afford temporary protection for the seal, but small enough for the Orcas, working together under the direction of a leader, to generate waves that washed the seal off.

But that wasn’t the most amazing thing. They then allowed the seal to get back onto the ice floe, whereupon they repeated the maneuver. Close observation revealed that older, more experienced Orcas were teaching juveniles the complex, cooperative behavior. During the seal’s first expulsion from the floe, the juveniles just watched. During the second, they participated, and were rewarded with a meal of seal.

The humans at the scene projected conflicting emotions onto the events–sympathy for the seal on one hand, identification with fellow apex hunters on the other. Both orientations prevent direct perception; projection always precludes perception of actuality.

Of course domesticated animals, such as dogs, can and do become vicious if mistreated or trained to be so. And some animals, such as old or impaired lions in the wild, living in proximity to man, have been known to exhibit not only a taste for human flesh, and a seeming vengeance against people encroaching on their territory. In addition, Jane Goodall observed one troop of chimpanzees waging a war of extermination on another in a preserve in Tanzania.

With the possible exception of Orcas and chimps however, who obviously have a rudimentary level of symbolic thought (probably similar to early humans), cruelty does not exist in nature. And even if incipient conflict and planned aggression do exist in other mammals, no rational person would call it evil.

A quantum leap in consciousness occurred in man, based on the capability to remove, remember, and manipulate ‘things’ in the environment. That adaptation gave us the capacity both for awareness of the order, harmony, and love that permeate the universe; it also gives us a predilection for disorder and evil arising from self-centeredness and greed.

To be consciously aware every day of the indivisible intelligence and holiness that suffuses the universe requires another quantum leap in consciousness. Anyone can achieve that, if we really want it, and make fully awakening universal love in ourselves the most important thing in our lives.

Having apparently come to the end of tens of thousands of years of man’s limited consciousness, can the psychological revolution that heralds the emergence of human beings ignite now?

Famous Costa Rican poet, journalist, writer and politician. In 1887 he was appointed Attaché of the Embassy of Costa Rica in Washington, United States
Read more
Health

The Power of Fruits: They Will Make You Healthy

Without a doubt, fruits are the most attractive food group and they add the virtue of being...
Read more
Health

Although breast cancer is much more common in women. Men can have it too. It occurs most...
Read more
Travel

In the Huetar indigenous territory, there is Tabacari, in Spanish "Santuario de las Aguas" (Water sanctuary), a...
Read more
- Advertisement -

Are you tired of cleaning the floor every day? Do you wish there are ways to clean...
Read more

Pilar Cisneros: ‘’ Costa Rica Is a Country Impoverished by Some Inept Politicians. ’’

The experienced journalist Pilar Cisneros sent a strong message to President Carlos Alvarado, on the second day of the blockades in...
Read more

Integration is the Priority for a Better World

Integration as the Surest Path Towards a More Equitable Global Society

The present world is one of great opportunities and challenges. We humans are for the first time in our common history capable of modyfing the course of global society
Read more
- Advertisement -