Presidential Election Drawing Ticos from Near and Far 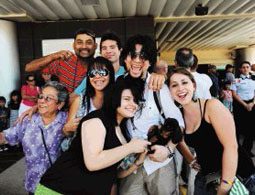 The call of the ballot box has not only drawn Costa Ricans living in the country, but also those residing outside the country.

Ivannia Salazar is one example of a national of that will go to the polls tomorrow.

Salazar lived for four years in Spain and returned to the country last week in order to participate in the elections.

“It seemed important to come not only to participate in the elections, but because it is an opportunity for the National Liberation Party,” said Salazar.

“For this occasion, I agreed to come and I am sure who I will vote for,” said Monge.

Yamileth White is a native of Athens, Alajuela, Costa Rica and will also visit in order to participate in the vote today.

White lives in Virginia, USA, and does not know which of the presidential candidates will get the vote, but said he was very eager to vote.

The TACA airlines dropped the price of tickets by up to 50% to the Costa Ricans who returned home with the intention of participating in the fair election tomorrow.

As reported by the airline, through its press office, the promotion was well received by the Costa Ricans, even though exact figures are unknown how many people took it.

It was also noted that Costa Ricans living in the U.S., Colombia, Mexico and Peru were those that most opted for the offer.

TACA reported that even the ambassadors of Costa Rica benefited from the discount on airline tickets.