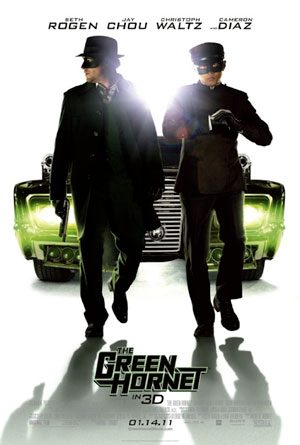 Michel Gondry is without a doubt one of the most inventive working directors. However, his unusually perceptive eye to find humanity in the quirkiest details seems to have taken a holiday when he directed The Green Hornet. This adaptation of the TV show follows the all too familiar plot but never takes it to the places one would expect from a Gondry film and more essentially, from any TV show that gets turned into a movie.

Seth Rogen plays Britt Reid, the slacker heir to Los Angeles newspaper The Daily Sentinel. When his father dies, Britt suddenly finds himself trying to act like a grown up and take over his late father’s business. For this purpose he teams up with his father’s mechanic, Kato (Jay Chou), who not only makes awesome gadgets, but also drinks the only coffee Britt likes. Britt bonds with Kato through their mutual hatred of Mr. Reid and soon they engage in a “bromance,” the likes of which have become more and more common in recent films.

Out of the blue they decide they will become superheroes. Not in the common way, but by making criminals believe they’re actually bad guys and then actually saving the day. For starters this idea makes no sense and is never justified in the movie, so as they engage in their criminal activities to save innocents, we wonder why does the movie feel so wrong when the campy TV show succeeded?

Part of this might be owed to the miscasting of Rogen in the lead role. His comedic talents are an acquired taste and he is never truly able to encompass the sexy, bad boy qualities that Van Williams gave the character in the 60’s. Britt, as played by Rogen, comes across looking like nothing more than a spoiled man-child with absolutely no regards for the consequences of his actions.

It makes sense then that Chou manages to steal every scene he’s in. Kato was always the most interesting character in The Green Hornet series and while Chou is never able to live up to the role that made Bruce Lee famous, he does a satisfying job in maintaining a certain degree of dignity as the movie uses him as a punching bag for racist stereotypes, silly frat boy jokes and demeaning quips.

Christoph Waltz plays the villain and Cameron Diaz is the object of Kato’s and Rogen’s attention. Both actors are merely fillers in a film that couldn’t care less if the characters were being played by sticks.

Perhaps The Green Hornet was never meant to be a masterful film or a transcendental popcorn flick. However, in the wake of the comic book movie movement during the last two decades or so, it’s a shame that this movie fails to elicit anything other than disdain for the genre.

The film could’ve explored the interesting hero-sidekick relations that plague these kinds of films, but are only deal with lightly. In fact, a constant gag throughout the film suggests that Kato feels he’s better than Britt. He is, but that was never the point.

There should’ve been a certain synergy and chemistry between the two of them and the competitiveness should’ve been friendly not annoying. But in all honesty what can you expect from a movie that spends a quarter of its already excessive running time in a set piece that goes against everything the thinly designed characters stand for.

Perhaps the most disappointing element in the film is Gondry’s direction which fails to stimulate the eye or mind. It’s as if he muted his unusual style to the service of the ridiculous screenplay. Knowing Gondry, one could argue that perhaps there was some postmodernist undertone to the whole thing. Maybe just maybe he was trying to critique heterosexual male bonding through violence filtered through racial slurs and homoerotic actions. However, to do this would be to look too hard into a movie that has absolutely no sting.

Mindfulness: Freeing Our Thoughts and Emotions