There are many things that identify the Ticos, such as talking about the Guara ira morada, the Ganas caté tree, our flag or our passion for football. In this article we show the roots and the importance of football in Costa Rica.

Some say that football became so popular in Costa Rica due to the fact that it is a game that can be shared among many and be played almost everywhere. It is difficult to find a locality in Costa Rica, which does not have at least one soccer field. It is usually located next to the other vital institutions of the town, such as the church and grocery store.

Generally speaking, like everywhere else in the world,  men tend to be more passionate about the game than women, but there are a lot of female fans and teams as well. Every time one of Costa Rica’s teams are playing, you can be sure that all the neighborhood bars will be full of “soccer” fans sharing the emotions with their friends. Soccer is an important part of Costa Rica’s culture, it is not just a sport, but a national pride and ethical identity.

The Costa Rican Football Federation tends to consider that the practice of soccer in the country began around 1876, on the grounds of La Sabana. However, the first game referred to was played in 1887, when Oscar Pinto Fernández, returning to the country from England, together with a university colleague organized two teams to play a game with uniforms and a ball brought from England. However, it was not until 1894, with the arrival of English businessmen, that they joined with young Costa Ricans who had studied in England, that the practice of football achieved greater boom and gained some degree of organization.

As a result of the rapid growth in soccer practice, the need to create a centralized body to direct and organize this sport was taken into account. Until then, games were played in the Parque Metropolitano La Sabana, in San José, with great crowd assistance, costing 25 cents  for a spectator chair. However, there was no regulations or statistics recorded, so some leaders found it necessary to organize the activity.

After several failed attempts, a committee was organized to study the organization of football in the country. In this way, the Costa Rican Football Federation is founded on July 13, 1921, under the name of the National Football League and in parallel a Court is created to arbitrate in disputes between clubs. The National Football League was made up of a representative from each of the 7 original clubs: La Libertad, Spanish Gymnastic Society of San José, Club Sport Herediano, Liga Deportiva Aláguenles, Club Sport Cartaginés, Club Sport La Unión de Tres Ríos and the Limonense Gymnastic Society.

Costa Rica’s ProfessionalLeague, is composed of 12 teams, with the team of San José (Supresa) and Alajuela (La Liga) being the most popular. As it happens with any sports team that has a fan base, the rivalry between the teams can be fierce. These 12 teams compete throughout the year in two seasons: a summer season from February to June, and a winter season, from July to December. In addition, Costa Rica has a great national team. This team has qualified for several World Cups, in 1990, 2002, 2006 and 2014.

The Costa Rican national soccer team, loved and supported by their fans and all the country,  known by its nickname, La Sele (which comes from the Spanish word ‘Selection’), has a rich history. The first time it qualified for the World Cup was in 1989, and during the Italian World Cup in 1990, the team was able to qualify up to the round of 16.

The Costa Rican soccer team entered the 2002 World Cup and reached 19th place. Again in 2006, La Sele qualified and played in the World Cup, but unfortunately finished 31 of the 32 teams. 2014 brought one more year that the team qualified for the FIFA World Cup, during the qualifying phase they finished in second place in CONCACAF, making history for this. 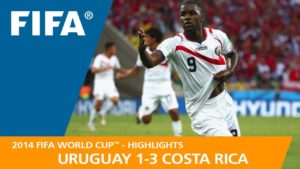 On June 14, 2014, Costa Rica landed in Group D, which faced them to the football giants of Italy, Uruguay, and England. The first game was Uruguay vs Costa Rica. This epic game had everyone jumping out of their seats cheering Costa Rica, the game ended with Uruguay 1 – 3 Costa Rica. Then on June 20 Costa Rica faced Italy, and Costa Rica made history when they won Italy 0 – 1 Costa Rica. The next game against England on June 24 ended with
a draw, 0-0. Costa Rica qualified to play Greece in their next game on June 29, 2014. This hard fought nail bitting game ultimately was decided on penalties. In which Greece won 5 – 3.

Costa Ricans not only watch football, almost everyone plays it or has played too! People of all ages are found playing “mejengas” or unofficial games. These games are taken seriously, and players can be very competitive! Many of the largest institutions and companies in the country sponsor amateur games, for example, the national “Brewery”, Banks and Supermarkets.

If you like football, you can’t miss watching a game at the National Stadium of Costa Rica. Located in Parque La Sabana in downtown San José, which is the first world-class sports stadium that is built in Central America. Financed by the Chinese government, the stadium is huge and can hold more than 35,000 people. It also serves as a place for concerts, as well as other sporting events.

Enjoy this Costa Rican passion for soccer and don’t forget to shout, “Gooooaaaallll !!!!”