Nestled in the tropics and bathed by two oceans, Costa Rica is one of the countries with the greatest ecological diversity on the planet and therefore one of the meccas for ecotourism. Travelers seeking close contact with nature and wildlife, devotees of relaxation, ecologists, hikers, birdwatchers, whitewater rafting enthusiasts, rainforest canopy, lovers of virgin beaches, surfers and volcanoes explorers … they all have a must-see with this nation. 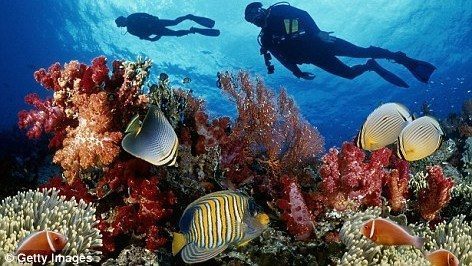 Coral reefs are considered one of the most diverse and complex ecosystems that exist on the planet. These appear in shallow waters, up to a depth of 60 m and are mainly built by scleractinian corals living in symbiosis with microalgae called zoo antelas, located in clear waters, where they perform photosynthesis, and the exchange of nutrients and compounds between corals and their symbionts. This fact will determine the vertical distribution of corals that is dependent on the depth of light penetration. By this same fact, coral reefs develop in clear waters, where the amount of suspended material is relatively low, placing them in shallow waters with slow currents.

Coral reefs are restricted by water temperature and only appear in tropical and subtropical seas, where the lower average temperature is less than 20º C. Coral reefs have often been compared to tropical forests. These ecosystems have great importance for humans for several reasons. Its value can be divided into direct uses (extractive and non-extractive), indirect uses and no use-value.

Among the direct extractive uses we have a fishery, the aquarium industry, the pharmaceutical and biotechnology industry, and construction, while among the non-extractive we have tourism (being one of the biggest financial contributions they have), scientific research, education and social (cultural, traditional and spiritual values). Within the non-use values, we have the support as sites for animation, reproduction, and nursery of juveniles of different species of fish and commercial invertebrates, an extension of the coastline, physical protection of wave energy, reduction of coastal erosion and support of global life. Due to the continuous increase in global warming, coral reefs, being involved in biogeochemical processes at carbon levels, can store up to 4% of the released anthropogenic CO2. Finally, we have the values of non-use which are the value of their existence, and of the possibility that other generations can enjoy them.

Coral reefs and mangroves are the most productive environments in the world, along with estuaries, seagrasses, and other marine-coastal areas, which are considered places of great importance for the reproduction of marine species. Although the accumulation of sediments on the coast and the death of the reefs are natural processes, the speed of these changes is much accelerated today, mainly due to human activities. At least 10% of the world’s reefs have been destroyed and 30% are seriously threatened. In Costa Rica, the threat situation responds to the same factors, which is added to the seismic activity that has caused some damage. 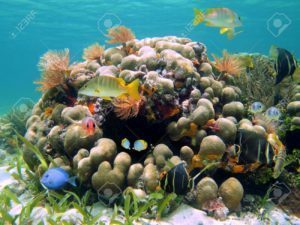 The Pacific coast of Costa Rica has an area of 1,160 km and is quite heterogeneous, being made up of several gulfs, bays, rocky coasts and islands among other geomorphological areas. Due to this peculiarity, and the disposition of the mountain arch that crosses Costa Rica, the north, central and south zone differ in the behavior of their oceanographic conditions, which is reflected in the composition and coral development.

The North Pacific (from Salinas Bay to Cabo Blanco) is influenced by the entry of trade winds from December to April, which produces a seasonal outcrop of the waters, this being more intense as we get closer to the border with Nicaragua. In the Murciélago Islands, in the Guanacaste Conservation Area, the presence of one of the largest reefs in the country (2000 m2) built by the Pocillo ora coral. However, the predominant species in this conservation area is Pavona gigantea, which forms a reef of up to 200 m2 which is considered by one of the only monospecific reefs formed by this species in the Eastern Pacific. It also presents a unique reef for the country formed by this Pocillo Ora Eydouxi coral.

The Central Pacific extends from the Gulf of Nicoya, Punta Leona, to the mangrove of Terralva-Sierpe, and in it we can find few coral formations that have the presence of reef patches formed by Pocillo ora and Portéis in the Manuel Antonio National Park, however, in this park no major scientific research has been carried out regarding the composition and distribution of the corals present in it.

To the south of Punta Dominical is the Marino Ballena National Park, in which we can find a series of coral communities in which the Perites Lobato coral predominates. A total of 13 species of reef-forming corals have been reported for this park, being one of the richest species-rich areas in the Central Pacific of Costa Rica. Also, in this park, you can see the Three Sisters Rock, one of the largest reefs of Perites Lobato on the Pacific coast of Costa Rica. Coral coverage is relatively low in most of the Park, hovering between 0.5% and 10.8%, although in the Three Sisters Rock the coverage of live coral reaches 38%.

The South Pacific covers the Osa Peninsula and Golfo Dulce to Punta Bórico. The reefs are mainly made up of the Pocillo ora alegan, P. damicornis, and Perites Lobato corals, and indicate the importance of the area as a larval reservoir for other Pacific areas. The coral reefs of Golfo Dulce are continental patches, which contrasts with most of the Eastern Pacific reefs that are insular. These can be divided into two regions: the internal gulf that comprises the northern slope of the gulf between Punta Adela and Rincon de Osa; and the
external gulf that includes the area of Punta El Bajo and Sandalwood towards the mouth of the Gulf. Both internally and externally, the predominant species is Perites Lobato. On the outside, the fourth reef is 100% formed by Psammocora stellata which is surrounded by colonies of P. Lobato. The gulf has a total of eight species of coral reef-forming corals, among which we can highlight the largest colonies of Pavona gathered in the Eastern Pacific. From the rest of the south coast to Punta Bórico, there is no detail of the presence of reef formations and there is still research to be done in this area of the country.

Cocos Island has one of the most diverse and best-preserved coral reefs in Costa Rica. The fish community of Isla del Coco National Park is represented by a large number of carnivorous species, and also predators, herbivores, and planctivores. In general, the PNIC reefs are healthy, with complex and functional trophic chains; where species of high commercial value are abundant. The effectiveness of conservation and management activities on Cocos Island can be visualized in the recovery and complexity of the reef community. In total, 17 species of corals have been reported, some endemic to the island (Pavona xarifae and Leptoseris scabra). Likewise, the coral and rocky reefs of the island have one of the largest fish biomass found in the Eastern Tropical Pacific, which places it as one of the most important marine conservation sites in the region, especially for those species with high fishing value.

Golfo Dulce and in the Gulf of Papagayo.

Coral communities and smaller reefs are found along the entire coast except in the Gulf of Nicoya with extensive sandy beaches, such as estuaries.

On the Caribbean coast there are from north to south: carbonated banks, not yet studied, in front of the Tortuguero Conservation Area; between Monín and Limón and also Uvita Island which is located three kilometers east of the port of the city of Limón, in the Caribbean of Costa Rica. Almost 40% of the territories of the island are rocky cliffs; the rest is humid tropical forest and white sand beaches. In 1991, the Limón earthquake lifted the island’s plates in the northeast sector, exposing the coral reef. It is inhabited by some species of birds, sloths, and fish. The island is visited by the green turtles (Chelona Midas) and hawksbill (Eretmochelys imbrícate) and is a site of amidation of the waterbird Sula leuco gaster. The southern part of the island has a coral reef with underwater caverns 10 m deep, inhabited by at least 96 species of fish, and visited by researchers, tourists, and local fishermen. Here you can practice snorkeling. Other Caribbean reefs are located in Punta Cacles and the Guandoca-Manzanillo National Wildlife Refuge.

Do not miss these wonders of Costa Rica and visit these beautiful reefs full of marine life and lots of fun waiting to be explored by you.