Cataloging the biodiversity of Coco Island 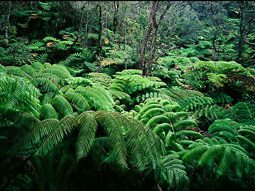 Scientists from the Universidad Nacional (UNA) discovered six new species of ferns in Isla del Coco, a finding that joined the list of terrestrial species in this national park, located in the Pacific Ocean.

According to Alexander Rojas, the project was accomplished with support from the Ministry of Science and Technology, Ministry of Environment, Energy and Communications and National University of Costa Rica (UNA).

Ferns are plants that have no flowers or seeds and reproduce by spores (such as dark grains in the leaves). They proliferate in moist places along the ground or hanging from some trees. They serve as food for insects and forage for some animals and are vital for preventing soil erosion.

“In Cocos Island ferns constitute 25% of the vegetation and at least 30% of them are endemic species, hence it is so important for academic study,” said Alexander Rojas Alvarado, a biologist at the Universidad Nacional (UNA).

The scientists also detected three new records of ferns for this national park, two native species and an invasive-and noticed the absence of two species of ferns of the island themselves, one suspects, might have disappeared due to the proliferation of wild pigs digging in the ground.