SAN JOSÉ, Costa Rica – Sweat slid down the cheeks of more than 30 men wearing shoulder pads, helmets and shorts during a recent football practice at the La Sabana Metropolitan Park in the nation’s capital.

Between shouts and gestures indicating the extent of their physical strain, the Rhinos – an American football team – finish their grueling training session, carried out under the watchful eye of coach Johan Quesada and defensive coordinator Steve Wright. 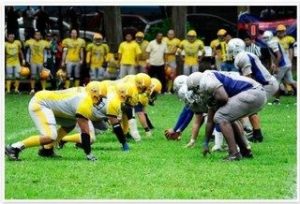 It’s all part of the preparations for the IV season of the American Football League in Costa Rica, which will be the Rhinos’ second, scheduled to start Feb. 4, 2012 in San José, with six teams from nearby towns vying for the title.

Unfazed by winning only one game last season, the Rhinos are working hard to overcome their losing ways – and the team’s poor financial shape – to win the championship.

“We are one of the contenders to win the national title,” Quesada said. “We work hard, regardless of our lack of resources.”

“With the Rhinos, I have learned that playing American football is a work of dedication, passion and love,” said wide receiver Edwin Miranda, 23, who was also part of the Costa Rican national team that played squads from Nicaragua and El Salvador in a tournament in San José in July.

“In Costa Rica we have no extra motivation,” Miranda, who studies advertising and has a part-time job as computer technician, said. “Money isn’t everything, but it is an important part of it.”

But despite the enthusiasm of the players and their willingness to endure intense physical training sessions under the Central American sun, there is still something Costa Rican American Football teams haven’t been able to tackle: The cultural barrier of playing a sport considered foreign and complicated to follow in a country obsessed with soccer.

part has been “trying to overcome parents’ fears for their family, about possible injuries that their children might suffer while playing American football.”

The coach said that he has had “to deal with the issue of a lack of playing fields, given that none exist in Costa Rica, which means we have to improvise on fields that were designed for soccer” – the country’s most popular sport.

The teams also have struggled to buy equipment, which has forced some players living on a tight budget to quit the sport, López said.

“Some teams have their own gear and lend it to the players,” Quesada said.

Six teams participated – the Bulldogs, the Sharks, the Black Gators, the Mustangs, the Dragons and the Toros – with the Toros winning the final and becoming the first winners of the Costa Rican Super Bowl, known as the “Tico Bowl,” in March of that year. 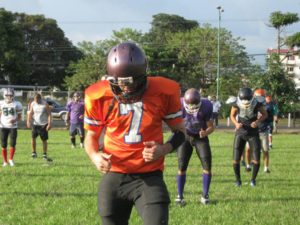 The Costa Rican Federation of American Football (FEFACR) was established shortly after the final.

Since then, the sport’s development in Costa Rica has been promising, said Paolo Vincenzi, president of FEFACR.

The final game for the 2011 championship, played between Bulldogs and Toros, drew 480 fans to the Río Oro stadium in Santa Ana, a town near San José, where most of the league games are played.

In November, the Cártago Dragons hosted its second open tryout, coordinated through their Facebook page. The team recruited players for their minor league (12 to 17 years old) and adult (18 and beyond) squads.

Outreach efforts by the Federation extend to children from pre-kindergarten level throughout high school. The leagues’ teams, from minor to adult level, are open to all those interested in the game.

Through their website, the Costa Rican Association of American Football Referees is offering free training for men and women 16 and older. Their goal is to have 25 referees by the start of the tournament in February.

“It’s obvious that the sport has made major progress in terms of the number of players and coaches per team, as well as in the minor leagues,” Vicenzi said.

Meantime, the Rhinos continue to train for the upcoming championship on weekends, as most of the players work day jobs and see the league as a hobby since they are not compensated.

The teams include students, doctors, engineers, former soccer players and a few unemployed.

But that doesn’t mean they aren’t focused on the game.

“We are training with discipline, and we have the clear objective of fighting and winning the title,” Quesada said.

Deputies from the 6 fractions with representation in the Tico Congress gave their signatures to promote the declaration of...
World News