Costa Rica is an angler’s dream come true. The country’s Pacific ports and beach resorts provide access to some the best deep sea fishing in the world, while the canals and rivers of the northern Atlantic coast feature world-class snook and tarpon fishing. Billfish are the country’s biggest attractions, with abundant sailfish and marlin off the Pacific coast, but the fishermen also hook plenty of other feisty fighters, such as wahoo and roosterfish. Though deep sea fishing is the country’s forte, there is also has great fresh water fishing in Lake Arenal and the larger rivers in the Northern Zone, where anglers can fight with the small but ornery guapote, a hump-backed fish also known as the rainbow bass. Giant marlin, sailfish beyond number; highjumping tarpon, record closs snook an a dozen or more hard hitting fresh water species…

Costa Rica has them all! Fishing just doesn’t get any better than tou will find in friendly, pacefulCosta Rica and because this ia a small nation, it’s possible to enjoy it all on a single visit, perhaps with a day of with water rafting and a volcano and rain forest tour thrown in.

On the Pacific, it’s common to release a dozen or more sails and even a marlin or two in a single day, and not unusual to release more than 30 sailfish a day. There are also dolphin(including the long-standing International Game Fish Association’s all-tackle record 87 pounder), giant yellowfin tuna, wahoo, cubera, rooster fish, a variety of snapper; grouper; blue runners, rainbow runners, snook and much more. And Costa Rica boat operators release all billfish that are not record contenders, so the future of the resuorce is assured. 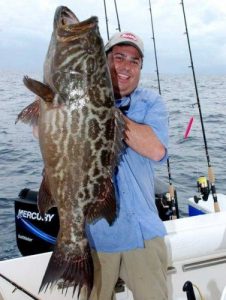 mackerel, mahi mahi and snapper being caught regularly. It is the abundance of billfish that has made that area famous, with sailfish and marlin being taken in phenomenal numbers. There are plenty of ports out of which you can fish the Pacific. In the northwest province of Guanacaste, charter boats work out of Coco, Ocotal, Flamingo, Tamarindo and Carrillo. Further south, you can fish out of Puntarenas, Tambor, Punta Leona, Quepos and Manuel Antonio, Dominical, Drake Bay, Golfito and Zancudo.
Northern Pacific
Cabo Blanco to the Gulf of Papagayo Flamingo Beach, with a full service marina, is the major sportfishing center in the northern coastal area, but boats also charter out of earby Coco’s beach, Tamarindo, Ocotal, Potrero, Brasilito and a few points in between. A bit further south, there are boats operating below Cabo Blanco, out of Nozara, Garza, Sámara and Carrillo beach, a region that gets more protection from the winds that normally blow late December into March and April. Some boats from the more northerly areas often base at Carrillo beach from about December through March if the wind is lowing and the main billfish population is moving north from the central coast area.
Seasons 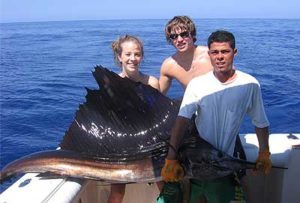 Marlin: Caught every month of the year; with midNovember to early Marh exceptional, then slowing a bit from April into early June when it picks up again, peaking in August and September.
Sailfish: Caught throughout the year; with May through August normally the top season. They may begin to thin out in September and from late August Through November.
Tuna: Peak months are probably August through October; but when all these fails, there are always tuna, anytime of the year you want to look for them, and more oNen than not when you’d just as soon avoid them to concentrate on billfish. The yellowfin and some bigeye tuna are often found well inside the Snata Catalina Islands, 30 minutes or less running time from the beach, while schools of 12 to 20 pounders are usually abundant on the outside. You frequently find concentrations of 40 to 60 pound tuna, and there are plenty of the 200 to 400 pounder caught every year.
Dorado: More properly known as dolphin, these colorful gamester are most abundant from late May through October when the seasonal rains flood the rivers, carryind out ebris that forms trash lines close inshore that they like to lie under. Troll past a floating long and you’ll like hook a dordo.
Wahoo: The first showing begins about the time the rains start in May, peaking in July an August. Most are caught around the rocky points and islands, but you will pick one up occasionally fishing offshore.
Central Pacific
Cabo Blanco to Drake Bay Quepos is center of fishing on the central coast, but there are charters avaible out of Puntarenas, the resorts at the southern end of Nicoya Peninsula, Jacó Beach, Punta Leona and at Drake Bay. Billfish are the target of most visiting anglers, and they are seldom disappointed from around December through April.
Some sails and marlin are taken throughout the year. From most areas mentioned above, it’s no more than 12 to 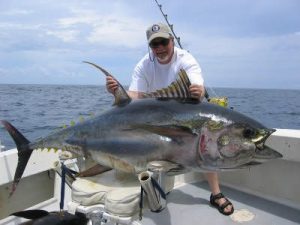 20 miles run to the blue water where most of the billfish action is encountered. Inshore sport includes tuna, roosterfish, wahoo, dorado, jacks, mackerel, cubera, a varity of small snapper species and even snook.
The snook can be taken trolling just outside the breaker line off the river mouths in the area, but are more often fished from shore. Some boats out of Quepos also offer multi-day trips to Drake Bay and Caño’s Island area, overnighting at one of the several lodgescentered around Drake Bay. This region is best known for its eahoo, big cubera and roosterfish, but there are also tuna, dorado, sails and some marlin.
Seasons
Marlin: October is normally the top month for marlin in this area, but action is also good in September and November and occasional blues and rare black are likely to be found any timeof year although they are usually out further than the boats hunting for sailfish are likely to be fishing.
Sailfish: Middle of December to the end of April when they begin moving north is rated the best season, but the big schools often move in about October and occasionally stay longer. A few sail always show among the catch from June through September, mixed with the other species that are found inshore during those months.
Tuna: Found through the year as they all along the Pacific coast, but most abundant from June through September. Most are the eight to 12 pounders, but a dozen pounders and maybe another two dozen in the 100 to 200 pound range are taken every year.
Wahoo: Not common in the area around Quepos, but more abundant in the late summer further south, especially the Drake Bay and Caño’s Island area from late June to early August.
Dorado: Best action begins with the winter rains that start in late May and wash debris from the river mouths lines that the dolphin favor.
Roosterfish Fishing for this hard-hitting inshore species is incredible, with the best spots off the river mouths and the rocky dropoffs. Favored spots are the mouth of the Parrita; Palo Seco between Parrita and Damas just outside Damas; off the mouth of the Naranjo River; around the points at Dominical and throughout the Drake Bay and Caño’s Island area. Best fishing is from June through early September.
Snook: Favored spots are just the many river mouths all along the coast, up the Sierpe river and in the big lagoon on Sierpe. The IGFA world record Pacific black snook was taken in the month of July at the mouth of the Rio Naranjo on a boat trolling just outside the braker line. This a relatively new target for some small charter boats, but the best months seem to be from July through November during the heavy rainy season.
South Pacific: Golfito and Playa Zancudo
Golfito is the larguest town on Costa Rica southern coast, but there are only a half dozen operators scattered between the northern end of Dulce Gulf, the town of Golfito, Puesto Jiménez on the Osa Peninsula and Zancudo 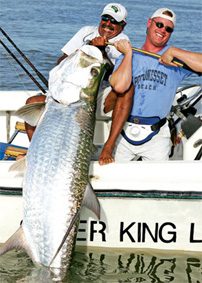 beach. Zancudo is a narrow peninsula with miles of beach on the ocean side and bordered by several rivers on the other. Expect to raise a dozen or more sails and likely a marlin or two outside Matapalo Cape during peak season, and plenty of jacks, runners, mackerel, amberjack, roosterfish and big sanapper inshore.

There are two modern marinas in Golfito, both offering fishing charters as well as facilities for transient yachts.

Light tackle fishing inside Dulce Gulf, with these provision of small caves and rocky islets and shoreline, is also good for small barracuda and snaper, corvina and occasional snook to over 40 pounds. Fishing the dropoff outside Matapalo Cape they get sails, marlin, tuna and other blue water species, and inshore there are roosters that average over 30 pounds, grouper, jacks, barracuda, trophy size Pacific cubera snapper and more.
There is also excellent snook fishing inside the Zancudo Penisula and further north, at the mouth of the Esquínas river. 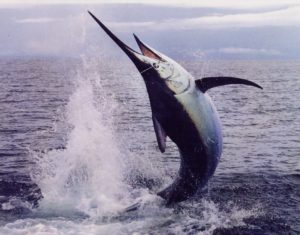 Marlin: August through December is the peak season, but an occasional striped, blue or black may be taken most any month if the water temperature is up.
Sailfish: A few taken off and on year round with best fishing from December through March. It Often slows form April into early June, then picks up again and peaks in August and September.
Tuna: Best fishing for the 100 pound up yellowfin corresponds with marlin and sailfish season, but the schools of up 30 pound tuna can nearly always be found outside.
Dorado: Best runs are traditionally from late May through October, when the rivers are running full.
Wahoo: Not abundant, but occasional fish may be taken most any time of the year while trolling offshore for billfish or around the structure off Matapalo Cape.
Roosterfish: The region is famous for its big roosters and they can be caught virtually any month of the year.
Snook: All year, but best from mid or late May through July and in January and February.

Caribbean
The canals and rivers of the northern Caribbean coast boast some of the best snook and tarpon fishing in the world, and they are lined with lush rain forest, which adds to the natural experience. The tarpon average about 80 pounds in the Caribbean canals, and though the snook are much smaller, they are good little fighters that taste great. About half a dozen fishing lodges are located in Barra del Colorado, Tortuguero and Parismina, all on the canals, and the houseboat Rain Goddess offers roving adventure that let anglers fish the canals, several rivers and hidden lakes.
Seasons
Tarpon: They’re always around, with traditional high season from December through May, but that was a 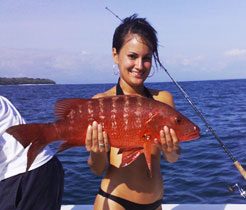 number of years ago when all of the lodges were fishing with 16-foot boats and couln’t get outside the river mouths as they do today with lager boats designed for that purpose.
Snook: Big snook generally peak from March through Mayand again September through the end of November.
Fat Snook: (Calba) Peak from mid-Novemberthrough late January, but often make an appearance much earlier.
Billfish: When you can get outside to the blue water you will find Atlantic blue marlin most any time of the year. Most are caught from February through September.
Wahoo: Plentiful on the outside from early February through mid June.
Dorado: Caught jus outside the river mouths throughout the year. Best fishingis when the runoff carries out the debris that forms inshore trash lines.
Tripletail: January through June.
Kingfish, Spanish and Cero Mackerel, Jack Crevalle, Barracuda: Abundant close to shore any time te ocean is flat.