Rogelio Fernández Güell. Writer, poet, politician and Costa Rican journalist. Puritan man, principled, courageous and sincere with his political ideals. He was a deputy to Congress and from this seat and his newspaper openly opposed the government of the Tinoco brothers (1917-1919), as well as the death penalty. He founded the newspaper “El Imparcial” (the impartial), which he directed. He defended the right to vote, the freedom to choose and called on the people to participate in national elections, not to be apathetic. 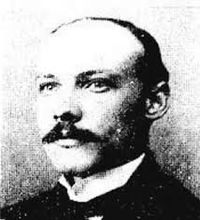 Rogelio Fernandez read all the books in his father’s library, which contained the most famous French authors, such as Victor Hugo, Alfonso de Lamartine, and Chateaubriand. He memorized hundreds of passages and aphorisms of Don Quixote de la Mancha, which he recited every time he had a chance. Even in the newspaper articles, he wrote later, traces of the thought of Miguel de Cervantes Saavedra appear. He was the cousin of the Costa Rican economist and historian Tomás Soles Güell (1875-1943).

He received his intellectual formation in Spain, where he lived many years of his youth and worked for a long time. He also resided in Mexico. He had a great friendship with President Madero, who appointed him director of the National Library. The revolution of Huerta, in Mexico, makes his return to Costa Rica. Upon his arrival, he founded the newspaper “El Imparcial”, which he directed. In it is the majority of his works as a journalist. Writer and poet. He was a deputy to the congress and from the seat and his newspaper opposed the Tinoco brothers, especially opposing the death penalty. He was a puritanical man, principled, brave and sincere with his political ideals. It is possible that he started with the spiritualism or esoteric philosophy of which he is the founder and principal teacher in Costa Rica. 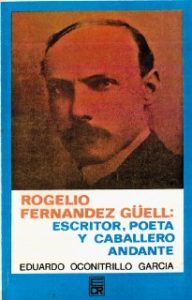 In 1901, Rafael Iglesias Castro was the president of Costa Rica. He represented the coffee planters oligarchy and suffered a great loss of popularity with the general population. The fall in coffee prices, plus the increase in public debt and the construction of the railroad to the Pacific, was the cause of a severe economic crisis, as a result, the vast majority of the population wanted the expulsion of the president. At that time, one of the first articles of Fernández Güell appeared, signed under the pseudonym “Sanson Carrasco” -the famous character of Don Quixote. The article was called “Los Quijote de mi Tierra” (the quijotes of my land) and appeared in the newspaper “El Tiempo”. He ridiculed several politicians who were in the national arena. The result of “that irreverence” was the criminal complaint suffered by the young journalist -just 17 years old- and the editor of the newspaper. A judge had Fernandez and his boss imprisoned in a San José prison.

Instead of being intimidated, Rogelio Fernández Güell wrote from the San José prison a series of articles entitled “Elections” -which “El Día” newspaper published-, where he defended the right to vote, the freedom to choose and called on the people to participate in national elections and not to be apathetic. After 20 days, they were released: the editor’s shortage had served as an attenuating circumstance. In this way, he began his journalistic activity, with articles and columns of an invariable political cut.

Over the months, Fernández Güell was hired by the newspaper “El Derecho”, of San José. Its editorials and background comments are loaded with political criticism against the existing system. Fernández signs his works under the pseudonym “Pascual”. His character and behavior placed him among the great polemicists of his time, mainly when he faced a bitter dialectical discussion with his former teacher, the Cuban Antonio Zambrano, who had mocked the neo-republicans because they did not have a candidate presentable to the presidency of the Republic.

At 19 years of age, Rogelio Fernández Güell attacked the powerful group of oligarchs, businessmen, and politicians, by publishing an article in which he defends the republican regime. Exactly for that reason, Fernández Güell would rise against Pellico Tinoco, the dictator who trampled on the country’s Constitution.

At the beginning of 1902, after a series of articles criticizing the “wild custom” of armed duels, a Luis Castro Ureña challenged him to a pistol duel. Fernandez reluctantly accepted, knowing that he had not insulted anyone and that everything was an absurd occurrence of the challenger. They both appeared one dawn, revolver in hand, in “La Sabana”, a field west of the town of San José. Both fail their respective shot and both lives are forgiven reciprocally. Later they would become good friends.

In March 1902, Rogelio Fernández, aged 18, published a book containing the poem “El dolor supremo” (the supreme pain) and a necrological eclogue in the face of the death of the writer Manuel Argüello Mora.

Mexico and the United States.

In Barcelona, Spain, he met his wife, Rosa Serra, whom he married on September 15, 1906. The family of the young woman did not agree with that wedding. That same year the newlyweds left to live in Mexico. Using his influences, Rogelio Fernández got a job at the Astronomical Observatory in Mexico City. Later he was named consul of Mexico in the city of Baltimore (in the United States). He became a fervent follower of spiritualism and sent written contributions to the magazine “El Siglo Espírita” (the spiritual century). He published his occultist poem “The eternal life”. In 1907 he published another occultist composition entitled “Gritos de Angustia”, in which he affirms his beliefs in the immortality of the soul and in the existence of a single God that rules the universe.

In 1907, still, a consul in Baltimore, his first son, Juan Rogelio, was born. Fernández was increasingly introduced to spiritualism and Freemasonry. In that year he wrote his work “Psiquis sin veil”. The Mexican government demanded that he be nationalized Mexican (and thus lose his Costa Rican nationality); but Fernández Güell refused, so he had to resign from the consulate and return to Mexico.

On November 20, 1910, the Mexican Revolution began. Rogelio Fernández wrote a chronicle about these historical events. He felt a true admiration for the leader Francisco Madero -who would become president of that country-. Rogelio Fernández published his essay “El Moderno Juárez, Study on the personality of Don Francisco I. Madero “, which was first published in installments in the biweekly newspaper “El Amigo del Pueblo”.

Rogelio Fernández Güell dictated several lectures on spiritualism and theosophy in Mexico City. He founded the newspaper “La Epoca” and the philosophical magazine “Helios”, of which he was a director in 1912. He also published in installments in the same magazine, his spiritist novel “Lux et umbral”. Other works of his that were published at that time were: “poem «To God»; the essay “Spiritualism and magic in the works of William Shakespeare”, from whom a completely different concept was formed than that of past biographers of the English playwright.

Rogelio Fernández -as a journalist and writer- was also a front line witness and lived an experience that was more intense with the initiator of the revolution, the so-called “apostle of democracy”, Francisco I. Madero. Two testimonies. As a result of this experience, Fernández Güell, apart from knowing Pancho Villa, left two texts for posterity. The first writing is a brief essay that defends Madero from his detractors, who considered him incapable of replacing Diaz; On the contrary, Fernández Güell reviews passages in the life of the Mexican revolutionary to conclude that Madero had the sufficient qualities to be considered a true statesman, of the stature of the indigenous president Benito Juárez. This text bears the title “The Modern Juarez. Study on the personality of Francisco I. Madero”.

The second text is much broader and narrates the impressions of Fernández Güell obtained during the years he spent next to Madero; In addition, it relates the development of the Mexican Revolution since the last years of the Porfirian regime, including the celebrations for the first centenary (1910) of independence, until the assassination of Madero, already president of Mexico, by henchmen of the traitor General Victoriano Huerta. . Its original title is “Episodes of the Mexican Revolution”. Both writings were then published in 1973 in a single volume by Editorial Costa Rica and with an introduction by Víctor Manuel Arroyo.

He married in Spain with Doña Rosa Serra Soles, and from that marriage, three children were born: Juan Rogelio, Federico, and Luis. His first son was born, in 1907, while he was still consul in Baltimore, United States. In 1915 his second son Federico was born in Costa Rica. He returned to Spain during the First World War, where his third son, Luis, was born in 1917.

He arrived with his family in San Jose, where he was received by relatives and friends – among whom was Federico Pellico Tinoco (who would be the mastermind responsible for his murder in 1918). He was received at his home by his mother in a truly moving scene. In that year the president of the Republic was Ricardo Jiménez, who had defeated Rafael Iglesias with an overwhelming majority. He died assassinated in a small village “Buenos Aires” near the town of Puntarenas on March 15, 1918.