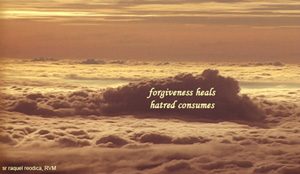 There’s a scene in a classic Paul Newman movie, “Hombre,” in which two men look down from a shack where they’re trapped upon a woman tied to stake in the desert heat, crying out ever more weakly for help as she slowly dies of thirst.

One of the men asks, “Where is God?” The other man, who happens to be the woman’s greedy, lifeless husband, replies flatly, “There is no God.”

With bitterness the first man responds, “And no hell either?” “Oh there’s a hell alright,” the husband says as he walks away.

It’s interesting to contrast this philosophical view of hell, which could be called realist, with the worldview at the core of a recent film, “The Black Swan,” for which Natalie Portman won a well-deserved Oscar.

This muddled ‘thriller’ is a study in solipsism, the belief that the only thing we can be sure exists, and have any true knowledge of, is the self.  Indeed, “Black Swan” embodies a view of evil that’s entirely self-centered, reflecting the popular notion that darkness can only be understood in the context of the separate self.

Without giving the film away, the movie turns on the dilemma of a repressed, virginal young ballet dancer, shattered by her struggle to embody both the good, white swan, and the evil, black swan. The movie is a mess, but it manages to push the psychologization of evil to its logical absurdity. In short, it’s all in your head honey.

To be sure, hell is made within, but it can and does manifest outside the individual as well. Though the doomed denizens of Auschwitz probably often thought they were having a nightmare, the ‘showers’ and ovens were a reality not of their making.

Is it possible to find out what, if any, actual meaning hell has, without any element of punishment, or even judgment?

But I submit that it’s only when we divest ourselves of these shadows that we can peer into the darklands of hell in life, and, if it exists, after life.

Hell is a byproduct of evil in human life, a hopeless place full of dead souls here, and in the hereafter. It is not an infinite sentence of damnation, a place of eternal punishment. Hell is a manifestation of man’s consciousness, both in life and perhaps in some form, after life.

Though supposedly good people want to see bad people punished in an imagined afterlife for the sum of their sins during life, cosmic intelligence has no such calculus. There is a dimension of immense suffering, certainly, but it originates, and is first experienced in life. If there is a Hades, it is a place of continuous suffering and separation, starting from and rotating back into the world.

No matter how badly a person has lived, it’s never too late for the living to avoid going to hell. But even if they do, hell isn’t a permanent condition, just a long, slow slide into oblivion for those for whom it’s too late.

It’s strange, but God can’t release us from hell; only another human being can. With a supreme act of forgiveness, the living can free the dead from hell, though we first have to forgive and free ourselves.

In a sense, a real or imagined hell after death no longer exists, because man (who made hell to begin with) is fully manifesting it on earth in the 21st century. And a dead culture such as we have in America is by definition an outpost of hell.

Can even the most heinous people get out of hell? Take someone like Timothy McVeigh, the architect and cold-blooded murderer who blew up the Murrah Federal Building in Oklahoma City in 1995, killing 168 people.

Completely remorseless to the end, McVeigh, most ironically, left a note quoting the last line of   “Invictus” (the same poem that sustained Nelson Mandela in his nearly three decades of imprisonment on Robben Island!): “I am the master of my fate: I am the captain of my soul.” Indeed.

With forgiveness, can the living free even the likes of Timothy McVeigh from hell? They not only can, they must. For if we don’t, the evil that so infected the likes of McVeigh infects us, slowly twisting and suffocating our spirits as well. Besides, for someone like McVeigh, having to return and face what he’s done is a fate worse than remaining in some holding pen of hell.

In any case, I think it’s harder to forgive a living person that keeps doing harm than it is a dead one in hell.