Tico is a word composed of 2 syllables that, in turn, comes from the Latin combined with a certain Greek root. With this word, we refer to the colloquial language that identifies any Costa Rican.

Historically, the name “tico” was born during the 1st half of the 19th century. According to tradition, this word appears in the Central American war against William Walter’s filibusters. It gained more popularity when fighters from other countries listened as those Costa Ricans called, for example, their brothers as “hermaniticos” (very little brothers) and not simply “hermanitos” (little brothers). 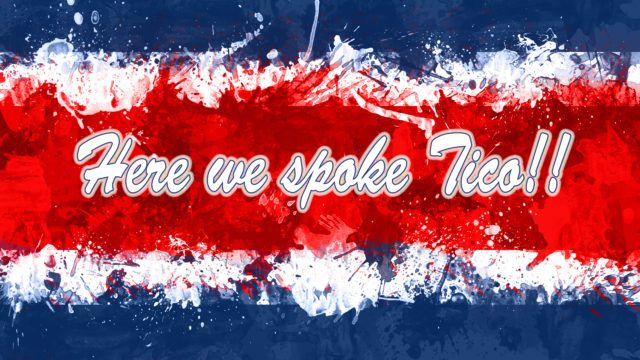 Likewise, Costa Ricans used to say words like patico, chiquitico, gatico, etc., instead of a duckling, a little child, or a kitten.

This word or simple syllable, with the passing of years and different generations, became known as a diminutive of affection, that is, it highlights the affective value of a person towards another person, object or thing.

With the passage of time, the popular name spread to other countries of Central America and, after the beginning of the country’s tourist boom in the mid-1980s, the term became international.

In fact, the use of the diminutive tico is not unique to Costa Rica. In addition to it, it is used by speakers from the Dominican Republic, Colombia, El Salvador, Cuba and Venezuela. It might be said that even in Spain, specifically in Aragon, it is customary to use this diminutive. However, its distribution as regards foconalization is slightly different.

It is worth to mention that some monotonous and old-fashioned Costa Ricans, who are dedicated to studying the essence of each word, are currently not very happy with the “tico” expression. They wield that Costa Rica is a complete and respectable country, which should not have a carnivalesque derivation that points to a dwarf entity, not the full word but the diminutive.

But many of its inhabitants consider that this country has a very big spirit. Moreover, it is a great heritage of those important ancestors and a synonym of national pride.

Actually, any Spanish speaker can easily communicate with Costa Ricans. Although we do not know one of the many terms they use, they are quite basic and understandable. If something truly catches our attention is the Ticos’ richness in vocabulary and terms.

And here we show a little of their way of speaking:

Al propio: Do something with great intention or with a lot of dedication
Aviraguarse: When clothes or objects are damaged by having them long stored. They deteriorate with fungal stains.
Bases: Feet
Bañazo: That shame a person feels at a certain moment
Chapulín: An individual thief or antisocial
Chicha: Anger
Chao: Goodbye, See you soon, see you later
Cito: A diminutive that is used to address a woman or a man that you are very well profiled physically
Canchis canchis: Having sex
Cuerero: Man who walks with a woman not elegant at all
Colado: Person who goes to a party even if he is not invited at all
Dar por la nuca: Have a good salary for something done
Estar arratonado: Presence of a lot of muscle pain
Fachudo: Being poorly groomed, looking bad
Ir en carrera: Go fast, go in a hurry
Jalea: Marmalade, something sweet
Megamol: Shopping center
Natilla: Cream of sour milk

Pachanga: Any celebration, party
Picaflor: Don Juan, a women’s conqueror
Pega: Person who often likes being on top of people, cloying
Parqueo: Parking
Pichudo: Something is that excellently good
¡Que rajao!: Expression that is used when something is very surprising
Sapa: Someone who speaks more than it should
Taqueado: Trapped
Tabis: A word used to address someone who consumes a lot of alcohol
Tierrosa: An easy woman to take to bed
Tuanis: Very good
Vacilón: funny or hilarious
Wakala!: Expression of disgust, in bad taste
Zarpe: The last drink shot

Finally, it is important to mention that not necessarily a word must end in “-ico” to represent the popular vocabulary of this area. These expressions are few for all those that are part of the Tico colloquial dictionary.