In a restaurant, in the cinema, in a library, in the line for a concert, you can feel their presence, different ring tones and the same function, keeping in touch with those people who are important to you.

Sometimes, it can be a true blessing; at others, it is a real nuisance, an invader of our privacy, or a controlling factor of the person who calls us. The truth is that cell phones have taken over our lives little by little.

The mobile phone or cellphone is such an indispensable device at the present time.  At first, mobile phones could only be used in vehicles because of their sizes, later reduced to a portable unit and finally to the pocket-size we use today.

The cellphone system was created to meet the demand for mobile communication within a limited radio frequency spectrum. This characteristic is the original factor that continues to motivate its development, compared to other factors such as battery life or device size.

The system must accommodate thousands of users within a reduced spectrum to transmit more and more information, like voice transmission but also the demand for images, videos, and internet access, all continue to increase.

The history of the cell or mobile phone is the sequence of development, technological innovations, and scientific discoveries that have allowed its creation. They also include their evolution over time to become the multifaceted tools we handle today. 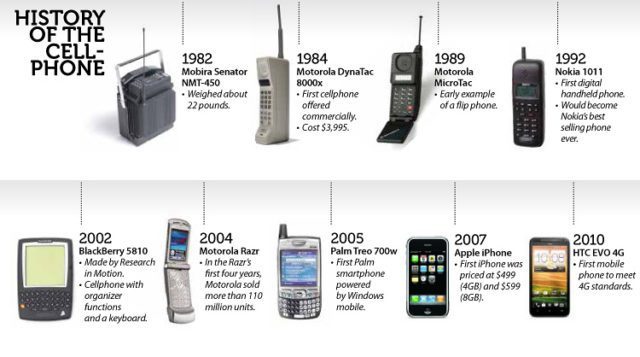 The cellphone is an independent telecommunications device. It allows you to perform different operations, calls, text messages, access to the internet and to various digital applications. It is an indispensable device in today’s world, whose history shows the technological changes going through societies since the end of the 20th century.

Long before the cellphone, telephones were invented by Antonio Meucci in the late 19th century and patented by Alexander Graham Bell. It was designed to transform electrical impulse into the human voice. Throughout almost 100 years of history, the telephone evolved a lot until it became the devices we have today.

However, for the cellphone or even the wireless phone to be possible, radio communication first had to be discovered. That is to say, the cell phone required the development of information transmission via electromagnetic waves and subsequently through satellite microwaves. Once these technologies were discovered, it was just a matter of time until the creation of the first wireless phones.

The first cellphone in the world

The first commercial cellphone prototype was demonstrated, in 1983, by Motorola. The phone was a Dyna TAC 8000X. It began to be sold in 1984, weighing around 1.5 kilograms and 8.9 centimeters in size, and its battery allowed just 1 hour of communication or an 8-hour wait on the network.

The 2nd generation of cellphones was born in the 1990s. They used GSM SYSTEMS (Global System Mobile Communication, a European standard) and frequencies between 900 and 1800 MHz, which presented the step towards the digitalization of cellular communications, improved quality of voice, and security levels.

At the beginning of the 21st century, the 3rd Generation responded to the need for telephones with internet connectivity, videoconferences, television, and file downloads; that is, working as very small computers.

This is the generation of high-end smartphones of higher capacities, thanks to its internet connection at high speeds (bandwidth) and reception of high-definition videos. It is the technology currently used in the world of mobile telecommunications.

The 5th Generation of smartphones is currently in development (2019). Powerful companies such as the Chinese Huawei and the Russian Megaphone have been testing it since 2014, for manufacturing a new kind of technological generation that will impact our future way of life.

Faced with the need to display the information on the screens, the keyboards were removed, which were replaced by tactile instructions within the screen. It was known as Touch-Screen technology. In addition, more bulky and rectangular-shaped devices were designed.