Zoo must implement a castration plan for its wild species

Ayahuasca Tourists Redirect Their Faith From Spirits To Molecules

The Impact of Ayahuasca Tourism

The Ponderosa Adventure Park, in Liberia, must prohibit its visitors from taking selfies with the animals they have and also feeding them. This was ordered by the National System of Conservation Areas (SINAC) to the zoo.

The document, establishes a series of instructions to the park, including a modification of the route of the tours, to bring it into compliance with the Wildlife Conservation Law and its Regulations.

“The Ponderosa Adventure Park advertising and photography team, as well as its tour guides, will not be able to promote inappropriate selfies or photographs with wild animals, where there is direct contact or manipulation of fauna,” reads the fifth point of the text.

The zoo’s own social networks show photographic sessions in which a giraffe puts its head inside a car for tourists, during a marriage proposal. “The feeding of wildlife by tourists or visitors, or the placement of feeders for wildlife used in places to attract wild animals, is prohibited,” adds the following subsection.

The latter includes the practice of individuals giving carrots or other vegetables to -for example- zebras from the park’s collection; which also appears in the images published by the park. 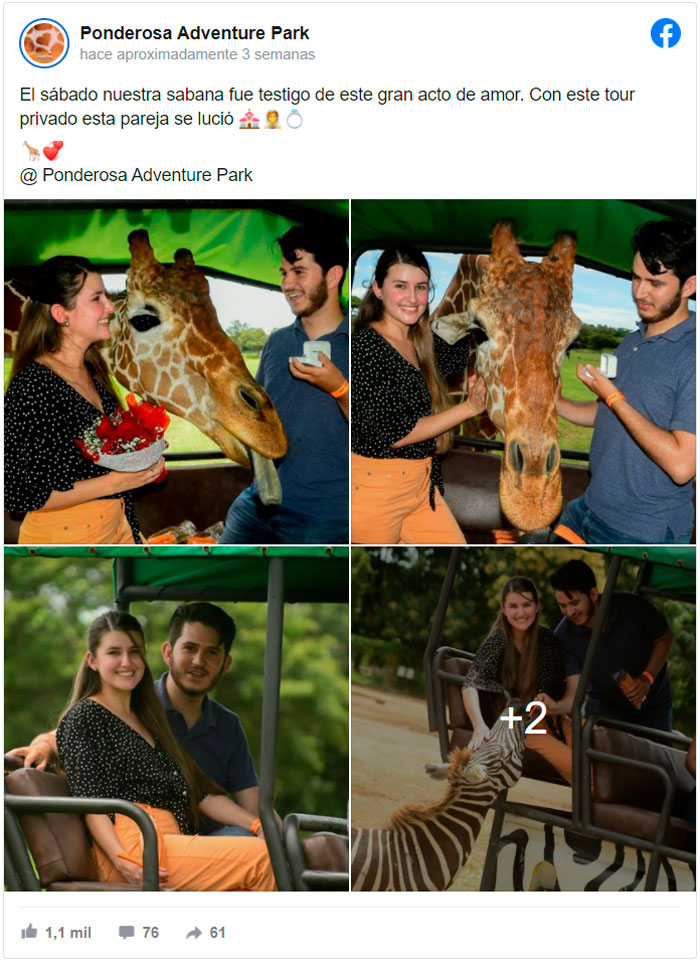 The zoo is also obliged to change its routes, so that the tours stop going through the enclosures where the animals are found. The administration can also make changes to its infrastructure, to prevent vehicles from passing between the perimeters of the species.

Also, the document states that Ponderosa Adventure Park must implement a contraception plan for its species. “If there are currently born young or pregnant females, these will be the last litters of the zoo, taking into consideration the gestation period of the individuals at the management site. By October 2021, there may be no more births of any of the species in the collection,” the document details.

The president of the zoo’s developer group, David Patey, showed his opposition to the castration of the species, asking the President of the Republic, Carlos Alvarado Quesada, to reform the Regulations of the Wildlife Conservation Law.

The instructions are mandatory and are to be followed immediately. Failure to comply, specifies the official letter, “will bring administrative and criminal consequences.”

Ayahuasca Tourists Redirect Their Faith From Spirits To Molecules

Fixation on the tradition has to do with the fact that "the traditional" is associated with "the legitimate". However,...
Money

The Impact of Ayahuasca Tourism

Attend the Tinamastes Seed Festival and Enjoy Its Varieties, Music and Food

The Cocoa of Our Tico Land