The use of electric propulsion to lift satellites into the geostationary orbit can result in significant degradation of solar cells, according to a new study.

Prolonged journeys result in greater exposure to the damaging effects of outer space weather. Understanding the size of this risk is essential for commercial operators to take measures to mitigate the effects and protect their assets.

The study concludes that after a radiation storm, the maximum output power of the solar cell could be reduced by up to 8% at the time satellites reach their target destination by increasing the orbit by electric propulsion. This is equivalent to the level of damage that would be expected after spending some 15 years in geostationary orbit.

During a radiation storm, the charged particles released by the Sun are trapped within the Earth’s magnetic field, forming the Van Allen radiation belts that surround the Earth, and collisions with these charged particles cause damage to the solar cells. This degradation is up to 8% of the output power in the worst case, but even in a quiet environment, the study predicts a 1-3% reduction in production.

Lead author Alexander Lozinski, a space weather scientist in the British Antarctic Survey (BAS), comments: “Now that we understand the level of damage caused by a slower journey into the geostationary orbit, commercial satellite operators can plan optimal routes during the design and planning phases of the mission to ensure the best life for your products”.

In the last 4 years, commercial satellite missions have begun to employ the use of electric propulsion to elevate the orbit. Without the need to transport chemical propellant onboard, the size and mass of the satellite can be reduced, which translates into significant cost savings. Reducing the size of the satellites could allow the launch of two spacecraft in the same rocket (almost half the launch cost). Alternatively, mass savings could be used to accommodate additional / larger payloads, allowing higher revenues or greater technical capacity.

In a conventional launch, the satellite is placed in a geostationary transfer orbit by the launch vehicle and uses chemical propellants to reach the geosynchronous orbit. This orbital transfer maneuver usually takes a few days. However, when (only) electric propulsion is used, it can take up to 200 days to reach the target orbit due to a lower thrust. This causes the satellites to spend more time in the Van Allen belts, where they are exposed to the damaging effects of space radiation.

“We studied 3 different types of orbit magnification and found that although the degradation of 8% is very high, the careful choice of the orbit and shield can reduce this to an acceptable level”, explains Lozinski. “For example, transfer orbits with a high initial apogee (maximum altitude) allow satellites to pass through regions where trapped protons are present, at higher speeds, reducing the level of radiation damage.”

“Commercial satellites with all-electric propulsion were introduced for the first time in 2015”, says Professor Richard Horne, head of the space weather team at BAS. “We never expected such a large reduction in energy from a radiation storm. The good news is that this study will help the satellite industry plan the best orbit that reduces radiation damage”. 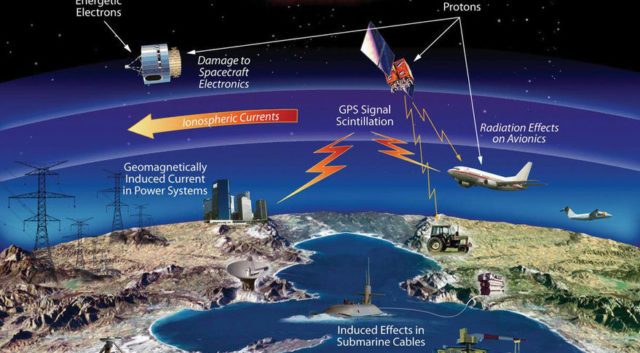