Invisibility has unleashed our imagination since ancient times. Thousands of science-fiction books and films based on this power have been written. Likewise, hundreds of research groups from universities around the world, made up of mathematicians, physicists and engineers, try to make it possible.

The so-called ‘metamaterials’, compounds with a structure designed to possess exotic properties, seem to offer the scientific answer to this, for the moment, fantasy. Making these materials requires a deep understanding of the structural possibilities, and the best way to do it is through mathematical modeling.

One of the first references to invisibility appears in Book 2 of the Republic of Plato: the ring of Gyges. According to the legend narrated by the Greek philosopher Gyges of Lidia, a pastor in the service of King Candaules of Lidia found a gold ring that allowed his wearer to become invisible. This idea has been used in many stories and, among them, in sagas such as “Lord of the Rings” and “Harry Potter”. Potter did not have a ring, but a cloak that made him be invisible.

In the real world, researchers John Pendry of Imperial College and David Smith of Duke University have described how to create an invisibility cloak using, instead of the hair of a creature called “Demiguise” (as explained in the book by J. K. Rowling), metamaterials.

By altering the geometry, you can adjust the refractive index of the metamaterial to take positive values close to zero or negative (natural materials always have positive indices). Precisely, there lies the “trick” of invisibility. We know that light-rays bend when passing materials with different refractive indexes, as happens when passing water and air.

The idea is to achieve refractive indexes that allow diverting the light in an unusual way. After surrounding the region of the confined space behind the surface of the material, each ray of light emerges with the same direction that it had initially. Thus, our brain will interpret that there is nothing between the source of the light and us.

The most used elements to construct metamaterials of these properties are small electrically resonant “particles”, which are called Split-Ring-Resonators (SRR). To understand from the beginning the exotic properties of a metamaterial formed by SRR, each of the particles is modeled as an electrical circuit. Using the Kirchhoff voltage law, its evolution is described by a 2nd order differential equation.

Using SRR, Smith and Pendry were able to produce the 1st layer of invisibility. Of course, it only worked with light with microwave frequencies, not with visible light, since the former has a much longer wavelength, and metamaterials can only manipulate electromagnetic waves that are larger than each of their SRR. 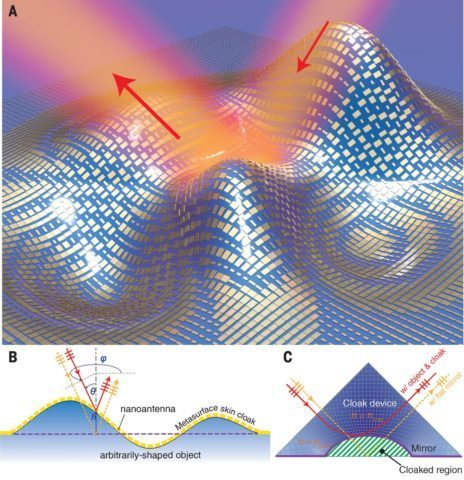 Although the principles applied in the Smith layer could also be applied to the visible spectrum, for now, it has not been achieved, nor is it known if it will be possible since much more advanced nanotechnology techniques are required to control smaller wavelengths (with artificial atoms of much smaller size).

Beyond its applications to invisibility, the interest in metamaterials has not stopped growing in the last decade. In areas such as optics and electromagnetism are beginning to reach a certain maturity, but it would be very interesting to transfer this knowledge to other fields such as elasticity, acoustics, structural mechanics, and diffusion.

For this purpose, mathematics will remain fundamental. In addition, there is no doubt that mathematics can also be enriched by studying these issues.