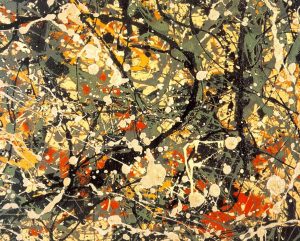 Artists generally see imagination as the most important human faculty, and it is easy to see how they make that mistake. Not only would creative expression be impossible without imagination, but so too would vision and design, and therefore the construction of cities, bridges, and buildings.

Indeed, there could be no cultures without imagination. But when imagination is given priority over stillness of mind and fullness of heart, all kinds of darkness can and does ensue.

Imagination is a faculty of symbolic thought. It is the ability to picture things that do not exist, to generate images, indeed entire cultures, from mental materials. It’s not without reason that people speak of one of the greatest failings as being “the failure of imagination.”

Even so, the creative source of imagination, much less the infinite wellspring of insight, originate from beyond thought. Insight is not imagination, but rather the fountainhead and foundation for imagination.

Most people, including philosophers, assume that humans are ‘hermeneutical’ creatures, which is to say that interpretation is inescapable. It’s true that it is exceedingly rare for people to perceive without interpretation. But we can see things as they are in the moment, without interpretation and imagination, although we can only see what is through continuously questioning what we think.

It’s not only possible to let go of words and images altogether, and see what is without interpretation or imagination; it’s 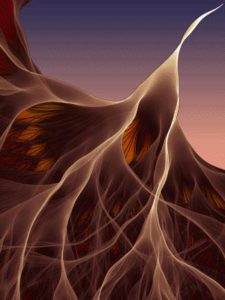 essential to do so. And because the brain is capable of being in a state of non-interpretation, however briefly, it needs to be given the highest priority.

A person who learns the art of methodless meditation can have artistic imagination and creativity; but the artist who puts imagination first cannot meditate. The paradox is that creativity, like creation itself, flows from negation and emptiness, not addition and accretion.

About a dozen vultures are circling lazily in a gentle breeze over the gorge and canyon in the relatively unspoiled Upper Park. They are graceful searchers for gruesome remains.

Without the associations that go with the name and knowledge of vultures, they are seen as they are, and are beautiful creatures, with an important place in nature.

It’s an unseasonably warm winter’s afternoon, even in northern California. A quarter mile from the parking lot, I pass a couple sitting in large lawn chairs, complete with drink holders, books, and other paraphernalia.

It’s also a year of drought, and while the grass along the slopes is green, it’s not lush. The first wildflowers have appeared a few weeks early—I spot a smattering of blue lilies, and a single trio of California poppies. 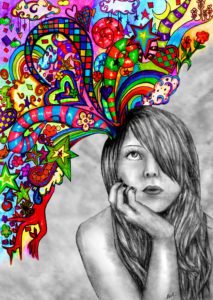 A few vultures glide down the gorge below eye level, only a few meters away. I can see their vigilant eyes in their red heads, and the long feathers that protrude from the ends of their wings, looking like delicate fingers.

Sitting on the ground at the lip of the gorge for over an hour, I don’t see another soul. The vertical slabs of the gorge cutting through the canyon are stained with ochre, and subtle shades of yellow and red run down many of their faces.

As the mind completely quiets and meditation deepens, the sight of the angular, colored rocks evokes not merely centuries, but millennia, encompassing the long and tortuous history of man.

What is a human being? Isn’t a human being one who is capable of having a mind/brain that is completely, effortlessly quiet, an individual who has a mind that can totally set aside the movement of thought and knowledge, and be alight with insight?

There’s an essential intent within evolution, inherent in the development of galaxies, stars, planets, and life forms. A human being can realize that cosmic intent, which is without a deity, plan, or pre-design.

An hour-long hike after the sitting is extraordinary, with tremendous views of the cliffs on both sides of the canyon, and panoramas of gentle slopes stretching toward the horizon.

When you think of a serene, somewhat luxurious trip to a foreign location, preferably someplace close to nature, you would think of countries like Maldives, Dubai, New Zealand, and various other European Countries
World News

Children’s Museum of San José Will Illuminate Its Facade With 4.000 Bulbs this December 1st

What to Do When Grieving for a Pet