As a student, no matter if you’re in high school, college, or completing a post-graduate program, getting good grades is obviously one of your top priorities
Read more

Despite the economic crisis caused by the Pandemic, the construction sector is still active, especially class A has the largest inventory
Read more

The government of Costa Rica presented the program to commemorate the “bicentennial of its independence” and unveiled the restored...
Read more
TCRN STAFFhttps://www.TheCostaRicaNews.com
Creating a Conscious alternative news network that we feel the world needs. Pura Vida! 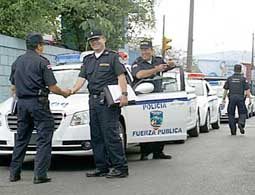 The agreement will benefit more than 10,000 officers of the security forces, penitentiary police, traffic police and immigration agents.

“We have officers with more motivated and better conditions. The agreement focused on all police forces, but each differently, ” stated Vice President Robert Thompson, who led the negotiations with the unions.

The changes include improvements in wages and various incentives such as 35% in the recognition by the trajectory of the officers and will start being implemented in January and a 25% increase on basic salary by way of availability.

Increases in training and support will be provided for police officers to complete studies, with rearrangements of days not to exceed 12 hours.

As a student, no matter if you’re in high school, college, or completing a post-graduate program, getting good grades is obviously one of your top priorities
Read more
Real Estate

Forty-six Ngöbe indigenous families from Conte Burica will have electricity thanks to the donation of solar panels for their homes.
Read more

AERIS, administrator of the Juan Santamaría Airport, launched the first marketplace platform for airports throughout the region
Read more