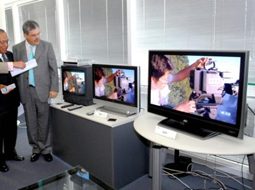 Costa Rica has officially adopted the digital television format created by Japan, but adapted to be used by Brazil in Latin America.

By an executive order published in La Gaceta, Costa Rica and joined countries such as Chile, Argentina, Venezuela and Peru, which have also chosen this standard, technically known as ISDB-Tb.

Digital TV is a modern system of wave transmission, including broadcast television and satellite. Digital technology will eventually replace the analog system used in the country today.

Digital TV offers higher quality audio and video and interactive services and mobility. In addition, its introduction will allow the country’s frequency spectrum, which is used for TV and telecommunications, to be used more efficiently.

There are several digital television formats,the European (DVB-t), the American (ATSC) and Japanese-Brazilian. They were assessed by a special joint committee formed last year.

After meetings, presentations and technical tests, it was concluded that the Japanese-Brazilian format is “more robust” technically and has the “greatest qualities” to be developed in Costa Rica.

The tests were conducted in different parts of the country and led to the conclusion that the ISDB-Tb “presents a measurable performance far superior to the performance of the other two standards.”

“From a social perspective, the technical merits of the Japanese-Brazilian standard, will allow better coverage and the inclusion of hitherto excluded communities on broadcast television,” reads the recommendation report, submitted on April 29.

Although not obliged to follow the recommendation, then President Óscar Arias, the Minister for the Presidency, Rodrigo Arias, and his Minister of Environment, Energy and Telecommunications, Jorge Rodriguez, signed Decree No. 36 009 MP-MINAET, which sets the ISDB-Tb as digital TV standard for Costa Rica.

Translation and editing by TCRN staff