Ten Commandments Down to One

I’d been deathly ill for a fortnight with food poisoning. Having foolishly asked the universe, in a meditative state, ‘should I become a vegetarian?’ the cosmos answered, rudely.

A week later, I saw death, not in space but in time, waiting for me two days ahead on my present course. Ambulatory after my brush with death, I asked myself while walking into the little concrete park across from the house that Steve Jobs built (Apple computer headquarters), ‘Did my asking that question have anything to do with my getting so sick?’

Just then a tiny, elderly Asian woman, incongruously carrying a can of V-8 juice, made a beeline for me from 40 or 50 meters away. Without so much as a how dee do, she asked, “Are you a vegetarian?” ‘I’m thinking about it,’ I said, a little taken aback, ‘since I’m just recovering from food poisoning from eating tainted chicken.’

Ok, Ok, I get it, I thought. Taking my silence as an opening, she then blurted out: “I’m the Buddha,” to which I also didn’t respond. But I must have made an appropriately skeptical face, because she instantly said, “I’m not crazy.”

She went on to tell me her story. On the dock to board a ship to escape Communist China during the Cultural Revolution, she got cold feet. A hand pushed her and she stumbled forward. Looking around, no one was there.

‘So what do you mean?’ I asked. In broken English, she replied, “the Buddha spirit flows through me.”

“My family had me institutionalized,” she added, “but it was a very wrong thing to do. I’ve forgiven them though.”

She then began to speak about Jesus. Not the Jesus the Church programs children into growing up Catholic. This sounded like a flesh and blood Jesus, for whom the cornerstone of right living was forgiveness.

It’s strange how there are definite junctures in your life, where you can see, even at the time, a definite change in direction.

That day I lost all urge to eat flesh of any kind (only when I see someone eating salmon am I tempted). There are three ways to become a vegetarian as I see it: from the head–ethical veg-heads; from the heart–out of pity; or from the gut–the hard-learners like myself.

More than a dietary change, and turning point in my relationship to animals however, the Buddha-channeling Chinese woman gave me a completely different insight into Jesus.

I’m certainly no believer, and still feel the Catholic Church is an abomination, and that Jesus’ mission failed. But in an ironic and unlikely way, a Buddhist from Communist China reconnected me with the true in the Western tradition.

Amidst the dregs and dross, chaos and collapse of Western civilization, what is that trueness?

As a child I was fascinated, like many Catholic kids, with the story about St. Francis of Assisi and his relationship to animals. He’s the saint that has statues of him all over the Western world of birds landing on him. When I left the corrupt Church at 17, I thought such stories about the saints were fictions, apocryphal myths to hoodwink and hook children.

But having had a number of such experiences, which began 20 years ago with birds and squirrels gathering around one while in a meditative state (after which I asked if I should become a vegetarian), I’m now sure there’s something to them. 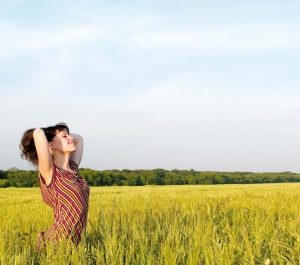 Joan of Arc, whose life raises uncomfortable questions in an increasingly comfortable scientific age, has been in the news again lately. Born 600 years ago, she heard voices for three years instructing her to “proclaim herself the virgin warrior sent by God to deliver France from her enemies,” according to a present-day biographer.

In our time, she’d be diagnosed as a schizophrenic by a psychological industry that’s helping fewer and fewer people, while pushing anti-depressants on top of anti-depressants for legions of individuals suffering from an undiagnosed cultural malady and malevolence.

There are dimensions beyond what we know, or think we know. Even physicists now routinely speak of a ‘multi-dimensional multiverse.’ Do once corporeal beings–complete or partial, illumined or recycled, emanating from what people used to call heaven or hell–exist in these other dimensions?

I don’t believe in the supernatural; to my mind the supernatural is simply a sloppy term for that which we don’t understand or as yet have a scientific explanation. Not that science is the final arbiter of reality and truth. But any vision of reality that fails to hold up to scientific scrutiny doesn’t hold water in our age.

We certainly don’t know what happens when we die. The hard atheist’s position (that this is it, and that the universe is nothing but energy, matter, and chance) is untenable. My own view is that “reincarnation is a fact but not the truth.” Meaning? End the recycling of non-learning, and learn; then incarnate, rather than keep reincarnating.

Is that what Joan of Arc’s angels, and all ‘angels’ are—illumined human beings in another dimension who have completed the journey? I don’t hear them, but I don’t dismiss the possibility that others have, and do, either.

Life now has but one commandment: Love, and be happy.