The Tecnológico de Costa Rica (TEC) was integrated as a member of the Local Committee for the Interurban Biological Corridor Río Torres Biosphere Reserve (CBIRT-RB), made up of various civil, governmental and academic organizations, as well as private companies and representatives of the municipalities through which this river runs.

This Corridor has a length of 26 kilometers, an area of ​​almost 54 square kilometers and involves 18 districts of the cantons of San José, Goicoechea, Montes de Oca and Tibás. The river begins at Rancho Redondo de Goicoechea and ends at the Electriona Hydroelectric Plant in Pavas de San José.

The initiative aims to create interconnections between the green and wooded areas of the Torres river micro-basin so that the flora and fauna species expand their mobility and there is a greater genetic exchange.

According to Beatriz Fernández, coordinator of the Local Committee, this will bring many benefits, both to the forest remnants and to the cities installed around the river. Among others, it mentions climate regulation, water quality, soil enrichment and landscape value.

“We are working on a process to consolidate a public-private alliance, known as the “Pact for the Torres” including strategic organizations that have the capacity to directly influence the micro-basin with their resources and regulations,” said Fernández.

The TEC is part of this alliance that already has 35 associates, according to data from “Biodiver_City San José”, a cooperation project between the governments of Germany and Costa Rica that is closely accompanying the development of the Interurban Biological Corridors of the Torres and María Aguilar rivers.

Maike Potthast, director of the “Biodiver_City project”, explains that it works with all the entities involved in the creation of capacities and tools that help them generate urban planning and development in the Greater Metropolitan Area, from the potentialization of the benefits they provide for urban ecosystems and green areas within the city for the physical and mental well-being of the population.

“For this purpose the project pursues several measures. One of them is the creation of a competitive fund to finance green urban projects. There is already an amount contributed by the “Biodiver_City” project and by “Fundecooperación” with which the “Ciudad Verde” Fund. The idea is that this Fund is maintained over time to finance medium and long-term projects,” explained Potthast. 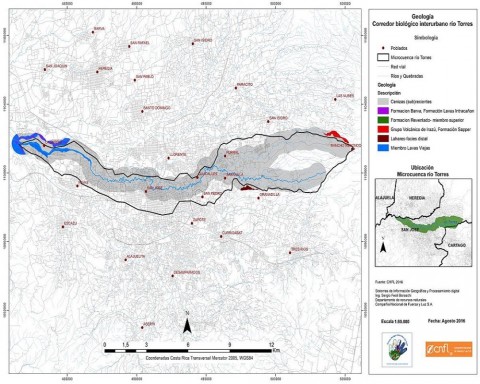 For Katiana Murillo, coordinator of the Communication Network on Climate Change for Latin America, biological corridors are of vital importance for the conservation of biodiversity because wildlife moves and migrates from one place to another.

“In the midst of all the threats that are around, such as land use change, habitat destruction and hunting, it is very beneficial, not only that there is a protected areas of land, but also a corridor that connects different areas, so that wildlife is safer, has better living conditions and there is a greater genetic flow between species”, she highlighted.

Murillo gives the example of the Quetzal, a bird in danger of extinction that makes altitudinal migrations in search of food. In these migrations to the lowlands it tends to be very vulnerable because it must leave protected areas. Hence the importance of the existence of biological corridors that protects it in this migration.

Like the Quetzal in Cerro de la Muerte, there are hundreds of animal and plant species that live in the micro-basin of the Torres River that need to recover the living conditions that they once had, when the first inhabitants of the urban area of ​​San José could still bathe in its waters.

In this sense, Potthast mentions that in cities it becomes even more important to implement strategies to increase the extension of biological corridors and recover their functionality, since the remnants of natural ecosystems are very few and have a reduced ecological quality.

According to Fernández, the Tecnológico de Costa Rica has contributed to the five-year strategic planning process that will set the route to follow until 2025. “In addition, the Tecnológico offered to develop the virtual training modules project, providing support personnel, physical space and recording resources with the support of its Institutional Unit for Environmental Management and Occupational Safety. These training modules will also serve other interurban biological corridors throughout the country,” she emphasized.

For his part, Potthast mentioned that the Technological can enrich the strategic planning and territory management processes with scientific data and knowledge, as well as provide a solid platform for the implementation of change projects in the territory.

“The TEC, from its role and experience in research and training of high-level professionals, can act as a multiplier agent of good practices and lessons learned and, in this way, contribute to the scalability of innovative approaches, oriented to urban development based on the benefits provided by ecosystems in the cities of the country”, he stressed.

This link between Tecnológico de Costa Rica and the Río Torres Biosphere Reserve Interurban Biological Corridor adds to the institutional effort to develop internal biological corridors in the Central Cartago Technological Campus and in the San Carlos Local Technological Campus, which are related to forested and green areas beyond their limits.

As Fernández explains, the changes will only be seen when each person who lives or works within the Torres River micro-basin assumes a lifestyle committed to the environment. Among the individual actions that it suggests, it stands out: knowing the benefits of a biological corridor, supporting organic agriculture, saving water, separating waste and supporting ecological initiatives.

“Only education and information can make us sensitive to making important changes in our behavior and in our daily routines. This type of Pandemic could be better exploited with good campaigns to “green” and “blue” our houses, neighborhoods, cities, companies, transport and offices. The subject is broad and the important thing is to start now”, he remarked.

There are committed, disciplined people, focused on contributing through various areas, many of them inspire and motivate us to...
Science & Technology

What is the Best Way to Detect a Rotator Cuff Injury?

According to a UN Report, Half of the World’s Population Is Highly Vulnerable to Climate Change

Ticos Contribute to Making this Planet a More Humane Place