In a blink of an eye, the life of this Tico athlete would change forever. Since Sherman Guity suffered a spectacular traffic accident. In the middle of this tragedy, the only way to save his life was to amputate his left foot. This fact undoubtedly threatened directly to end his sports career forever. But his faith, conviction, and desire, today have allowed him to overcome this condition and this character integrity has made him the fastest Paralympic runner in the world. 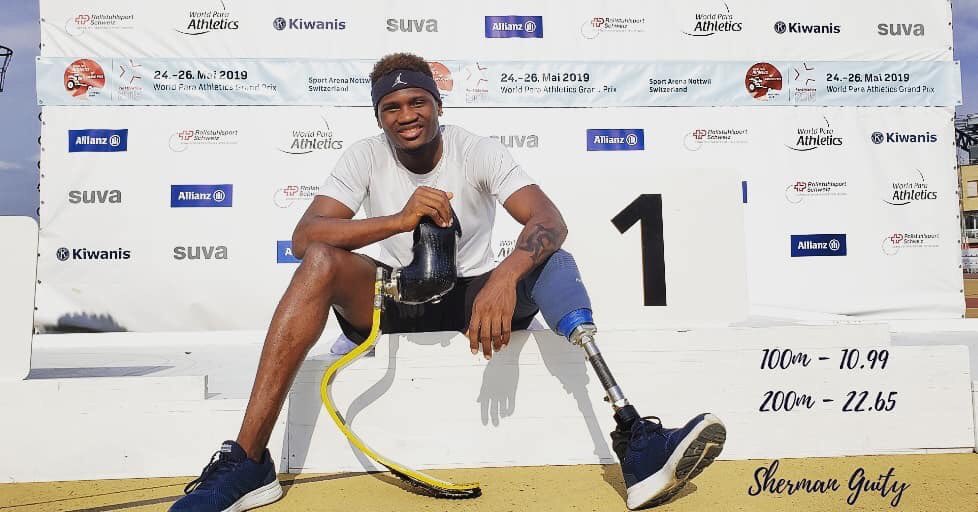 Sherman Guity, proudly Costa Rican, today holds the best records of the season in relation to the 100 and 200 meters dash, in the T64 track and field category. These figures have been achieved despite the accident he went through approximately 21 months ago.

A little more about the accident that would change Sherman Guity’s life.

This terrible accident occurred on August 25, 2017; Sherman was traveling to Alajuela through the General Cañas Highway, after the competition at the National Stadium when in an attempt to overtake another car he vehicle was collided by a bus. In this incident, the athlete was badly injured.

At that moment, Guity found himself baffled on the pavement, confused by the noise of the cars and the shouting of the people passing by. He could not move, he knew something was wrong. The beginning of a nightmare, with his career linked to the sport he loves so much now seemingly having come to an abrupt end by a whim of fate.

Sherman remembers that even while being in the hospital bed, he decided to make
this unwanted experience a new challenge: “I will be the best para-athlete that exists on the face of the earth”, while everyone around him could not believe what was happening in real time.

Twenty-one months later it seems that this determination for a second the life came fully through for this young Tico. Today he is more focused than ever to reach his goal, that is, fulfill the promise. And it has been consolidated this past Friday, achieving the best times of the season in the events of 100 and 200 meters dash of the T64 category. This during the Grand Prix for Athletics held in North wills Switzerland.

The proof. In the 200 meters race, Sherman managed to stop the clock at 22 seconds and 65 decimals (22:65), leaving aside his biggest opponent the American Henry Waterman (22:76). This feat earned him the best time of the tournament, i.e. the gold medal. A triumph for Costa Rica, which is bathed in gold. In addition to achieving the highest award of this competition (gold), all of Costa Rica celebrates today that one of our own despite the difficulties is crowned as the fastest, showing the world that your dreams can always be fulfilled; they are in your hands.

Guity himself shared his impressions after finishing the competition, and is very emphatic:  “I had a little stumble on the starting line but in the end, I managed to recover and make a good time improving my best time of the year”.

It should be noted that this gold medal is the second that this young athlete achieves this year. In this new stage of his career as a para-athlete Sherman has already obtained excellent results all around the world: two bronze medals in Arizona, United States; two gold medals in Barranquilla, Colombia; and one gold and one silver in Sao Paulo, Brazil.

It is worth mentioning that in this his first competition in Europe he managed to get two gold medals in Nottwil; Switzerland; that is why this young athlete today stands out as a source of great pride for the whole country. In this way Sherman Guity, is a name that resonates strongly throughout all our national territory, as an example to follow; his determination through the trials presented by fate have not been a stumbling block to say goodbye to his dreams, rather on the contrary these challenges that life has presented to him have been what has given an unbreakable impetus to move forward and fulfill his dreams, showing the whole world that limitations are in the mind and where there is a will there is  a way.