San Carlos is Home to Animals in Danger of Extinction

The Arrest of Antimonarchists Raises Criticism in the United Kingdom

This year’s Pride Parade will return to Costa Rica two years after a forced hiatus due to the pandemic. And it will do so with an agenda full of numerous activities for the whole family between June 24th and 26th.

This was announced Friday by the representatives of Pride Costa Rica at a conference in which they revealed that Paulina Rubio will close the Diversity March with a concert at the National Stadium.

Tickets to see the Mexican will be available starting next week on the eticket.cr site. Juan Carlos Carmona, one of the organizers said that the tickets will cost between ¢20,000 and just over ¢60,000. There will also be an area for no more than 200 people -super VIP- where tickets will cost approximately ¢120.000. 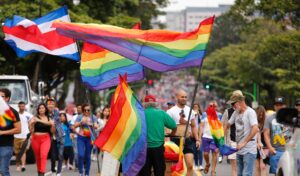 Carmona – who recently organized the two Christian Nodal concerts – also said that there will be liquor sales at Paulina Rubio’s activity. Half of the sports venue will be used.

High heels race and sale of souvenirs and food

Among the activities that will take place as part of the 13th edition of the Diversity March are:

Saturday 18th: Pride Awards at the Marriott Belén hotel. These are recognitions to various sectors that have worked on diversity and inclusion, including the media, companies, and individuals.

Friday 24th: A festival (Pride Fest) will start on the north esplanade of the National Stadium with stands that will sell souvenirs, food, and drinks (food trucks). There will also be carousels. Admission is free and will run until Sunday. Hours will be 10 a.m. to 10 p.m.

Saturday 25th: The diverse caravan from 6 p.m. will leave from different parks: Tibás, Guadalupe, and Desamparados, and will end at the National Stadium.

11 am. High heels race in the Central Park of San José.

12 m.d. Diversity March with the participation of floats and delegations from embassies, institutions, and national and foreign companies. This parade will change its route this year it will leave Central Park and will end in the redoubt of La Sabana.

4 pm The doors of the Stadium are open for the concert, which will have a poster of local artists and Rubio. But there will also be two drag performers: April Carrión and Pavel Arámbula (she imitates Thalía, Gloria Trevi, and Amanda Miguel, among others).

The national singers confirmed so far are: Xiomara, Rina Vega, Jecsionior, Jafet, Elena Umaña, Leo Jara, Gregory Cabrera and Karol Fonseca. For his part, Zorán will be the opening act for Paulina Rubio.

San Carlos is Home to Animals in Danger of Extinction

The Arrest of Antimonarchists Raises Criticism in the United Kingdom

Live Fully in the Most Spiritual Places of Costa Rica

Coldplay in Costa Rica: These are the Requirements to Enter the Two Concerts