Historic Preservation: The Rebirth of a Community

Your Child`s Pediatrician Should Be His First Best Friend

. Some babies have a hard time adjusting to routines like cutting their...
Read more

Stretching is an important component of our overall health because it is...
Read more

This Friday, May 22th, at a press conference in the Presidential Palace...
Read more
TCRN STAFFhttps://www.TheCostaRicaNews.com
Creating a Conscious alternative news network that we feel the world needs. Pura Vida!

Like many neighborhoods throughout the United States in the late 1950’s and 1960’s, Ybor City, the “Latin Quarter” of Tampa, Florida, fell prey to the SUBURBANIZATION of America.  Shortly after World War II, the masses started leaving the city centers across the country, and once vital communities like Ybor City with her spicy latin flavor, quickly became ghost towns. By the 1960’s Ybor City was consumed by drugs, over taken by low income tenant housing, and 90% of it’s business boarded up with no hope in site.  This was the trend throughout the 1950’s 60’s, 70’s and 80’s.  In the late1980’s the moon, not the sun, began to shine on Ybor City, when hundreds of bars and night clubs began to open, creating nightlife that rivaled that of Bourbon Street in New Orleans.  In 1991 the sun too shone when Ybor City was declared a National Historic Landmark District. 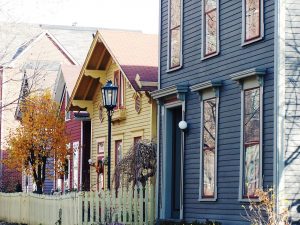 Why is Historic Preservation important?  Having specialized in Historic Restorations for 16 years, for me, the answers lie in the past.  I firmly believe if you know where you come from, you will have a clearer view of where you want to go.  A communities roots are vital for new growth, to create new uses for old buildings, and bring back the life that once existed there.  The roots of Ybor City are deep, starting in 1885 when Vincente Martinez Ybor, of Spain, via Cuba, set up the first cigar factory in the swamp just outside of Tampa, to create a thriving community of immigrants from Cuba, Spain, Italy, and Germany.  These different cultures would forever leave their mark and flavor on Tampa.  Social clubs, restaurants, bars, night clubs, casinos, and businesses sprouted up over night, and Ybor City was born!

When Historic Preservation takes root, it creates jobs, businesses, and pride in ownership.  It breaths new life into once abandoned buildings and homes.  Preservation gives a reason for being to old buildings.  There is a real draw to having a business in a historic building.  It creates interest, it shows integrity, a conversation piece.  For the local government, it generates a larger tax base, with higher property values, taxes collected on sales, and behind it all TOURISM.  For land owners, Historic Preservation offers many benefits including tax incentives, government grants, low interest or no interest loans, and pride of owning a well preserved property.

There are a few ways to preserve/restore historic properties.  Preservation Techniques “refers to methods of

maintaining the historical integrity of a building with limited alterations or additions; methods of stabilizing and preventing further decay”. In turn Restoration Techniques “denote rebuilding in order to achieve authenticity”.  Some believe in strictly maintaining a building with its original use, with no changes what so ever, only bring the property back to its original condition (Preservation Techniques) which is often practiced on historically significant buildings and homes such as Thomas Jeffersons, Monticello.  Others are more relaxed and believe in keeping all the major details of the interior/exterior but making the building adaptable to a more modern lifestyle, called Adaptive Use.  Adaptive Use is most common in residential areas and business districts/industrial areas using Restoration Techniques.  Overseeing it all are Architectural Review Boards. This panel of is typically elected locally, to ensure that Historic Districts are maintained and preserved with-in the confines of style and integrity and Design Criteria.

Historic Preservation in Costa Rica?  In my 7 years of traveling and 4 years of living in Costa Rica, I have found it unfortunate that more buildings and homes have not been restored or maintained.  Costa Rica is not as wealthy architecturally speaking as it’s neighbors to the north like Nicaragua or Guatemala, but Costa Rica has “little jewels” dotted through-out the country that deserve to be protected and polished so they can shine again!  I feel that a grass roots effort is needed to bring awareness to the value of these assets, so locals can embrace the changes need to create pride in preservation of one’s past.  The idea of ‘build it and they will come” also applies to preservation/restoration, “show them and they will follow suit”.  Yesterday, Marietta Arce and I took a drive to Rio Grande because we wanted to 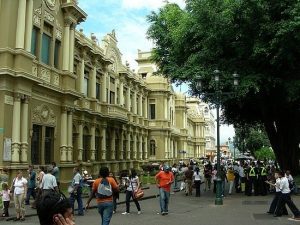 see the newly restored school there.  It looks amazing with a new roof, paint job, new tongue and groove ceilings, historically accurate windows and doors, traditional tile floors, and a restored school bell!  Now just imagine all the historic buildings in Atenas restored to this level!  What an example we could set for the nation.

We can all do our part, starting with a simple paint job, that will help preserve the integrity of a buildings exterior.  A few weeks ago, Gerardo and I painted the exterior of our office building and created a small ‘snowball” effect.  Now in a short 2 weeks we have brought seven business on board with the goal of painting our entire street in bright happy colors. Big projects are wonderful, but small steps are needed to begin the long tedious process of creating Historic Districts through out Costa Rica.  I am very proud of my home town Tampa, and in particular, Ybor City.  It took time, but once again Ybor City is the “crown jewel” of Tampa.  One by one we can make a change with something as simple as a paint job!  I hope to inspire as many people as possible to come together and make this possible for our beautiful “pueblo”, Atenas.  Together we are strong and can achieve anything.

Your Child`s Pediatrician Should Be His First Best Friend

. Some babies have a hard time adjusting to routines like cutting their...
Read more
Health

Stretching is an important component of our overall health because it is an instinctive act of the...
Read more
Environment

This Friday, May 22th, at a press conference in the Presidential Palace auditorium, on the occasion of...
Read more
News

With 30% of its territory protected by National Parks and Natural Reserves, Costa Rica is a country...
Read more
- Advertisement -