As the second largest province in Costa Rica, Alajuela is home to a wide variety of attractions, the province is the site of one of the most beautiful mountain ranges, the Cordillera Central, as well as several volcanic national parks. Travelers looking for a cultural experience can also enjoy this region, as it is home to the city of the same name Alajuela, a quiet metropolitan area located just outside of San Jose. Sitting on a gentle slope, Alajuela is warmer and smaller than its neighboring capital San Jose. 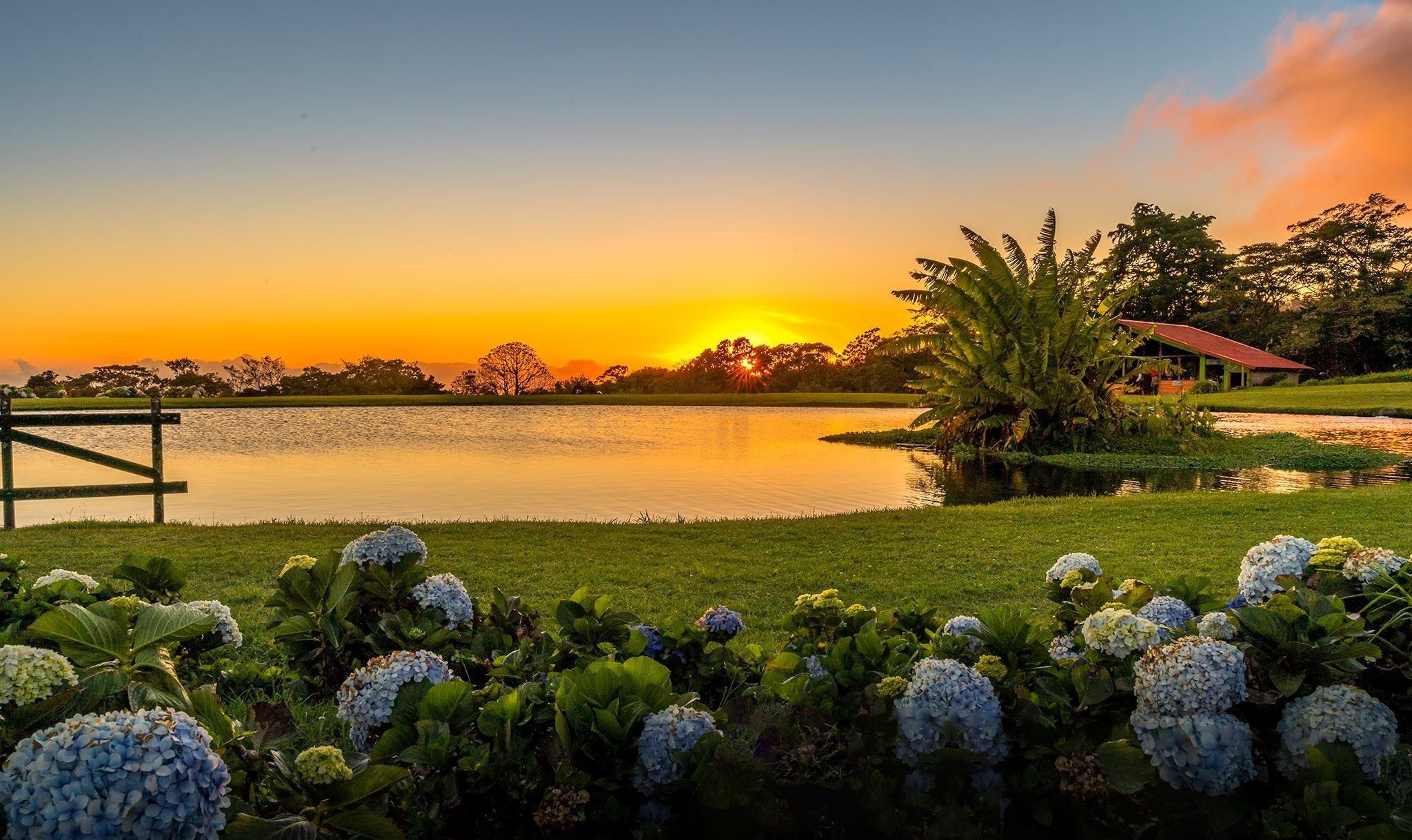 Originally the region was inhabited by indigenous peoples such as the Hebetares and the Votes. In the northern part by the Maluku, Tices, and Catalpas. In the sixteenth century, the Spaniards penetrated the Central Valley from Guanacaste, taking control of the Huerta Kingdom of the West. The natives who survived the epidemics and the conquest were transferred to Indian villages where they were exploited by the Spaniards.

In 1574 they established the “Pueblo de Indios de Santa Catalina” in what is now San Mateo, and in 1569 they created the town of “Brava Indians”. However, the clans to the north of the Central Volcanic Mountain Range resisted four more centuries, remaining free, in what the Spaniards until 1821 called “the plains of Tierra Adentro de Los Indios Bravos”.

The first time the name Alajuela was officially used was in the year 1657, it is cited in the testament of Juana de Vera and Sotomayor, who had “a place in the La Lajuela river with 400  horses and donkeys, 200 cows and 30 mules”. This was the first property registered in the province of Alajuela. The town was founded in 1782, when the Bishop of Nicaragua, Nicoya and Costa Rica, Esteban Lorenzo de Tristán, opened an oratory in “the hamlet of La Alajuela”, where he also established a quadrant for the peasants to group together.

In this way, the Spanish authorities founded Alajuela on October 12, 1782. In 1777 the families that lived in the area had to move to Villa Vieja de Heredia, which was the most suitable place at the time, so a church proposed by the parish priest Manuel López Del Corral was built, it was authorized by Bishop Esteban Tristan In 1790 and the parish was established.

The increasing population of mestizos in Cartago, in a context of land squattering, sought a future in the uninhabited Western Central Valley. This is how the towns of Heredia (1706) and San José (1736) were founded at the beginning of the 18th century. Later, in these towns, the population gradually increased and the lands were appropriate, so the landless peasants were forced to accept the status of tenant or laborer, or go out to colonize land further west of the Central Valley.

For this reason, the towns of Alajuela (1792) and Escazú (1793) were founded at the end of the 18th century. Eventually, the same thing happened in all the province of Alajuela, the landless peasants, on the rise, looking for a better future in the agricultural frontier of the Central Valley, colonizing Athens (1836), San Ramón (1854) and Grecia (1856). This process will continue to populate Naranjo, Zarcero, Quesada and the rest of the Province.

On February 16, 1921, Pope Benedict XV issued the decree “Praedecessorum”, by which he constituted the Republic of Costa Rica, ecclesiastically, in “Ecclesiastical Province”. This ecclesiastical province was going to be integrated by the Archdiocese of San José, the Diocese of Alajuela and the Apostolic Vicariate of Limón.

Alajuela is also known as the “Land of Mangos”. There is the Juan Santamaria International Airport, the most important in the country. The province occupies a national first place in the production of coffee and sugar cane. It also produces basic grains (rice, beans, and corn), fruits, legumes, tubers, and vegetables. It is part of the northern border at the height of Los Chiles.

What can you visit in Aláguelas?

The northern plains are irrigated by rivers that originate in the Central Volcanic Mountain Range and flow into the San Juan River or Lake Nicaragua. The most important are the basins of the San Carlos River, the Frío River, the Tres Amigos River, the Aguas Zarcas River, the San Lorenzo River, the Peñas Blancas River, the Arenal River, the Celeste River and the Cuarto River.

In the Province of Alajuela, there are several national parks (Poas Volcano, Arenal Volcano, Tenorio Volcano, Rincon de la Vieja Volcano, Juan Castro Blanco, and others), a national wildlife reserves (Caño Negro), and five protected areas and several forest reserves. To the west of Naranjo sits the Cerro Del Espíritu Santo where ruins of a Catholic monastery can be found at Cristo Rey.

Also in the province is the Animal Rescue Zoo Ave and the Juan Santamaría Historical and Cultural Museum, the only museum in the country specializing in the theme of the National Campaign of 1856-1857, which also exhibits works of art and crafts produced locally. It is located in the old Weapons Barracks of the city of Alajuela, a building of historical interest and national patrimony, built during the government of General Tomás Guardia Gutiérrez.

Other towns frequently visited in Alajuela are Zarcero, known for its park, where you can see sculptures made out of cypress, works of Evangelista Blanco Brenes, and Sarchí, site of manufacture of typical ox carts and crafts.

Some of the festivities and celebrations of the province of Alajuela are the Civic Festivities of Palmares (in January), the Cattle Exposition of San Carlos (April) and the Mango Festival in the city of Alajuela, which is known as “The City of Mangos “(in June).

The Arenal Volcano is an ideal place for any traveler. Its perfect symmetrical shape allows for a true spectacle worth seeing, while the history of the volcano has remained at the top of the lists of travelers for decades. Here you can go horseback riding, hiking and wildlife observation, among others. In addition, the area offers opportunities to go rafting down the Toro River, take a dip in one of the several natural hot springs, or maybe a trip through suspension bridges. For those less adventurous, you can also get an extensive view along a canapé tour over the treetops or take a horseback ride to the impressive La Fortuna Waterfall.

Sarchí, home of Costa Rican crafts, where wood comes to life, offers tourists a variety of “souvenirs” made with precious local woods. It is a place full of life, and here was born the polychrome cart, symbol of Costa Rican folklore. In Sorchí it is customary to make an annual cart parade with a great display of colors and pleasant memories. It is a must-visit place.

Zoo Ave. Home to a wide variety of felines, monkeys and other animals native to Costa Rica, it is known for hosting more than 100 different species of birds. This park is always in a hype, with plumage, scales, and pelts sharpened by the beautiful music of the unique sounds of each species. Zoo Ave is a great place to learn more about the native wildlife of Costa Rica, the main mission of the park is to raise animals that can be reintroduced into the natural environment. With such an important mission, you know that your admission fee is going towards something worthwhile.

Estado de Doka. Famous for its amazing coffee, the Doka Estate is a must for any caffeine fan. The coffee tour takes visitors through the process from seed to cup and teaches all coffee lovers about the whole process of their production. The family-owned coffee plantation was started in the 1940s, and the family has been perfecting ever since the art of making the perfect cup of coffee. At the end of the tour, visitors will have the opportunity to taste the rich mixtures they have seen on the tour.

Poas Volcano National Park. The Poas Volcano may not be as coveted a destination as the Arenal Volcano, but this imposing volcano is simply magnificent. Stretching to the skies at about 8,885 feet in height, about 2,708 meters. Poas is one of the most active volcanoes in the country. The main crater is more than a kilometer in diameter and descends about 600 meters. In addition to the area around the main crater, the park has dense vegetation and is an ideal place for travelers to take a look at the wildlife. There are also several different tropic zones, passing through clouds and the tropical mountain forest.