It is narrated as follows.

The story tells that the first proper masquerade was organized in the city of Cartago by Rafael “Lito” Valerín, on August 2, 1824, for the occasion of the celebrations in honor of the Virgin of the Angels (Virgen de Los Angeles), Patroness of Costa Rica, called affectionately “La Negrita” by the Costa Rican people.

Rafael Valerín, born in the neighborhood of Los Angeles in Cartago (also known as Puebla de Los Pardos, where according to legend the image of the Virgin of the Angels was found), was also a masquerade artisan, plumber, hatter, and watchmaker. In 1824 he dedicated himself to the elaboration of marionettes based on “jícaros”, as well as the manufacture of instruments such as guitars, violins, bandolinas, and marimbas.

The tradition narrates that once, in his work as a collaborator of the church of the Virgin of the Angels, he found an old trunk where some old masks of big heads of Spanish origin were kept. After closing the trunk out of fear, in another corner, he found another mask. Valerín interpreted that as a message from the Virgin, and taking the mask he had found, built a wooden frame where he placed the mask, giving rise to the first “Giganta”.

Its origin seems to be the product of colonial and Amerindian festive practices. It is related to the Spanish festival of giants and big heads, with influences from native indigenous communities, which gives its origin a pluricultural and syncretic character. The different characters represented in the masks receive locally the name of “mantudos” or clowns and are characterized by walking through the streets of the villages during the various popular or religious festivities and shifts, chasing the audience, dancing to the music of Maroon and accompanied by fireworks.

When was the celebration proclaimed in Costa Rica?

On October 31, 1996, on the initiative of the Aqueserrí Culture Committee, of the Aserrí canton and local artisans, a parade of traditional masquerades was organized along the main roads of the Josefino canton. The objective of this activity was to counteract other types of festivities alien to Costa Rican culture, such as the celebration of Halloween, as well as reinforcing the sense of identity of the people, taking advantage of the fact that it is common to represent different spectra of Costa Rican legends in the “mantudos”, called “espantos”(ghosts), such as La Llorona, Cadejos, Segua, witches and others.

The following year, in 1997, the government approved an executive decree prompted by the Ministry of Culture and Youth to establish the National Day of the Costa Rican Traditional Masquerade, which is held every October 31 since then.

The National Masquerade Day festivities include cultural and educational activities, elaboration and exhibition of masks, parades of the mantudos accompanied by folk music, preparation and sale of typical foods, pyrotechnic games and homages to outstanding masks. Each year, a National Encounter of the Traditional Costa Rican Masquerade is organized in one of the cantons of the country with the greatest masquerade tradition. In 1997, through Executive Decree No. 25724, the National Day of the Traditional Costa Rican Masquerade was declared on October 31.

Characters participating in the festival.

Giants: The giants are large masks, mounted on a structure made of bamboo or wire. Its appearance is pleasant and harmonious and can go in pairs. Particularly noteworthy is the “Giganta”, characterized by exaggerated movements, features, and prominent eyes, exuberant and elaborate hairstyle, and adorned with other accessories such as earrings and earrings.

The “Giganta” is considered one of the essential mantudos in any masquerade. It represents the wealthy Spanish ladies of the colony in Costa Rica. Another giant is the Governor, also called the Police, who parodies the political authorities. Some masquerades also include giants representing characters from Costa Rican legends, such as “Segua”, “Macha” or the Witch. The “Segua”, a specter of a woman with the head of a horse, is a very liked character to include in the masquerade.

The big heads: The big heads are “mantudos” of smaller size than the giants, whose main piece is placed directly on the user’s head, covering it completely. In general, they lack the frame that gives the giant its stature. While in the giant the upper extremities are elaborate designs attached to the trunk of the character, in the big head the user’s own limbs emerge through holes in the suit. Among the characters most often represented are the bigheaded, highlights the Devil (“Cuijén” or “Pisuicas”, in the Costa Rican colloquial language). This character is inspired by the “cagrúv”, the clever and ingenious imps of indigenous stories, rather than the biblical character.

Helmet Mask: Helmet masks are similar to big heads, with the difference that the mold for its manufacture is usually made up of a bucket or tub, or an inflated balloon, so that the mask has the respective geometric shape. The helmet masks have holes for the user’s eyes and nose carved directly on the mask, while the bighead, generally a little taller and more elaborate, has the hole at the level of the character’s neck. Helmet masks usually represent animals or characters of legend.

Apparatus: The apparatuses are “mantudos” that has a structure a little more complex, so that they can represent, for example, quadruped animals or mythological beings. The most represented character in the devices is the Bull. In the game of the “Diablitos de Boruca”, the Bull is a unique and essential element for the representation of the festivity. It is constituted by a mask carved in oak wood, which carries real horns of beef so that it recalls the head of a bull, which is placed on a bamboo structure covered with bags of “gangoche”, on which fire artifice are placed.

Masks: Masks that cover only the face, and sometimes carry a piece of cloth that covers the rest of the user’s head. They represent goblins, dwarfs, witches, devils, legend characters such as La Llorona or Tulevieja, animals, birds and diverse characters. Like the bigheads and helmet masks, they usually wear bullwhips or bladders.

What are the maroons?

They are small bands of amateur musicians who usually accompany the masquerade as they parade through the streets during the festivities. In each block, the Maroons play fanfare music so that the masks dance while the audience surrounds them. Maroons arise from the municipal or philharmonic bands that used to animate the civic or patronal festivities in each canton. They were mainly made up of wind instruments or percussion, with a characteristic form or style of music. They are called maroons in relation to the term “Cimarron”, in reference to some feral animals called like that, the wild cats that make noise when passing through the roofs, or the herds of wild cattle, precisely because of the scandal that the maroon makes in its wake through the village.

How it is celebrated and its purpose?

The masquerades barveñas are recognized throughout the national territory and periodical meetings are held in the park to entertain the parties and enjoy the masquerade tradition. As part of the party, it is common to perform the traditional “pesetero” bingo and the game of “tablitas”, two activities of yesteryears that are still present at Barva’s patron saint festivities.

The tradition is to dance and chase people armed with pig bladders or water-filled brines. They have more than 70 years of having incorporated the masquerades to this celebration. 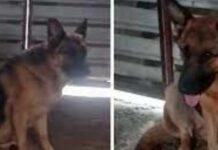 Joha, the Heroic Dog Who Saved a Group of Workers in Cartago, Costa Rica 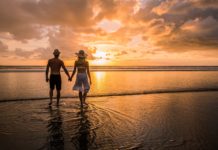 7 Places to See the Best Sunsets in Costa Rica 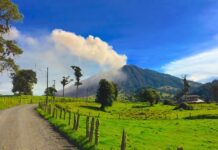