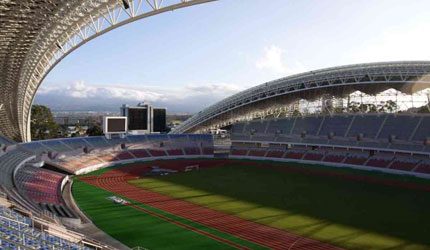 Costa Rica’s new National Stadium opens it’s doors to the public this Saturday, kicking off the inauguration with a soccer match between Costa Rica and China. The following is a list of the first events scheduled in the new stadium.

Saturday, March 26, is the opening of the new national stadium in San Jose. The highlight of the inauguration will undoubtedly be the Costa Rica national soccer team’s match against China. The opening event also includes the official “acts of protocol,” a ceremony where specially chosen Costa Rican athletes receive recognition for outstanding performances, followed by fireworks. Teletica will be covering the inauguration live on channel 7.

On Tuesday, March 29, you once again have a valid excuse to paint your face in red, blue, and white colors. Costa Rica’s national soccer team will face one of the giants of international soccer, Argentina, with the world’s best soccer player, Lionel Messi, on the team in a friendly match.

March 31 is boxing night at the new stadium, which includes seven matches and three World Championships. Closing the night will be Costa Rica’s own boxing heroine, Hannah Gabriels, who will defend her World Championship title.

Saturday, April 2, is live and loud music night with all the best musicians from Costa Rica.

International superstar Shakira is in town on April 10. The Colombian pop singer performs her repertoire at the stadium on a night that guarantees to be vibrant, colorful and festive.

More information, including links to purchase tickets, can be found on Estadio Nacional’s new website: http://www.nuevoestadionacional.com/