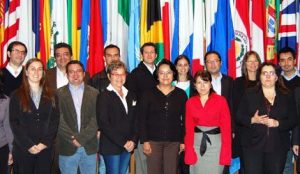 Costa Rica and Brazil took the first steps to reach a bilateral agreement that would allow both nations to mutual cooperation in the development of nanotechnology, the space industry and in other areas of mutual interest.

The first contacts between both nations were Joshua and Keilor Fumero Rojas, Director of Innovation and Technology Transfer and Scientific Adviser to the Ministry of Science and Technology (MICIT for their initials in Spanish), respectively. Fumero and Rojas participated in the first edition of the School of Political Science Managers, Technology and Innovation, held at the headquarters of the Economic Commission for Latin America (CEPAL for their initials in Spanish) in Santiago de Chile. The eventual cooperation agreement with Brazil arose in the context of the training conducted in the field of international cooperation. The talks progressed to the point that the Costa Rican and Brazilian delegations proposed text drafted a basis for cooperation.

As part of the training, representatives of MICIT also managed to establish a strategic network of contacts, bringing together the ministries and agencies of the countries represented.

Attendance at the first edition of the School of Policy Productivity in Science, Technology and Innovation, allowed MICIT officials will return to Costa Rica with important knowledge that will assist the portfolios have different innovation management models already used in other countries.

That knowledge will launch a proposal for a system of innovation agents for Costa Rica, a task which is among the priorities of MICIT.

As part of the training, representatives of MICIT could share with the updated international expert on the state of the instruments of science and technology policy in the region. It also acquired new knowledge in strategic planning of public policies, intellectual property, models of knowledge and technology transfer, innovation management and methodologies for evaluating impact of programs in technology, science and innovation. Apart from Costa Rica and Brazil, training representatives from Argentina, Mexico, Chile, Uruguay, Ecuador, Cuba and Nicaragua also participated.

When the Amazon Burns, the Rest of the World Alarms!