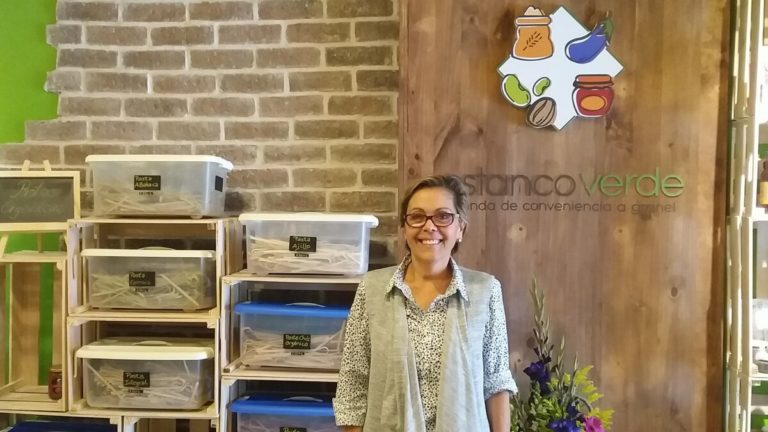 “I bring my little pots and they do what the product weighs on you. I thought it was time to make the change, not to use more plastic or buy in the big stores”, says Vivian Umaña.

She changed her consumption habits a few months ago and now buys grains, seeds, and pasta in bulk. She does it at El Tramito, a store located in Tres Ríos (La Unión) and of which she is a frequent customer.

She no longer uses plastic bags or buys large quantities that he previously wasted. Now she does, as she said, in her own containers and with the necessary measures.

Although El Tramito opened its doors n June 2018, the story behind the trade dates back to the 1950s, when Rafael Garita founded the San Rafael N ° 2 section, in San José’s Central Market.

Almost 70 years later, it was his granddaughters, Roxana and Carmen, who brought the tradition of selling in bulk to the residents of Tres Ríos, and with an additional component: environmental awareness. In fact, in El Tramito, there are only 3 ways to buy: carrying your own containers, with paper bags, or cloth bags.

Although bulk sales looked like an old-fashioned business, typical of the provincial or older public markets, today they have become a fresh-faced trade that responds to new environmental requirements.

El Tramito is not the only one of its kind: there are also other shops in Curridabat and Escazú, such as El Granero or Estanco Verde. There are also cleaning products, such as the one started by Florex in June of this year.

Bulk sales are trending again, but this time with a view to reducing food waste and disposable plastic.

“For me it is to return to the essence, and also the decrease of garbage since I buy in El Tramito is abysmal, I decreased all the bags of the products that I am no longer buying”, said Umaña.

This business is kept

Although bulk sales did not disappear in the country, the entrance of large supermarket chains modified the way Costa Ricans bought, and directly affected that business.

This was stated by Dagoberto Campos, who works alongside the Alameda market, in Alajuela Commercial, which is over 50 years old and has not left the sale in bulk. Campos has been working there for 4 decades.

Despite the affectation, he said that they still keep their loyal customers, and have attracted younger audiences. “There are families that grandparents came to buy and now grandchildren come, for example”, he said.

Although the trend of a few decades ago forced them to switch to plastic bags many years ago, Campos said they are returning to paper bags with more force. “Here we have always worked paper bags, it costs nothing to pack in that bag and that will happen nationwide. You have to adapt to the system, it is reuniting with the past”, said Campos.

The clerk said that before the plastic bags became the most used material, Comercial Alajuela only sold in paper bags or sacks. For this reason, he said, he does not see more difficulty in adopting more sustainable practices with the environment, just as it was decades ago.

El Tramito is a new concept, more modern and in keeping with the time, but it is a business of yesteryear. The San Rafael N ° 2 and Comercial Alajuela section, meanwhile, survive with the same characteristics of decades ago, but both have walked towards the goal of being more environmental.

“In the we gave people reusable bags while we were getting comfortable; now here in the market people start arriving with their own containers and cloth bags”, Garita said. “Here the products were already weighed in plastic but now we have many things in large containers because people bring their own bags”, he added.

In addition, according to Garita, the changes they have implemented in the stretch of the market and in Tres Ríos, such as the decrease in plastic bags, have also permeated their suppliers, who are also starting to use other materials.

Bulk sales are not the only business that seems to be resurfacing from the past and catching a younger clientele. Milkmen, those that go from door to door, have also sneaked into the spiral of good environmental practices that Costa Ricans try to implement.

Manuel Cordero already looks over 60 years old, and of those, he has 18 to buy Jonathan 6 bottles of milk a week. It is his official milkman, who goes to his door in a pick-up vehicle also with eggs, bread, and custard.

But the 6 bottles are not plastic, glass, or cardboard. Don Manuel has his own container that he fills on Mondays, Thursdays, and Fridays, always at 9 am. “I do not remember going to the grocery store or a supermarket to buy a box of milk. We save all those disposable containers”, said Cordero.

Gabriela González lives near Don Manuel, used to buying the milk boxes in the supermarket. However, in an effort to contribute to the protection of the environment, she said she was willing to transform her consumption habits and start consuming the product as her neighbor does.

But not only does the environment benefit from the proliferation of bulk sales or purchase from local dairy farmers.

The products that use both El Tramito, and Comercial Alajuela and the San Rafael N ° 2 section are produced on Costa Rican soil, for example. With this, the local economy is directly supported.

El Tramito sells, for example, peppers produced in Sarapiquí; Alajuela, beans in Pueblo Viejo de Nicoya, and rice from Guanacaste, Santa Cruz, and Upala. Turmeric and ginger from the northern zone, Guápiles cocoa, Upala beans … These are other products that reach these places of in bulk.

Likewise, with this type of business, consumers buy the amounts appropriate to their economic and family characteristics. Therefore, the waste of food and money is reduced.