Little was known about these lands and their peasant occupants, but then the press started to report on evictions and protests by residents of these remote lands across the Térraba river bridge in southern Costa Rica.

Why do a small group of peasant families claim the rural Palmar Sur lands?

The story began 90 years ago when the transnational United Fruit Company leased land from the Costa Rican government for banana plantations in Palmar Sur. Sixty years later, after a long crisis in the banana sector, the company left the country and signed a settlement with the government. But, instead of reclaiming the land, the state allowed the banana company to transfer the farmlands into the privately held COOPALCA del Sur company. 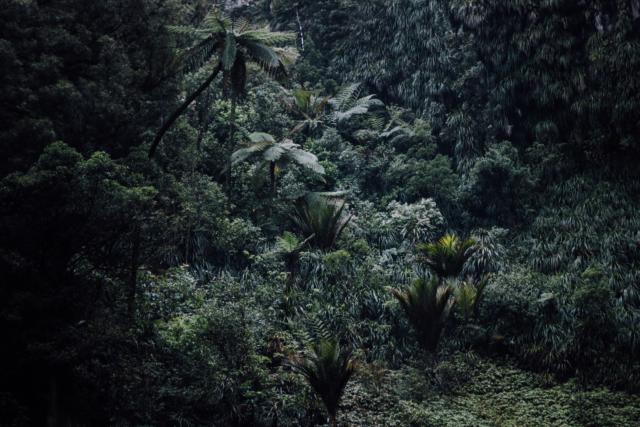 “I worked for nine years for Mr. Echeverría on his banana farm,” said Rosa María Vega in an interview with The Costa Rica News. “He sometimes didn’t pay for our vacations, didn’t pay for our Christmas bonus, and often paid us half of our salary or none at all; and we continued like that for quite some time until the day came that we decided to speak up, because the situation was unbearable. He took the decision to leave, abandoning the workers, and he never showed up anymore. We called him to reach an agreement and he never showed up. So we decided to take over the lands in order to work because we had no other means to make a living besides living off the land. He was responsible for speaking badly about us to the palm plantations and other people who offered jobs in the area saying we were strikers,” continued Vega.

In 2011, Echeverría’s contract expired. However, the businessman claims he still has legal rights over the land, and has repeatedly requested the Costa Rican government remove the peasant families.

“What I start to think is, how can a man with so many possibilities, who has so much money, has so many debts? How is it possible that there is no justice? What is he going to do, since this is not his land? Why is he fighting for these lands if they are not his, this is owned by the state,” continued Vega.

Finally, in 2014, after several years during which the threat of eviction did not materialize, the Costa Rican Attorney General’s office signed an agreement with Echeverría ordering the eviction of the peasant families, which has been questioned by the families, community and civic organizations, as well as some mainstream media, because Echeverría apparently owes very large sums of money to several state institutions, such as the social security fund (CCSS, in Spanish), the social protection agency (IMAS, in Spanish), as well as the now defunct Banco Anglo, as well as national development and family welfare fund (FODESAF).

“We have such a mediocre attorney, that even before the case against Echeverría made it to court, our lawyer rushed to sign a conciliation with him that is contradictory: it is based on the fact that Echeverría had a lease on the lands that expired in 2011, and the second fact, that he owes money to the CCSS.  Article 74 of the civil code which established the CCSS is very clear: You can’t sign contracts with the state if you owe money to the social security fund,” said Daniel Villalobos, a Palmar Sur peasant leader, in an interview.

On July 30, 2014, public safety officers proceeded to evict about 100 families from the property. Without anywhere to go, they remained for 17 days on the Térraba river bridge. “That day, the officers came without previous notice at 5:00 a.m. and told us to empty the houses because this was an eviction. Everybody was crying, it was raining and we did not even have water to drink, no toilets and all our belongings were on the floor,” recalls Vega.

Another peasant, Evelyn Saborío, said in a live interview that, “During the eviction, we had rice crops, and they started cutting down all the other crops. Fortunately, since our parcel is well inside the property, they couldn’t reach there due to all the upheaval. We got eight sacks of rice out of there, which is the rice we are using to eat today. By selling watermelon, we make some money to support our family.”

On February 2016, after a new eviction threat, the peasants began protesting again over the bridge, and applied to the Costa Rican Constitutional Court to stop their eviction from the lands. “Early in the morning we were sitting on one side of the bridge, when we stopped seeing the cars moving around; then 54 anti riot officers appeared, and squared off against 45 of us. All we had was a Costa Rican flag with a stick that they grabbed and threw into the river. It was very sad because we did not even have a stick or rocks to defend ourselves, but they were heavily armed, beating me and other females in the group,” recalls Xenia Ávila, a Palmar Sur resident. “They arrested seven of our community, and some others were beaten by the police officers,” said Villalobos. 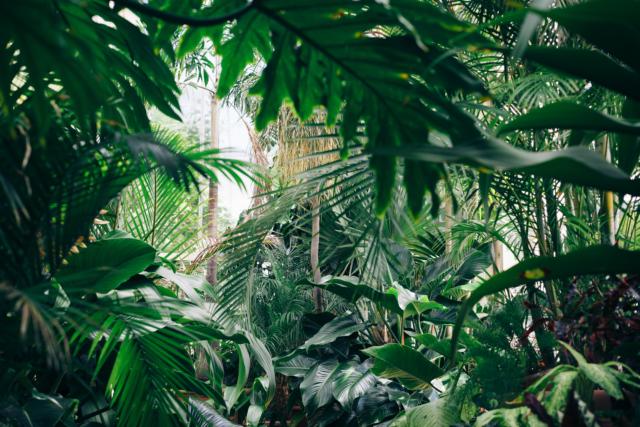 Finally, on March 1, 2016, the families welcomed the news that the agrarian court had approved their request for an injunction against the Térraba and Chánguina banana companies. With this, the next planned eviction was temporarily suspended. Now, the court will have the final word to determine who has rights to these lands.

“We have a lot of hope, if they remove the eviction order, this will end the problems we are facing, and we can produce a lot better off the land,” said Saborío. “We won’t stop fighting until we have the property titles in hand, and on that day we are going to celebrate.”

Before this conflict opened up between peasant families and a businessman, there was always a big unresolved doubt as to who really had legal rights over these lands, according to Gloriana Martínez, a researcher at the Social Investigations Institute at the University of Costa Rica.

“This conflict has been going on for many years, and has to do also with legal ambiguities regarding tenure and legal rights over these lands – the Palmar Sur lands. There is one continuous thread in this picture, which is that since the 80s there have been people occupying, working, living off the land, and caring for the land. These are the peasant families that previously worked for the banana company. So the legitimate right of the lands really belongs to the people that is there working and living off the land, and well, due to the lots of legal misunderstandings and shortfalls regarding the status of these lands, there has been much confusion, but the ones that really have legitimate right of possession of the land are the peasants,” explained Martínez.

Unfortunately, legislation on agrarian matters in Costa Rica is ambiguous and weak, “From the moment a banana plantation is installed, there is a legal shortcoming. Because of this, there is complacency by the government in the face of the vulnerability of these peasant families who have been occupying these lands for years. There is also complacency from the state towards the businessman, because the contract expired in 2011, but he keeps fighting for the lands. There were also problems with the contract given to COOPALCA del Sur, which only fuels the tension,” continued Martínez.

The government has sent representative to meet with the families during the conflictive years. The presidency proposed giving them little houses in a sector of Palmar Sur, but the peasants are demanding property titles over the lands where they live and grow their food. “The government proposed, if left the property, to give us a little house somewhere else. Nineteen of our community members took advantage of that benefit because they wanted to have a house, but not to live off the land. We stayed here because our goal is to live off the land and work,” continued Villalobos.

“The government provided houses on plots that were too little and that had no water for them to carry out their daily (agricultural) activities. These people were not even asking the government to give them anything, all they want is to have a concession on the land so they can pay for it at a cost price and live quietly doing what they know best, that is to live off the land,” explained Villalobos. 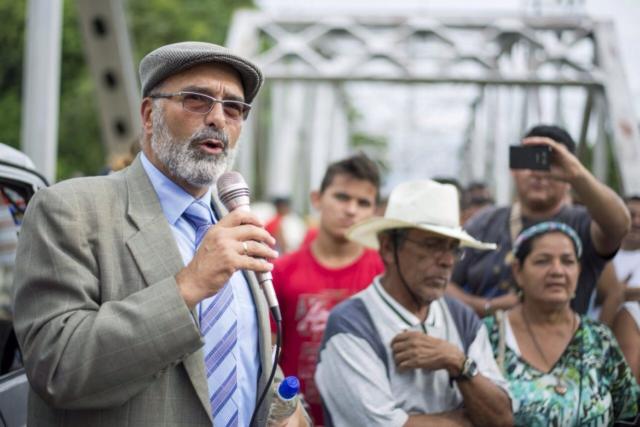 Xinia Ávila, one of the peasants, delivered a powerful message to the President of Costa Rica, Luis Guillermo Solís, at a march in San José, when she said, “Mr. President, you want to screw us. You send these anti-riot officers to attack us, while the food on your dish on your table every day is produced by us peasants. You are not considering that if we peasants cease to exist, you will lack food to bring to your table for your family. Please value who we are as peasants, and help us and support us.”

The government attacks on these people who have lived on these lands for more than thirty years were broadcast by the Costa Rican mainstream media – it involved the destruction of their houses, their crops, and affected women and children.

Peasant leaders engaged in peaceful protests were threatened by police who said they would jail the leaders. The government remains silent about taking away the peasants’ lands and have looked the other way when the businessman says he is the owner. 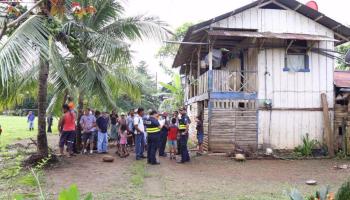 According to Martínez, “The traditional approach of the mainstream media is to report on incidents such as riots, street blockage, evictments, burned houses, etc. But they do not dig deep into the situation that is going on not only in Palmar Sur, but also in Sierpe, as to how the situation is creating instability for many peasants lives.”

The peasants who lay claim to the lands claim that Echeverría owes with them for deductions he made from their salaries to the tune of over 359 million colones (about US$658K).

Echeverría is president of Motores Británicos, an importer and distributor of luxury cars, according to the Costa Rican media.

In 2006, a few months after Oscar Arias came to power, British Motors donated three luxury vehicles to the executive office that were used to transport the president and his entourage.

In 2013, during the Laura Chinchilla administration, British Motors upgraded one of the three cars, and the older vehicles continued to be used by Luis Guillermo Solís, who took office after Chinchilla.

Óscar Echeverría has remained invisible during the conflict, and has not made statements to the press.