What makes the Corcovado National Park so special?

The Corcovado National Park, located on the Osa Peninsula, is the ideal natural passage for the study of tropical ecosystems, a magnificent living laboratory and an important piece of the system of national parks and biological reserves of Costa Rica. This park protects the largest primary forest in the American Pacific and a humid tropical forest, of considerable sizes, like few others in the world. The extension and richness of its habitats (from 25 to 30 ecosystems) allow it to support important populations of flora and fauna, endemic as well as endangered. Corcovado has an important role in the protection of fauna (like the lizard, the crocodile, harpy eagle), flora, tributaries and archaeological pieces. In the park, rivers are born and open, allowing them to be protected and preserve their purity. 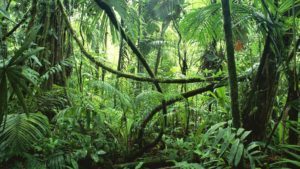 Its extraordinary diversity is due to the fact that the park is located in a biological corridor of flora and fauna that connects the north and south of the continent; likewise, its climate of high rainfall allows the proliferation of basins and rivers resulting in a great variety of forests and ecosystems. There are also many waterfalls, especially one that measures 35 m. and it falls on the beach. Rests of indigenous presence have been found which is why it is also considered an archaeological site.

Appreciated by some of the most recognized magazines in the world!

The wonders of the Corcovado National Park in Costa Rica have been witnessed by countless visitors, researchers, and reporters. Recognized worldwide for its impressive biodiversity, Corcovado has been the subject of multiple articles and reports, appearing in internationally recognized digital and print publications affirming, again and again, the beauty of this Costa Rican reserve. 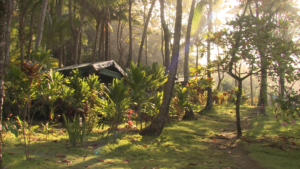 “4 years ago, I traveled to this very spot on vacation and was utterly amazed by the wealth of wildlife all around me. In my opinion, Osa represents the best of the best of Costa Rica. I’m not the only one who feels this way: National Geographic Traveler listed the Osa Peninsula as one of their Places of a Lifetime in their October 2009 issue”. Andrew Evans wrote this during his trip on board of the National Geographic Sea Lion where he recaps his visit to Costa Rica’s Corcovado National Park.
The National Geographic magazine, whose expertise on issues such as nature, biology, travel, and tourism is unquestionable, has also referred to Corcovado as “the most biologically intense place on Earth”.

The New York Times also published, both in its digital edition and in print, about the charms of the Corcovado National Park. It was the writer Amy Harmon who wrote about her visit to Costa Rica and her wonderful experiences knowing the natural and wild side of this country with her husband and daughter. The article “In Search of ‘Wild’ Costa Rica” tells his tour through the emblematic forests of Corcovado.

“Our guide, Nito Paniagua, who met us in Puerto Jiménez for the 15-minute charter flight, lost no time snagging us a spot on the tent platform at the station and heading out on a trail to the river. The park has just started requiring tourists to be accompanied by a guide, but in any case, we would have been lost without Nito’s 6 senses. He caught lizards and hung them from our ears, trained his scope on resplendent birds no one else could see and produced bats from furled-up leaves”. Wrote Amy Harmon in her article for The New York Times.

Reasons why you should visit Corcovado

Within the Corcovado National Park, you can admire the immense variety of wild animals that gather in this tropical paradise. The walks along the trails designed for visitors in the park are an unforgettable experience since the biodiversity of this space makes anyone fall in love. For bird lovers, the Corcovado is a unique place for bird watching. 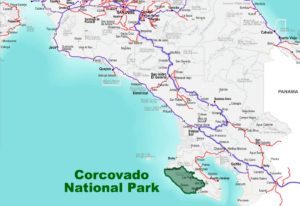 In the surrounding areas of the National Park visitors can perform unforgettable activities such as horseback riding and in the maritime areas can dive into the depths to dive with turtles, dolphins, fish of thousands of species, shapes, and colors and even for the most intrepid. Swimming with sharks is possible. You can also surf and kayaking from the sea, to see from another perspective those beautiful coasts. In addition, every year can be observed in winter whales in front of Isla del Caño, a show that demonstrates the indisputable beauty of Mother Nature.