They are the twelve groups of stars that form the farm of the celestial sphere through which the Sun transits, in a one-month journey through each constellation. Seen from Earth, they form the backdrop for the movement of the moon and the planets. Each constellation has been assigned a symbol and a name that corresponds to the figure they imaginary form in the sky.

The term zodiac comes from the Greek and means “animal wheel, where each of the zodiacal constellations represents an animal. Although each of the stories of Greek mythology that give rise to them, are many of them related to animals, there are some such as that of Libra or Gemini that are related more to characters from Greek mythology.

Currently there are thirteen constellations of the zodiac with the incorporation of Ophiuchus. This symbol is located between Scorpio and Aquarius. 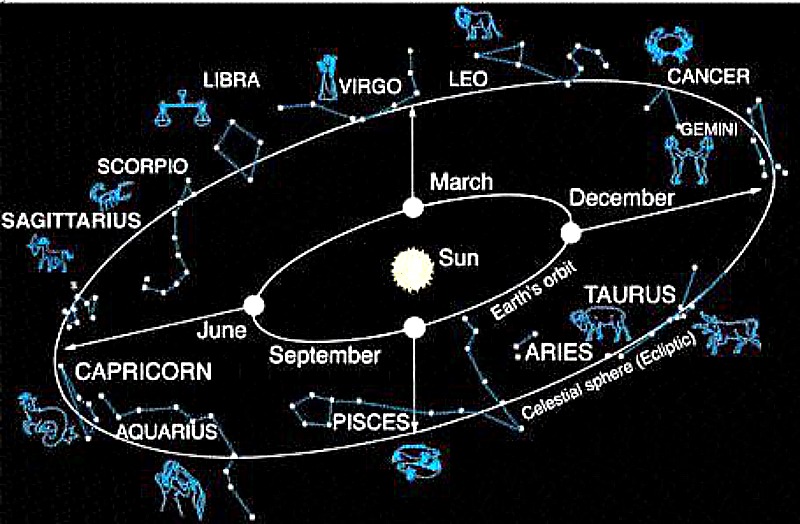 One of the first sciences that man has explored has been the study of the starry skies. Since the beginning of time, the heavenly bodies and their rhythmic and cyclical apparent movements have exerted a fascinating influence on the human spirit.

If we look at the distribution in the sky of the 2,500 stars visible to the naked eye on a clear night, we will notice that some of them appear to be grouped representing certain figures that are called constellations, a term that in Latin means “position of the stars”.

In reality, this grouping is only apparent, since, with the exception of some particular cases, the stars of a constellation are not physically connected or close to each other.

Although the origin of the practice of defining figures from the apparent position of the stars in the night sky is not exactly known, this practice must have started with the dawn of man.

The origin of the names of the constellations visible from the Northern Hemisphere comes from three different sources, although we owe it to the Greeks of the Hellenistic era for their complete assembly:

These constellations have not only reached us through Greek mythological stories, but if we know how to read symbolically in stories, traditions, images, books that reflect ancient wisdom, we can realize the importance of knowing how to read the language of the heavens to understand what happens on Earth.

Astrology is as exact a science as astronomy, provided that the observations are also exact, because without this condition one and the other science would be in error. Astrology is to astronomy as psychology is to physiology and in astrology as well as in psychology it is necessary to go beyond the visible world and enter the domains of transcendent spirit.

Astronomy and physiology are the bodies: astrology and psychology, the souls. The first few fall under the study of the bodily eyes; the second ones are more spiritual, but they are all exact sciences.

Every time we look up at the dark sky and we can see groups of stars that imaginatively form figures, we will be observing the so-called constellation.