The Turrialba Volcano of Costa Rica

Chirripó National Park Opened This Past Week, Welcoming Back All Hikers

The Turrialba Volcano was named after the region in which it is located in the Turrialba county, Cartago. The volcano is the second highest in Costa Rica with an altitude of 11,000 feet. It was originally named “Torre Alba” which translates to White Tower. This name came from the Spaniards who decided upon the name after seeing the columns of white smoke billowing from the volcano.

In 1955 the Turrialba National Park was founded to protect the beauty that surrounds the volcano. The 3,900 acre park includes hiking trails that provide incredible views of the surrounding rain and cloud forests. A variety of animals make their home in the park including 84 birds and 11 mammal species.

The Turrialba Volcano is active and its most recent eruption occurred on January 5th, 2010. This was actually the first eruption since 1866. The volcano has erupted several times during the 19th century releasing rapid flows of hot gas and rocks. The recent release of ash and gases caused an evacuation of the towns La Central and El Retiro. The volcano is monitored so people can be notified of danger. Thankfully though, I was at a safe distance while staying at the Turrialtico Lodge. To read more about my tours visit http://elizabethssecretgarden.blogspot.com/ 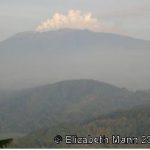 Chirripó National Park Opened This Past Week, Welcoming Back All Hikers

A group of tourists was surprised two days ago when they observed several killer whales hunting in the Pacific waters of Costa Rica. The...
Read more

Artificial reefs have become a key step towards the recovery of marine life in Costa Rica, thanks to their benefits for maintaining fish diversity,...
Read more

Costa Rica climbed in the Human Development Index (HDI) in 2020, after the UN for the first time incorporated criteria on environmental protection in...
Read more
- Advertisement -