For many people, no creature causes as much disgust and terror as snakes. Also known as ophidians, they are a family of carnivorous reptiles that have inhabited the Earth for several million years. So far more than 450 genera and 3460 species of them have been recorded. Except for the coldest regions of the planet, there are snakes everywhere. Brimming with biodiversity, Costa Rica harbors more than a fair share of the slithery critters. Figures vary but according to sources, there are 143 species of snakes in Costa Rica, of which only 23 are poisonous. 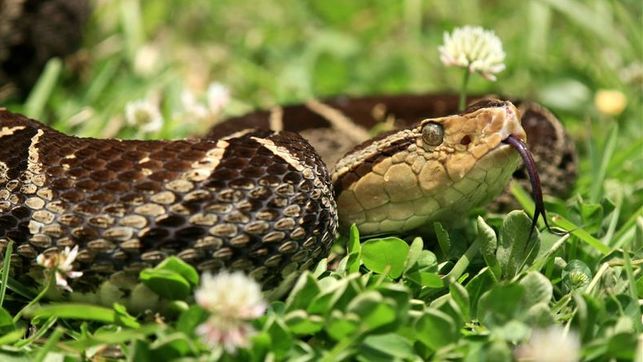 One of the latter is the fer-de-lance. It belongs to a ubiquitous family of pit vipers, whose habitat stretches from southern Mexico to northern South America. In Costa Rica, they can be found from the lowlands of both the Atlantic and Pacific coasts and up to  1,300 m in elevation. The original name comes from the French language and means lancehead, as they have a broad, flattened, triangular head. The Costa Rican fer-de-lance (Bothrops asper), is commonly known as terciopelo (“velvet”). Terciopelos go by many other names: barba amarilla, rabo amarillo (“yellow beard”, “yellow tail”) in Guatemala and Honduras, “nauyaca” in México, “taya equis” in Colombia and “mapanare” in Venezuela.

– Terciopelos are widely considered one of the most dangerous and poisonous snakes in Central America. They are responsible for about 50% of the accidents and ofidic deaths in Costa Rica. They also rank high among the most venomous in the world.

– Once it is injected the venom works both at the local level produces necrosis, edema, local bleeding, and very intense pain. On a systemic level, the toxins alter blood clotting, which leads to generalized bleeding, numbness, vomiting and eventually to death.

– Terciopelos are viviparous and very prolific. Their litters vary from fewer than 10 to larger than 100 little snakes at a time. Some say that the young terciopelos’ venom is more potent than the adults’ and, therefore, more lethal.

– The terciopelo is one of the largest snakes in the region  (second only to the notorious ox killer or “matabueyes”, from the genus Lachesis). Some vipers can reach up to 2.5 meters (8 feet) long. Females, which on average reach 1.85 meters (6 feet), are usually larger than the males.

– They are adaptable animals. According to their size and age, they eat small mammals, such as rats and mice,  insects, lizards, opossums, and birds.

– Terciopelos are most active at night and usually sleep during the day.

– ln Costa Rica terciopelos have almost no natural predators. The most frequent victims are campesinos and farmers that often kill snakes on sight. In their defense, it can be argued that along with herders and members of the indigenous populations, they take the brunt of the snake-related incidents in the country.

– Terciopelo vipers are extremely defensive (some would say they have an edgy disposition) and instead of trying to escape, they are very quick to bite when threatened or scared. This is one of the reasons why fer-de-lances pose an important threat to humans.

– Another reason is that due to their effective camouflage the animals are very hard to see. Their livery may vary but it usually comes in a diamond-patterned medley of colors that blends easily with leaves and logs. As they live close to plantations, farms and other inhabited areas, any inadvertent person could have a potentially fatal encounter with a terciopelo. Even not-so-rural areas can harbor a terciopelo.

Not everything is bad about terciopelo vipers.

– All snakes are natural pest controllers. By eating rats, mice, and other vermin they help agriculture and us.

– Batroxobin, a drug derived from compounds found in the terciopelo’s venom is being used to treat strokes, pulmonary embolism, deep vein thrombosis, myocardial infarction and hemorrhaging during surgical interventions.

– Captopril is a compound commonly used to treat high blood pressure. Did you know it was synthesized from the poison of a South American viper, called “jararaca”? These snakes belong to the terciopelo family and their venom causes dilation of blood vessels and a decrease in blood pressure.

According to data from the Universidad de Costa Rica, an average of 600 people is bitten by snakes throughout the country every year. In spite of that, Costa Rica is a reference model on how to face the problem of poisoning by snake bites. At the forefront of the fight is the Clodomiro Picado Research Institute (ICP). The institute produces several types of antiophidic serums. Additionally, it does scientific research on serpents and their venoms. The ICP distributes approximately 130,000 vials of anti-venom serum per year and works in cooperation with more than 115 organizations and groups in 31 countries.

If the worst happens and there is an envenomation by terciopelo viper stay calm, immobilize the victim and take him/her to the hospital. ALL snake bites require medical attention. Terciopelo bites even more.

– Never try to catch or kill the snake. It could be one costly mistake.

– Reduce the victim’s physical activity to a minimum to slow down the spread and effect of the venom.

– Do not attempt to suck, use a tourniquet or apply pressure on the área of the bite. Cold compresses or ice should not be used either as they could make the situation worse. With the antidote, (which has some unpleasant side effects) and proper treatment, a tercipelo bite is not necessarily fatal.

– In most cases, there is a four-hour window for the anti-venom serum to be injected before the person is indeed at death’s doorstep.

– The antidote is available only at hospitals because it is dangerous and it must be administered in an appropriate place where they can monitor and control its effects. In Costa Rica, the public health system, Caja Costarricense de Seguro Social (CCSS), provides the treatment at no cost to patients.

– Be aware that even with the serum, the venom’s quick and drastic necrotic and hemotoxic effects on the victim could cause that he/she loses a limb or part of it.

Keep in mind that:

-Terciopelo vipers ARE NOT out to get you. You are too big for them to eat. They are just going about their business.

– It is extremely unlikely you will see a terciopelo in the wild.

To be on the safe side,  when visiting any of Costa Rica’s national parks or any forested areas:

– Pay attention to your guides’ instructions. They know what they are talking about.

In Costa Rica the main emergency number is 911.

– Give ALL snakes a wide berth and, in general, leave wildlife alone.

– Keep your hands and feet to yourself. Be aware of where you put them and do not touch, sit on or move old, decaying logs.

– it is a jungle out there so an appropriate footwear and clothes selection is important. Shorts and skirts do not offer any protection so jeans or similar clothes are in order. Flip-flops or any other type of open shoes are a no-no. Wear strong snake-proof or hiking boots instead.

– Don’t go walking alone into forested areas, where the snakes are known to be, especially at night.

– Terciopelos feed on rats and mice. These animals thrive near humans. Efficient pest control will help decrease the chances of your bumping into their predators.

Snakes have been the source of many legends. For many cultures, they are both gods and demons. The primitive man considered them sacred and powerful beings and even today, they are venerated. Nowadays, we should go beyond our fear and treat them with respect, because they are not good or evil. They play an important role in the grand scheme of nature.