The Language of Being

Employers are now allowed, as of August 12th, to resume, for specific...
Read more

The Executive Power of the country has decided to call off the...
Read more

Russia announced this past week that they would soon have the capacity to produce hundreds of thousands of doses of the Coronavirus vaccine every month at the end of this year and that they would raise their production to "several million" next year
Read more
TCRN STAFFhttps://www.TheCostaRicaNews.com
Creating a Conscious alternative news network that we feel the world needs. Pura Vida!

It was a very windy day, with gusts up to 50 miles per hour. You would think
the hummingbirds would be hunkered down somewhere. But a small fleet of them
put on an incredible show in the backyard.

Six or eight of the tiny aerial acrobats swooped, hovered, and dove with
astounding agility on the buffeting currents of air. They often buzzed
within inches of my head, hovering for a few seconds at a time in front of
one’s face. They struck one like children, free to frolic to their hearts
content in a pool on a perfect summer’s day.

Though my back was only a foot from the wall, they even did numerous
high-speed loops around me, two or three at a time, as if I was a pylon in
an air race. How are they able to fly with such precision in such high
winds? 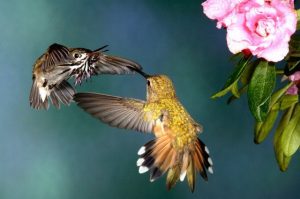 All the while they took turns feeding on the sugar water at the feeder a
short distance away. At one point, six landed at the same time, their
miniscule claws clinging to the bar as the wind swayed the feeder back and
forth. I’ve never seen more than two perch and drink simultaneously, so that
too was quite a sight.

The show went on for a full 40 minutes, with each timeless minute bringing a
deeper feeling of the hummingbirds’ inexhaustible joy. Indeed, as passive
observation grew into meditation, one realized that they were the essence
and embodiment of joy.

Playing on the wind together, they delighted in showing off their dazzling
flying skills for the human watching. There was no doubt that they were
fully aware of me, and that they were putting on a great show for a fellow
creature, perhaps in appreciation for supplying them with easily accessible
nutrients.

Their antics were so fast and there were so many of them that many times my
eyes could barely follow. There was a sense of true intelligence about them,
a manifest intelligence beyond the vaunted human abilities of cognition and
reason.

With this experience fresh in mind, I went outside to greet the day early
the next morning, as is my custom after waking. To my utter dismay, a
hummingbird was caught in the feeder.

It was thrashing around trying to free itself, its tiny foot caught in one
of the feeding holes. Pinned between the circular landing bar and the
feeder, a considerable number of its little feathers were smeared onto the
base.

Momentarily wishing I had never put up the feeder, I took the diminutive
bird gently in hand and extricated it from the inadvertent man-made trap. It
had lost quite a few feathers on one wing, and I felt certain its chances of
survival were as small as the bird itself. 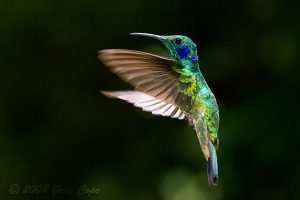 The injured hummingbird had a rakish strip of bright blue on its wings, but
lacked the fluorescent throat coloration that many of its kind have in this
clime. I could feel its tiny heart beating incredibly fast. But it didn’t
struggle, no doubt exhausted by its ordeal.

The sun was shining, and I set it on a cross section of the fence, and went
to get some breakfast. To my astonishment, when I returned 20 minutes later,
the bird was preening on the grass next to the fence.

When I returned in another 20 minutes, it was gone. There haven’t been any
cats in the vicinity lately, and there were no additional feathers on the
ground, so perhaps it managed to fly away.

Different languages often divide people, but there is a language of being
that all creatures share. Few humans know how to listen to that language,
which doesn’t have any translation or interpretation.

Indeed, interpretation has to end for one to understand, beyond words, the
language of being. Most philosophers say, ‘man is an interpretive creature,
and we inevitably live in context of our interpretations.’

That isn’t necessarily so. In watching the movement of words and their
meanings within one, especially in the presence of animals in nature, one
sees and feels an actuality beyond man and his symbols.

Employers are now allowed, as of August 12th, to resume, for specific...
Read more
News

The Executive Power of the country has decided to call off the Distributed Energy Resources Bill, which...
Read more
Health

Guaranteeing quality, good environmental practices, and authenticity when buying Costa Rican handicrafts is the objective of the Costa Rica Artisan Seal, developed through an inter-institutional collaboration between the MEIC, the Ministry of Culture, the ICT and the INA
Read more
Economy

President of Panama, Assured that he is Open to Dialogue with Costa Rica to Resolve the Conflict over Exports

Laurentino Cortizo, president of Panama, assured that he is open to dialogue with Costa Rica to resolve...
Read more
- Advertisement -