Italy was struck by a 6.6 earthquake last Sunday at 7:40 am local time, injuring at least 20 people and causing panic and chaos. It’s said to be the strongest earthquake to hit the country in three decades since the Irpina quake that killed around 2,500 people in 1980.

The epicenter of the earthquake was in Norcia, the same area that was hit by a devastating quake back in August which killed almost 300 people, and destroyed entire villages.  Thankfully rescuers were quick to arrive to help residents who ran into the streets, and also helped a group of nuns to evacuate the center of Norcia.  All of them are safe, and very few were injured.

The historic basilica of San Benedetto, built between 1290 and 1338, suffered horrible damage. The basilica is located in the ruins of a house that is said to be the birth place of San Benedetto. Its facade is still standing, but it’s core crumbled completely. Inside there were two large paintings, St Benedict and Totila, by Filippo Napoletano from 1621, and Madonna and Norcia Saints, by Vincenzo Manetti from the mid-1600s. 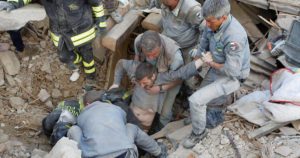 Rescuers were thanked by the Prime Minister Matteo Renzi in Rome, who promised to rebuild all the damaged villages.   “Italy has many faults, but these situations bring out the best of us. We will rebuild everything. We have the resources to do it.” said Renzi.   Curcio, the Civil Protection Chief said the main road to the most damaged area was blocked.  Helicopters were airlifting the injured, and there were six air crafts monitoring the area.  There are reports that Pope Francis prayed for the victims, “I pray for the wounded and the families who have suffered major damage, as well as for the personnel.”  Rome officials are inspecting the Colosseum and Roman Forum looking for signs of earthquake damage or cracks, in hopes of finding none. 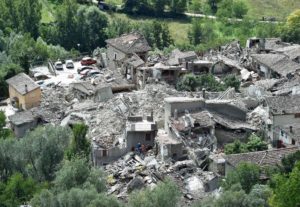 Father Benedetto from the Monks of Norcia Monastery said, “We monks are all fine but our hearts go out to those affected, and the monks of the monastery are trying to figure out if anyone is in need of their last rites. We rely, as always, on your prayers and your support.” Tommaso Della Longa of the Italian Red Cross said, “People need to understand that they need to move from there.  This area is between mountains and valleys, it’s cold even now, and snow is coming in a few weeks”.  Some residents were refusing to leave Norcia, believing that they were safer sleeping in their cars than under roofs.  “These people don’t want to leave their area because they are really connected to the region. There’s a long tradition there, they have jobs, farms and so on, so they decide to stay there.”  It is estimated that up to 100,000 people were left homeless after the quake. 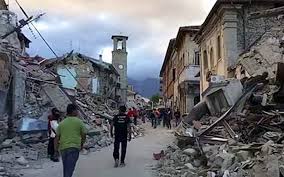 According to the US Geological Survey, the earthquake struck at a depth of 10 kilometers. There’s a fear about possible mudslides, which makes rescuers hesitant about bringing heavy equipment up narrow roads.  There have been several aftershocks since, including a 4.6 quake and another 4.5 aftershock in the same area. Curcio also said 1,300 people were evacuated to the coast, and there are thousands more waiting.  Rescuers and authorities have spent hours upon hours combing the ruins to check if there are any residents left in the rubble to rescue.

Apart from the horrible damage that the San Benedetto Basilica suffered, there were also other important religious buildings affected.  Like the San Paul Basilica which had cracks appear along the outer colonnade, the cathedral of Santa Maria Silver, the town hall, and the San Francesco Church.  Other towns like Arquata Del Toronto and Ussita were also devastatingly hit by the earthquake. “The whole town has collapsed here, there’s nothing left,” said Marco Rinaldi, the Mayor of Ussita, a municipality that was also hit by the earthquake. 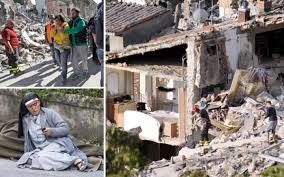 The monks are expected to be a big part of the rebuilding of the town as they have helped the residents who didn’t know what to do in the middle of the chaos, and also offered to help with everything they can.  Since the earthquake, videos and photos of monks and nuns from Norcia surfaced on the internet.  Showing them on the streets trying to calm down the residents by talking to them and praying,  and making their outstanding solidarity evident.

Because of its power and the fact that many others have occurred in the last decade, this earthquake generated so many heartfelt reactions on social media, and from people all around the world.  Expressing their solidarity, and also asking people to pray and help in any way they could.  Not only the people of Norcia, but every person who was affected by this horrible and damaging quake.