Sámara’s Sub-Par Police Station To Be Relocated… But Where To? 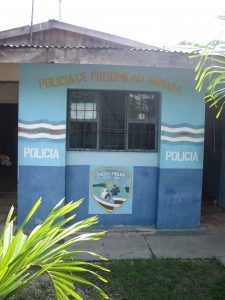 Sámara’s Chamber of Tourism (CASATUR) and Integral Development Association have joined forces and put in to motion the first plans to change the location of the Sámara Police Station. It seems that the necessity of relocating the station is clear, but the new location is not.

In the words of CASATUR Secretary Carolina Alvarez C. “the reasons [to move the Police Station] are many.” She adds that “with the development Sámara has had, [the move] is inevitable, [the police] really need an adequate place so they can step up and have greater control.” CASATUR Representative Lavae Aldrich declares, “it’s CASATUR’s feeling that the [current police] building is not worth putting any further investments in to.” She says “it’s too small, [and] it’s certainly not big enough for any growth.” Sámara Police Officer Fernando Briones agrees, saying the building “is in rater problematic conditions. There are problems with leaks and the septic tank, and [the current station] does not have conditions (such as separate bathrooms and sleeping areas) so that a woman could work here.” He says “it would be better [to have a new location because] it would be more comfortable.”

However, the site of the new would-be police station appears to be undetermined, despite a vote taken at a public meeting held in Sámara’s Community Hall on June 8th. Although the vast majority of the attendees voted for a lot located behind Super Sámara and Villas Kalimba in downtown Sámara, it seems as though the site may not be available to use for this purpose.

President of the Sámara Integral Development Association, Luis Umberto Acosta Fajardo, tells VON that CASATUR President Marco Carmona had been in communication with Nicoya Mayor Eduardo Gutierrez regarding the availability of said lot prior to the meeting held in Sámara June 8th. Fajaro says that at the time of the meeting it was understood that the site could be used for the purpose of the new police station. However, Fajardo further explains that he personally visited the Mayor in Nicoya on June 10th to discuss the lot and was told by Mayor Gutierrez that that particular lot was not his to give, and that it pertains to the ICT (Costa Rica Chamber of Tourism) for the purpose of building a park. Allegedly the site that Gutierrez is actually able to allocate to the Police Station is located in the neighborhood of Cangrejal just outside city center, Fajaro says.

Fajaro informs VON that another meeting will be held in the near future to further discuss the matter of the new Police Station location on a date not yet determined. VON tried to contact CASATUR President Marco Carmona and Nicoya Mayor Eduardo Gutierrez, but they were available for an interview at this time.