The amount of rain that will fall on Costa Rica being this country in the tropical regions of the planet have been underestimated according to the global climatic models created by NASA using the latest Satellite imagery technology by the Global Precipitation Measurement Core Systems, which underestimated the reduction of high clouds over the Tropics that have recently been observed. This phenomenon is the result of the continuing global warming trend that is reported worldwide.

Generally, rain is produced not just by the number of clouds available concentrating in a specific area but also by the so-called “energy budget” of the Planet which refers to the rate of input of solar energy into the atmosphere in proportion to the output of heat from this same system. Tropical clouds at a high altitude “trap” this heat of the atmosphere. If there are ever less of this type of clouds in the future then the tropical atmosphere will cool down continuously.

It is predicted by the scientific observation of cloud variation in the past decades that the atmosphere will generate less high clouds in response to the superficial global warming which would directly incite more tropical rains that would warm up the air to level out the cooling due to the elevated contraction of cloud availability. 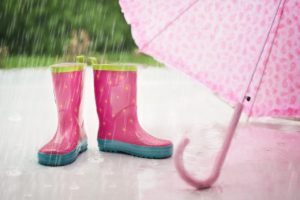 Although it may sound contradictory the rain warms up the air since we tend to associate raining with the cooling of the air around us, if you look at this phenomena at a higher up altitude of various kilometers in the atmosphere the prevalent process is totally the opposite: When water evaporates into water vapor here in the earth’s surface and rises up into the atmosphere it takes along the thermal energy that produces this evaporation and then in the cool upper atmosphere when this water vapor condenses into liquid clouds or ice particles it releases the heat brought along thus heating up by this means the atmosphere.

This scientific study done by scientist Hui Su of the Jet Propulsion Laboratory (JPL) at Pasadena California was published in the Nature Communications magazine.  It puts the reduction of high tropical cloud cover in context with the Earth air flow variation that is happening with respect to he much-publicized global superficial warming trend.

These flows at a grand scale are denominated “General Atmospheric Circulation” and include the wide zone of ascending air centered around the equator thus the tropical areas of our planets in which Costa Rica is located.

Dr. Su and his colleagues of the JPL and four universities compared the weather data of the past 30 to 40 years with 23 simulated climatic models of the same period. These observations have demonstrated that this zone has narrowed as the climate gets warmer thus causing the reduction of high clouds.

This data was obtained using the observations of the scientific team based on the thermal radiation output recollected by CERES: Clouds and Earth’s Radiant Energy System among other weather satellite instrument readings, as direct on-ground climatic data analysis which confirms a notable increase of rain intensity over the Tropics for the foreseeable future.

Read on if you want to take this important step within your company or organization.
Environment

The 10 Protagonists Of 2021 in central America

The 10 Protagonists Of 2021 in central America