Close to one hundred people gathered in front of the Ministerio de Agricultura y Ganaderia (MAG) in San Jose on Tuesday, November 6, to protest the introduction of Genetically Modified (GM) corn seeds into Costa Rican agriculture. Organized by a loose confederation of environmental organizations and concerned individuals calling itself Bloque Verde, the demonstrators were collecting signatures on a petition to be presented to MAG opposing Monsanto GM corn seeds and working to mobilize public opinion on the issue. Judging by the large number of cars honking horns and passersby whistling and calling out in support, it would appear that many Ticos are in agreement with the sentiment of the protestors. 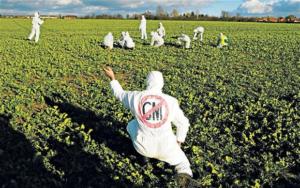 t was a passionate crowd of young and old, Ticos and Gringos, adults and children and even dogs sporting signs of dissent. Some protesters donned facemasks depicting “zombie” ears of corn to illustrate the dire results such genetic manipulation could have on the food supply and on traditional farmers in Costa Rica. Other people created a beautiful mandala design using corn seeds spread on a rainbow colored quilt to represent and honor the spirit of ancestral corn. Musical instruments including a drum and a huge horn made from the aloe plant, which is used during the Mexican corn harvest, added to the festive atmosphere.

Speakers argued that the cultivation of corn is indigenous to Costa Rica and Central America. It is based on open pollination of native plants and small family farmers are determined to rescue “criollo” or native corn seeds from pollution by GM crops. Such transgenicos, or GM seeds, can be broadcast through the air to contaminate adjacent land and can have a negative impact on organic cultivation. According to Roca Verde, GM crops are bad for the environment, harmful to the health of the people and detrimental to the Tico economy. Leaders of the group led the protestors in chants of “Fuera Monsanto de Costa Rica” and “No maiz transgenico.”

According to Ignacio Arroyo, one of the group’s unofficial leaders, they had collected close to 5000 signatures in only three days and although the turnout was modest, he was pleased with the enthusiasm of the crowd and of the audience passing by. 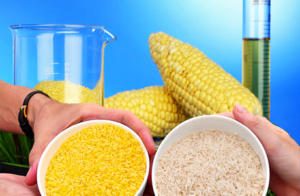 “Today is only a short step in a much bigger global effort,” Arroyo said. “We understand the role Costa Rica plays in the global economy of corn and we know what steps other countries such as Brazil, Mexico, Argentina and Paraguay are taking as part of this movement. We know we are not alone.”

Arroyo said that the group plans to continue their campaign using the power of social media and networks and they hope to have a much larger demonstration in coming weeks. Interested persons can follow their activities on their blog, http://www.bloqueverde.blogspot.com and connect with them on their new Facebook page, http://www.facebook.com/bloqueverdecr.verde.

An optimistic attitude enables us to trust that good things will happen to us. Trying to visualize what you want is better than worrying about what you fear.
Health

Deforestation, a Key Element of the Landslides in Venezuela